The inimitable Heather Mac Donald takes the Nannies to task, in her inimitable way.  This paragraph in particular struck home for me:

We set highway speeding limits to maximize convenience at what we consider an acceptable risk to human life. It is statistically certain that every year, there will be tens of thousands of driving deaths. A considerable portion of those deaths could be averted by “following the science” of force and velocity and enforcing a speed limit of, say, 15 miles an hour. But we tolerate motor-vehicle deaths because we value driving 75 miles an hour on the highway, and up to 55 miles an hour in cities, more than we do saving those thousands of lives. When those deaths come—nearly 100 a day in 2019—we do not cancel the policy. Nor would it be logical to cancel a liberal highway speed because a legislator who voted for it died in a car accident.

Bill Whittle once said more or less the same thing about accidental gun deaths:  while even one such death was tragic, the plain fact of the matter is that some freedoms come with risk, sometimes deadly risk;  and the overall benefit to our society is far, far greater than the danger that may (or may not) ensue.   Using statistics of “gun deaths” (even correct ones) to bolster calls for gun control / -confiscation is likewise irrelevant.

It’s called the price of freedom, and We The People have been balancing those freedoms against the collateral harm to individuals ever since our Republic was formed and the Constitution and Bill of Rights promulgated.  All individual rights are potentially harmful, whether it’s freedom of speech, assembly, religion, gun ownership, privacy or any of the others.

And to Heather’s point above:  driving isn’t even a right protected by the Bill of Rights.  How much more, then, should our First- and Second Amendment rights (and all the other rights for that matter) be protected, even when we know that some tragedy is bound to follow thereby?

“If it saves just one life” sounds great on a bumper sticker, but as a basis for public policy, it’s not only foolish but in many cases more harmful in the long run.  Heather again:

We could reduce coronavirus transmission to zero by locking everyone in a separate cell until a vaccine was developed. There are some public-health experts who from the start appeared ready to implement such radical social distancing. The extent to which we veer from that maximal coronavirus protection policy depends on how we value its costs and the competing goods: forgone life-saving medical care and deaths of despair from unemployment and social isolation, on the one hand, and the ability to support one’s family through work and to build prosperity through entrepreneurship, on the other. The advocates of maximal lockdowns have rarely conceded such trade-offs, but they are ever-present.

The current wave of totalitarianism and loss of freedoms caused by State overreaction to the Chinkvirus needs to be rolled back, and fast.  It just sucks that we have to rely on judges — many of whom, to judge from their records, are not especially friends of freedom — to hold back the mini-Mussolinis in their totalitarian quest for absolute power over the governed.

And just so we know what kind of “acceptable risk” we’re talking about, comes this from Fox News: 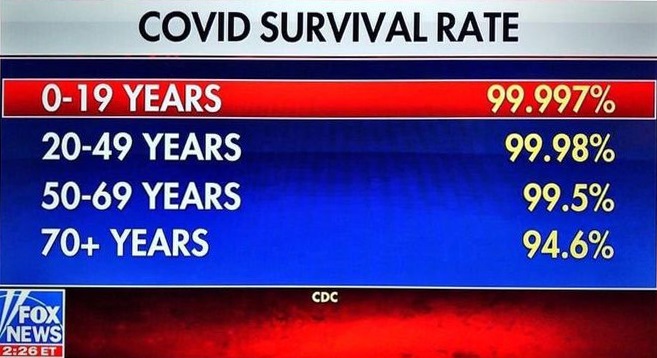