Will Smith has sought help in the wake of his infamous slap of Chris Rock at the Academy Awards.  Smith, 53, ‘has been going to therapy after the Oscars incident’.

Don’t need therapy, bro — just a testosterone injection will do the trick.

Bitch-slapping a guy for insulting your wife:  good.

Getting therapy to deal with fallout from said incident:  total pussy.

Be a man:  express no remorse and tell ’em all to fuck off.

I am curious to see My Readers’ response to this bit of bastardy, bureaucracy and pussification:

A homeowner was left disgusted after a stranger parked their Range Rover on his driveway for days.
Zekarias Haile, who lives a five-minute drive from Manchester Airport, said he waited four days for the owner of the grey car to return and pick it up. The 51-year-old man woke to find it abandoned on his driveway on Thursday and he suspects the cheeky owner had jetted off for a holiday from the nearby Jet2.com and Ryanair hub.
The father-of-two, who lives in Wythenshawe, Manchester, said: “Someone, without my permission, had put the car there and they didn’t care. I just went out and it was there. Then it was there Thursday, Friday, Saturday, Sunday. On Monday morning when we woke up it was gone. I was very angry but I resisted doing anything to the car – just. I definitely didn’t feel alright about it. We couldn’t access our garden and we couldn’t take out our bins.”
Zekarias, a lecturer in Engineering at a college, called the police but was told it was not a criminal offence and there was nothing they could do. They said Zekarias’ car, parked on the road, wasn’t being blocked in so their hands were tied.

Okay, firstly:  what kind of asshole parks his car in another guy’s driveway and just takes off?

Secondly:   what kind of pussified man does nothing about the situation for four whole days?

Thirdly:  what kind of police force won’t have the car towed?

Finally, what would you have done in a similar situation?

Where the hell were all you bastards when I was getting death threats and such back then?

Except that this take gives me an immediate Red Cloud Of Blood:

America’s feminized culture is the topic of Stephen Baskerville’s article, “Real Men Missing,” in the January issue of Chronicles Magazine. Over the years men have refused to step up to the plate and do the hard tasks that are often associated with masculinity. These include holding the line on moral issues such as illicit sexuality, profanity, and dishonesty, and showing true leadership in the family, workplace, and community. “American conservative men are now harvesting the fruits of [their] passivity,” Baskerville writes, as women have stepped in to fill the places of power that they have abdicated out of cowardice or indifference.

Baskerville, you cockless little dipshit.  “Conservative men” were not passive in the face of the appalling slide towards the liberal abyss — but when any of us did try to stem the tide, we were vilified, our families threatened with violence and ostracized until it became almost impossible for us to live.

Ask me;  I was fucking there, when academics like you were in the forefront of all the shit piled on us.  I lost not one but two jobs because of what I’d written on the topic, and a little help from so-called conservative academics might have helped a bit.  Oh wait, I forgot:  there aren’t any conservative academics, because you gutless fucks were the very first to submit to the wokist left-wing brownshirts in our colleges and universities.

By the way, I note that this Baskerville guy currently teaches  in Poland — I’m sorry, he’s “Professor of State Studies at the Collegium Intermarium” — probably because he had to flee the United States to a more conservative country which would allow him to write works like (deep breath) A Gentleman’s Guide to  Manners, Sex and How to Rule the World:  How to Survive as a Man in an Age of Misandry — and Do It with Grace.

I hate to tell you this, Prof. Baskerville, but the time for manners and grace has long since passed away.  Gentility is fine, but it’s not much good when you’re faced with a lunatic holding a Molotov cocktail over your child’s head.

Anyone who wants to see the reaction of the Left to someone even vaguely critical of their precious dogma should just see the hatred and opprobrium heaped on Tucker Carlson, surely the most genteel and polite of the conservative commentators.  I just wish that The View  would get someone like Bill Whittle or Larry Correia to debate them.  (Forget about me;  the whole show would be full of bleeps.)

I need to stop now before I get really angry.  I encourage everybody to read Baskerville’s essay in Chronicle  (as linked above).  He speaks some truths, to be sure, but he’s way off the mark in some of his other assertions.

Fuck all that.  The time for gentlemanly, mannered discussion and debate is over, O-V-E-R.  We’re going to debate like the Canadian truckers, gawd love ’em, or still more vigorously (TBD).  The Wimmyns and Girlymen are not going to enjoy the encounter.

Happily, I speak not using the current meaning of the word “ejaculate”, but from the Latin combination of ex  (out of) + iaculere  (throw).   So in the traditional sense, I mean to “exclaim” or “cry out”.  (Incidentally, the same is true of “exclaim”:  ex + clamare — to shout.)

And all because of this statement:

Sean Penn has claimed “cowardly genes” have led people to “surrender their jeans and put on a skirt”.  The actor was asked about his views on masculinity by the Independent, after stating that he “believes that men in American culture have become wildly feminised” in a prior interview.  Asked to clarify his comments, Penn said: “I think that men have, in my view, become quite feminised.”

Now, not that Sean Penn should be taken as an authority on anything, of course, but as Longtime Friend Trevor (who sent me the link) remarked:  “You were vilified for saying the same thing years ago.”  And indeed I was, when I published The Pussification Of The Western Male lo so many years ago.

And rather than link back, I’ve decided just to re-publish the old thing under the fold: END_OF_DOCUMENT_TOKEN_TO_BE_REPLACED

Apparently, men’s access to female pudenda has a new set of requirements:

Ten years ago, baby-faced men were passed over in Hollywood for rugged looking stars with more traditionally masculine looks. But today more feminine-looking actors with delicate features, shorter stature and symmetrical faces are more in demand because they appear to younger viewers, experts claim.
Gen Z audiences are drawn to celebrities like Tom Holland, Timothée Chalamet and Harry Styles who embody a ‘brand of enlightened non-toxic masculinity’, according to beauty expert Laura Kay. 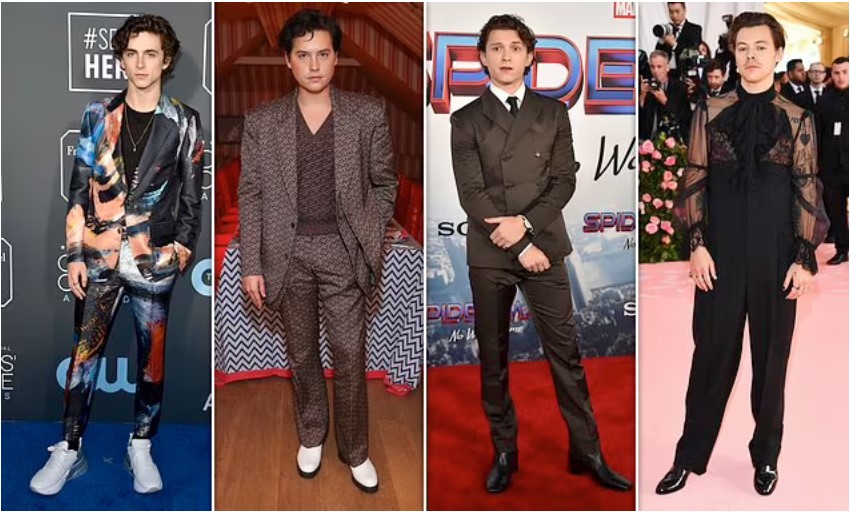 I can only hope that this trend is confined to Britishland — and to be honest, Brit men (with a few notable exceptions) have always struck me as being somewhat effeminate.

Anyway, if the above is a general trend for Gen Z snowflakes all over the world, then good luck to them.  May they reap the rewards they so richly deserve.

But I’m more pissed off by the fact that my efforts to get my toxic masculinity back in shape have all been for nothing:

Good.  I think we’ve seen enough of their guns in those SIG-only cases in what seems to be every new gun store in the country, and they’ve stretched the concept of “line extension” so far that even the gun   writers are running out of superlatives to describe the new 365 TTXLS which is such an improvement on the old (released in May 2021) 365 TTXL, honest to God.

“For over 30 years SIG Sauer has attended SHOT Show, and we did not come to this decision without much thoughtful deliberation,” the company explained in its announcement. “Our number one priority throughout the pandemic has been, and will remain, our employees. SIG Sauer has an extremely large presence at SHOT Show sending over 140 employees to the show and our pre-show Range Day event. Maintaining this presence, or even a scaled back minimum presence for 2022, represents a significant health risk to all 2,600 of our employees across our 13 U.S. locations, as individuals attending the show return to our facilities and risk continued exposure to our entire employee base.”