I draw your attention to this woman’s SHTF prep, not because of its extent — it seems quite reasonable for a family, and for an extended period of time.

Rowan MacKenzie, 38, a homemaker from Missouri, became a social media phenomenon after revealing she’s been prepping her home for 11 years because of fear of an emergency and has upped the ante, spending nearly $30,000 on supplies as a result of the intensification of the war between Russia and Ukraine.  Rowan claims most of her stock will last up to 25 years and she has a ‘flawless’ rotation system to ensure there isn’t any waste.

Her reasoning is quite sound and the photos are of particular interest;  but for a good giggle, read the article and then the comments which follow.

Did they all miss the part about her laying in extra guns and ammo?  Pity the fool…

However, her biggest piece of advice?  Stock up on weaponry.  She said: “The number one must for any bunker is defense. I would highly recommend having a few guns and knives in your bunker at all times, along with ample amounts of ammunition.  You need to protect yourself, especially in a ‘dog-eat-dog’ situation.  It’s kill or be killed and you need the best possible chance of survival.”

Also, this being (I bet) rural or semi-rural Missouri, her neighbors will have made similar preparations, so any interaction between her and them will be of the “Can I swap a cup of sugar for a can of beans?” variety.  If that.

Good for her, and a pox on the naysayers and mockers.

When New Wife first arrived here in Plano and I was giving her a tour of the new apartment, she looked a little taken aback at the extent of my SHTF supplies, as well as my grab ‘n go bags and tubs.  While she didn’t say much about it, I got the impression that she thought I was being a little too paranoid about it — after all, we live in Plano, where disaster seldom strikes.

After the flooding of a couple years back, and the recent cold winters, she appreciated those SHTF preps a lot more.

Then two nights back, we watched A Refuge Of Last Resort  on BezosTV, which was a personal video account of New Orleans during Katrina.  She wasn’t here during that little episode, so I suggested that she watch it with me.

She watched the whole thing in silence.  Then, after it finished, she said, “We need more emergency drinking water.”

I don’t have to tell you guys anything about SHTF scenarios, of course, as we’ve discussed this many times in the past.  Nevertheless, let this serve as a reminder to check your own SHTF stocks, and add / replace as necessary.

My own takeaway from this man’s story was a little different.

Firstly, FEMA is fucking incompetent — we all know that, of course, but it was the depth of the incompetence (coupled with outright lying) which gave me pause.  (Nor, speaking of government agencies, did the New Orleans police come out of this covered in roses.)

Secondly, it is even clearer to me that the more prepared you are, the less you’ll have the need to go to “evacuation centers” or any of that kind of thing.  If you are forced to leave your home (predicted flood, fire, hurricane etc.), you’ll be better off hunkering down with friends or family, or in a hotel room off the ground floor, along with all your supplies.

Thirdly, if you are going to hit the road, do it sooner rather than later.  Keep your gas tanks as close to full as possible at all times.

I certainly don’t have to remind anyone of the need to be well armed.

And finally:  if you do live in a Democrat-run shithole like New Orleans, get out now rather than later.

Apparently, the End Times are almost certainly due at the bus stop soon:

Soaring food, energy, and shelter inflation have led to what could be a new era of civil unrest worldwide. Pockets of unrest have been observed in Sri Lanka, Peru, Kenya, Ecuador, Iran, and Europe. New research forecasts a broader wave of discontent is just ahead.

“Only a significant reduction in global food and energy prices can arrest the negative global trend in civil unrest risk. Recession fears are mounting, and inflation is expected to be worse in 2023 than in 2022.”

Wow… I wonder if some giant, powerful nation could address both those issues simultaneously?

And then there’s this little kettle coming to the boil:

Now, winter in Europe is rapidly approaching when homes particularly in northern Europe will need gas the most to keep their homes warm and one hopes the weather itself will be a mercifully temperate. As recession looms, the only thing overheating right now are prices. Unemployment will surely follow.

My fervent hope is that the popular response to this is to see politicians and bureaucrats dangling from lamp posts but sadly, that’s not gonna happen.  More likely is that they’ll flee to safe havens, clutching suitcases full of our (looted) cash.

I’d take that outcome, now that I think of it.

But if you think all that’s bad, try this.

*Sweet Meteor Of Doom, e.g. this one.

Followed this link from Insty for a survival first-aid kit, but on scrutinizing the contents thereof, my conclusion is that I’d be paying $70 just for a bag — because I already have all the other stuff, and more so withal. 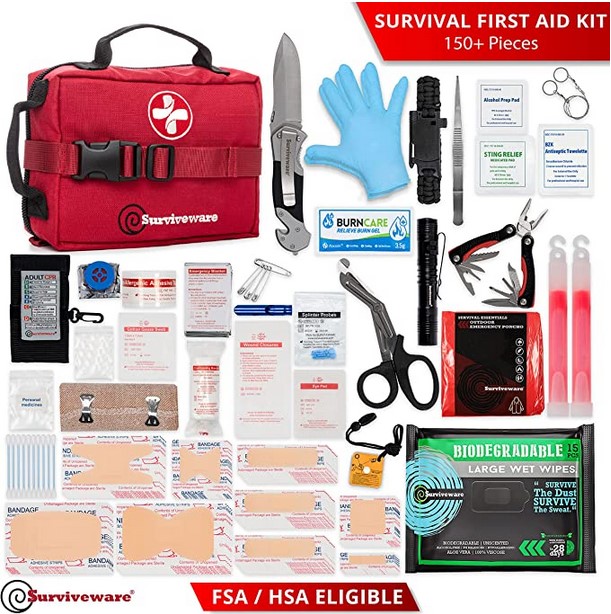 That said:  none of it is in one place, but scattered around the house;  so Job #1 is to round it all up and put it into a bag, and I’m sure I have a spare one of those lying around somewhere, too.

That’s some good whittling, right there.