Apparently, Border Patrol agents captured 23 criminals making their way over the border.  Even worse, these happened to be not ordinary “migrants”, oh no;  these were actually on the so-called terrorist watch list.

What followed was this query:

Fox News reports from a Terrorist Screening Database (TSDB) obtained under a Freedom of Information Act request that Border Patrol agents apprehended 23 migrants whose names matched the list. The apprehensions occurred between January 20 and December 27, 2021.

“The real question we need to be asking this administration is, what did you do with the 23 people from the Terrorism Screening Database you took custody of?” Morgan said during an interview. “Their arrest would have triggered further investigation by the FBI and other law enforcement entities.”

My hope is that they were “removed” by taking them out back and shooting them dead, but I’m almost certainly wrong.  Unfortunately.

I see that the “goodwill” visit of the future King of Britishland to Jamaica has been anything but, as the rather churlish response shows:

See, in the days of yore, the monarch would respond by forcibly repatriating all UK-based Jamaican residents to their homeland — along with any progeny.  (Britishland does not have a U.S.-like “citizenship through birth” policy, so they could kick out anyone they want to, pretty much.)

But these are not the days of yore, sadly, so that won’t happen.  Instead, the U.K. will have to brace itself for a flood of Jamaicans arriving in London ahead of their “independence”, as Jamaica slides into the usual Third World pit, and those left behind will discover that freedom from the yoke of British paternalism (born of slavery) will have some extremely nasty consequences.

And I hope they get it, good and hard.

From this Niall Ferguson article via Insty (thankee, squire) comes a gem:

Last week, the Rhodium Group’s Logan Wright estimated that there was enough empty property in China to house more than 90 million people.

Are you thinking what I’m thinking?  Housing for 90 million dispossessed and poverty-stricken Afghans, Haitians, Venezuelans, Mexicans, Africans and Palestinians?

Could the answer be that simple?  Let’s hear the response from the ChiComs…

Another one in Germany:

A 29-year-old Afghan man in Germany attacked and severely injured a 58-year-old landscape gardener who was working in a park in Berlin, allegedly because he didn’t like the fact that as a woman she was working, police said Sunday.
The attack in the city’s Wilmersdorf district took place Saturday afternoon, and a 66-year-old passerby, who tried to come to the woman’s rescue, was also severely injured.

I am truly curious to see what happens when (not if)  the new crop of Afghan “refugees” tries this kind of nonsense here in the U.S.

It may require just a few Righteous Shootings to help them assimilate.  Just sayin’.

I’ve often talked about how there’s no point in admitting immigrants — and especially refugees (like Rep. Ilhan Omar, for example) — when they are not interested in becoming part of the national culture, and in fact are actively hostile to it.

It seems as though Austria is starting to see the wisdom in those words, albeit too late. 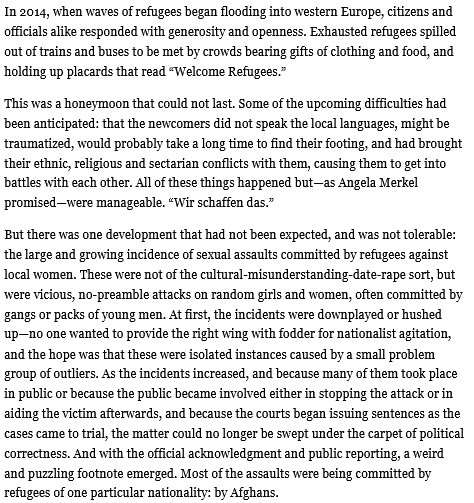 Read the rest to see exactly why.

And note that the Austrians can’t change their laws to reflect their new reality and deport said criminals and rapists back to their shithole of origin, because they are governed by EU law in this regard, and cannot change it.