Indeed he did, but not in the way one might think.  Here are the portrait and the photo, l to r: 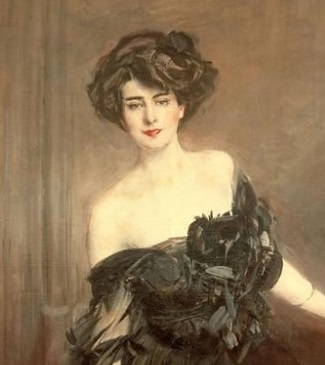 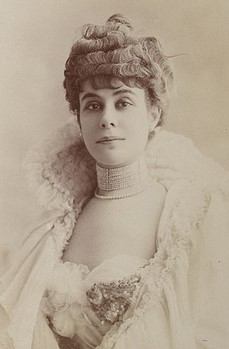 If you look closely at Nemidoff’s face (between portrait and photo), you can see that he captured it rather well.  What Boldini did was to take her hair out of that ridiculous corseted Edwardian hairstyle and tousle it into that wild, wanton bush.

…and there you have it: a perfect Boldini portrait.

No wonder they all loved him and he had more business than he could handle.

Went back among my old posts to look something up, and ended up here, where I spoke about Giovanni Boldini.

Well, so much for that search.  I ended up wandering along the highways, byways, trains of thought and their branch lines that is Teh Intarwebz.

So:  some more Boldini pics — just not the commissioned portraits this time.  I do love how he paints women’s faces, though: 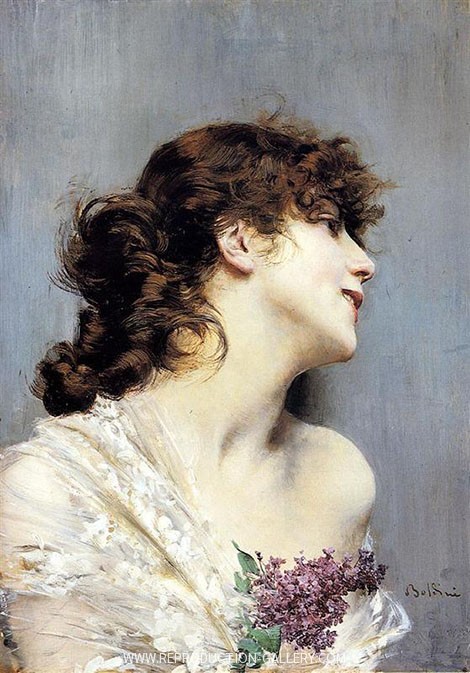 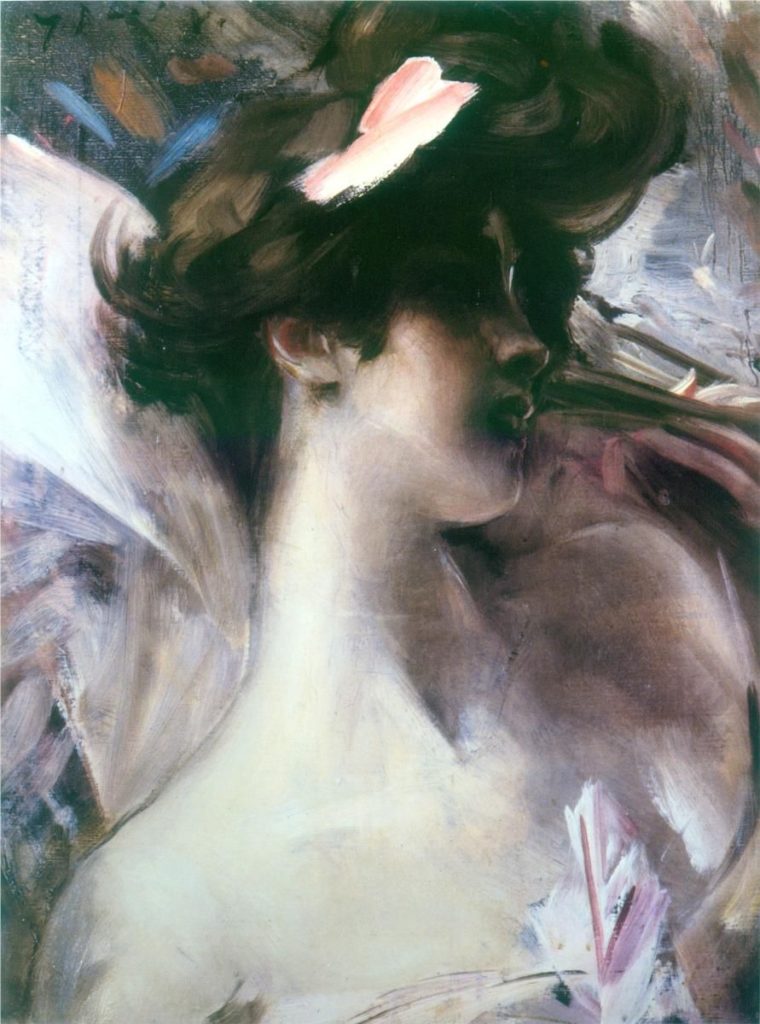 But it’s when he gets naughty that I like him the most: 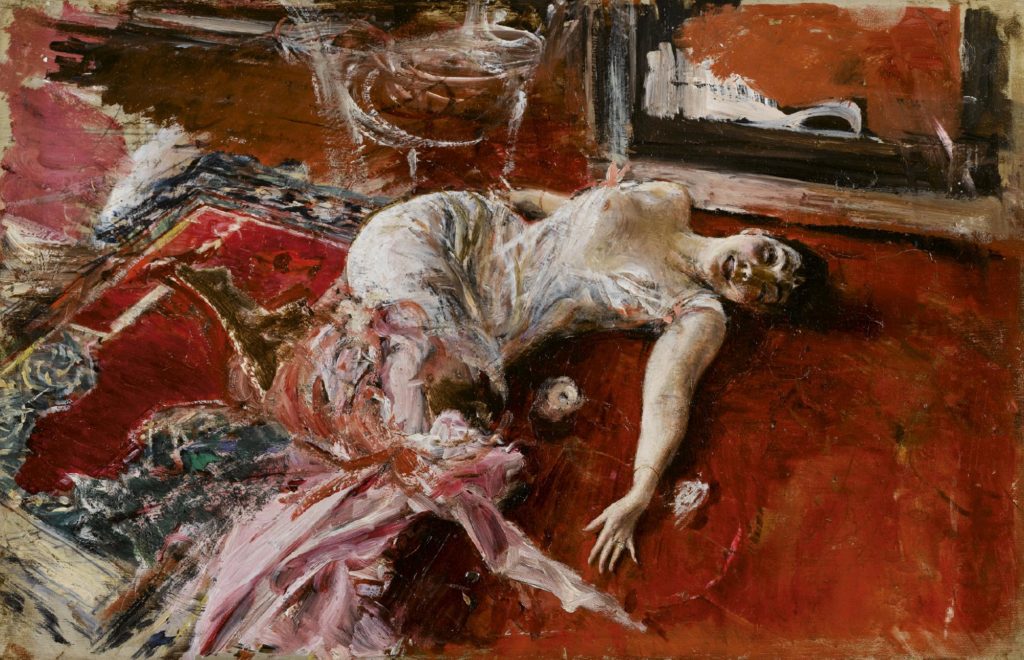 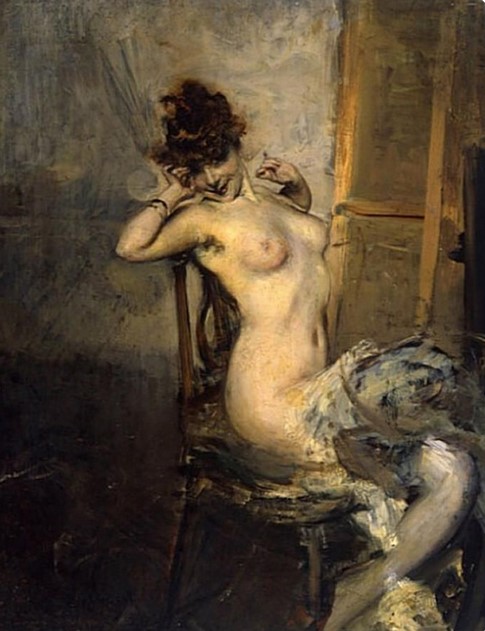 And then there was this one, which caused quite a scandal in its time: 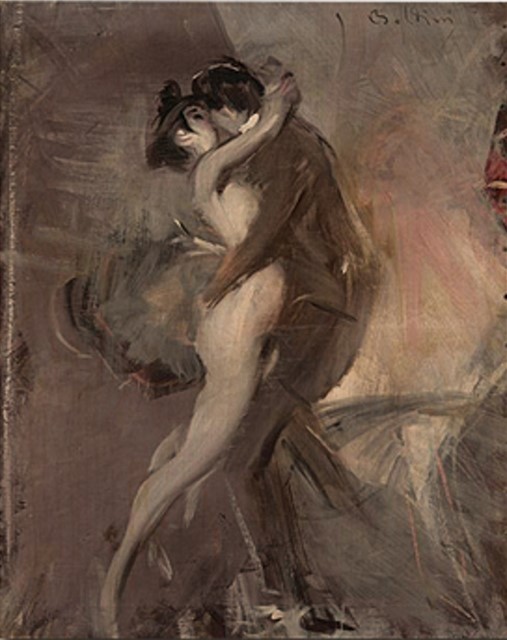 Not yer typical society portrait, is it? 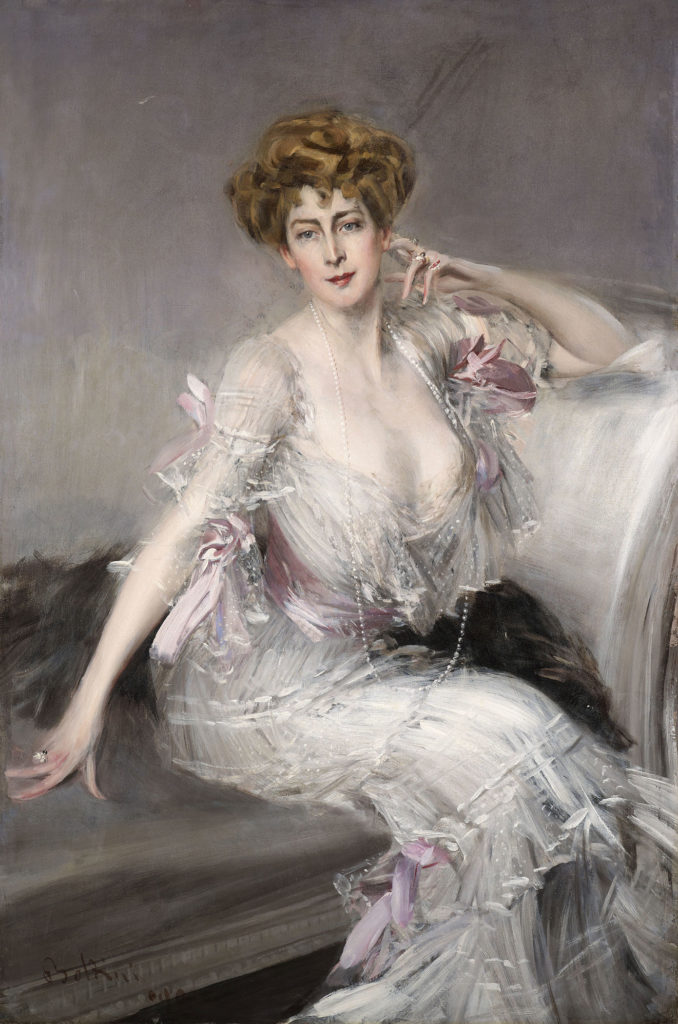 …and even some of those weren’t quite the typical Victoriana, like this one of Madame de Nemidoff:

or of Madame Pages: 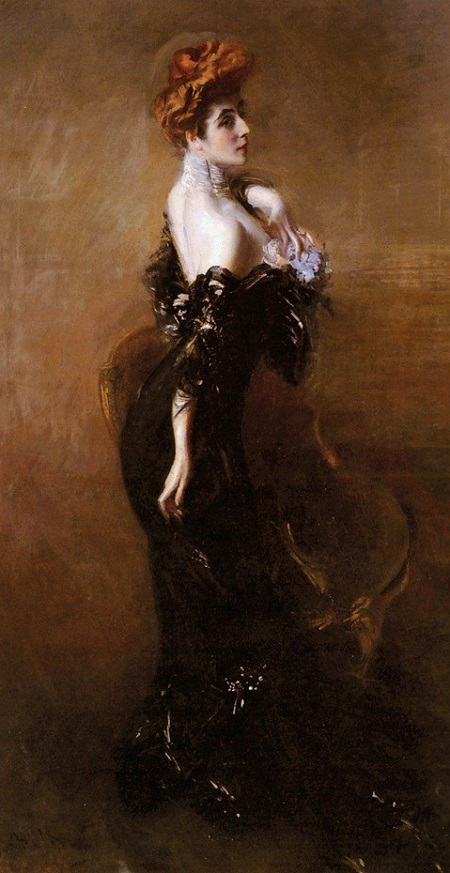 Lat night I watched an interesting movie on Netflix called Made You Look, about a string of art forgeries sold for unbelievable sums of money from the late 1980s till 2018.

Actually, I have only one quibble with the show, in that it should have been entitled Made You Look Foolish — because not only were art collectors taken in by the fakes, but art authenticators, catalog printers, auction houses and of course, art dealers (who are to the art business what agents and managers are to the music world — i.e. a bunch of venal rogues, thieves and manipulators).

Spoiler alert (although anyone with a brain could see this coming):  when works of art sell for bajillions of dollars, the incentive for forgery increases exponentially.  In the case above, all the forgeries were created by one man — some little old Chinese (quelle surprise ) artist living in Long Island NY — who had a real talent for painting in the style of most of the American abstract artists of the 20th century.  He handed them over to a guy who faked the paintings’ condition (so they’d look as though they were painted in the 1950s, say, instead of 1986).  Then the paintings were given to a shady art dealer with absolutely no history of art dealing (!!!!!) who then told a gullible art dealer in (where else?) Manhattan that the paintings came from an anonymous collector of unknown name and no history (!!!!) — and then the fun ensued, when the dealer purchased a painting by Jackson Pollock for, say, $950,000 (!!!!) who then turned around and sold it to some rich asshole for… $9.1 million (!!!!!!!!).

What astonished me is that this didn’t happen back in the 18th century, when nobody knew nothin’ about art authentication;  no, this happened during a time when a paint’s age (and even the age of the canvas) could be determined by chemical- or spectrographic analysis.  Even when this was done and the forgery exposed, nobody did anything, because there were so many reputations at stake:  those of the collectors, of the art dealers, of the art critics, and so on.  Nobody likes to look a fool, but untold hundreds of people were.

I’m going to make one statement here that was never mentioned in the movie.  Frankly, the abstract style of art is such that I’m amazed that there haven’t been millions of forgeries, all done in middle-school art classes.  Think I’m joking?  Take a look: 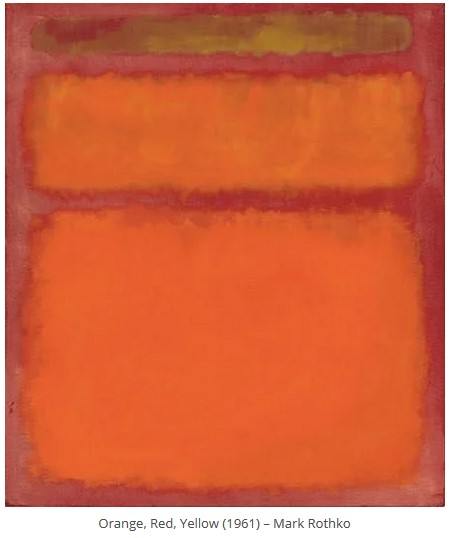 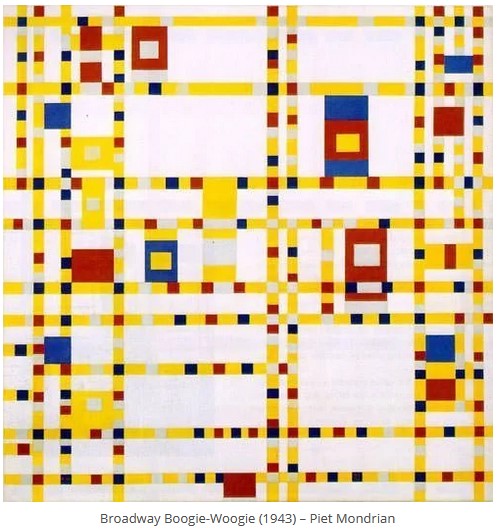 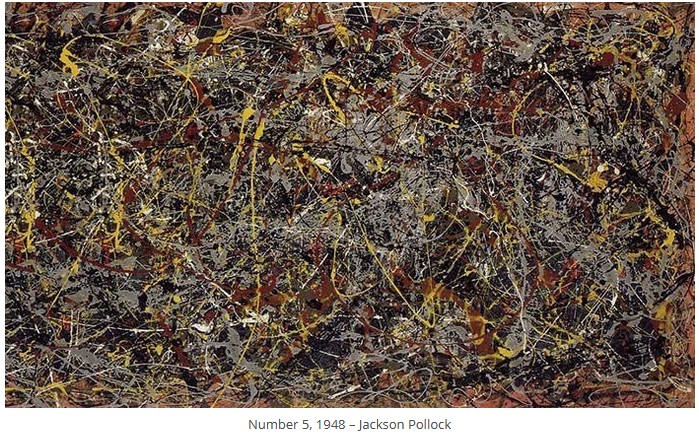 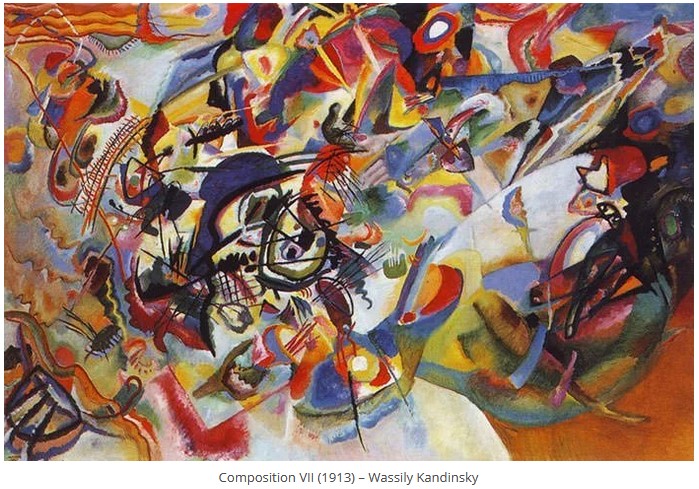 (Longtime Readers will know of my utter loathing for Pollock’s art, for all sorts of aesthetic reasons, but the others are no less awful.)

Never mind the sneers you get when you say that your 4-year-old granddaughter could paint a Rothko;  maybe she can, and maybe she can’t — but a 70-year-old Chinese artist of no particular artistic merit could, and did:  fooling all the above pretentious assholes into going into raptures about this kind of dreck, and paying lots of moolah for it.

By the way, I have no problem with people owning copies — even great copies — of masterpieces.  I happen to have a dozen or so scattered around my house myself.  Here are some, for example:  Monet’s Blue House At Zaandam : 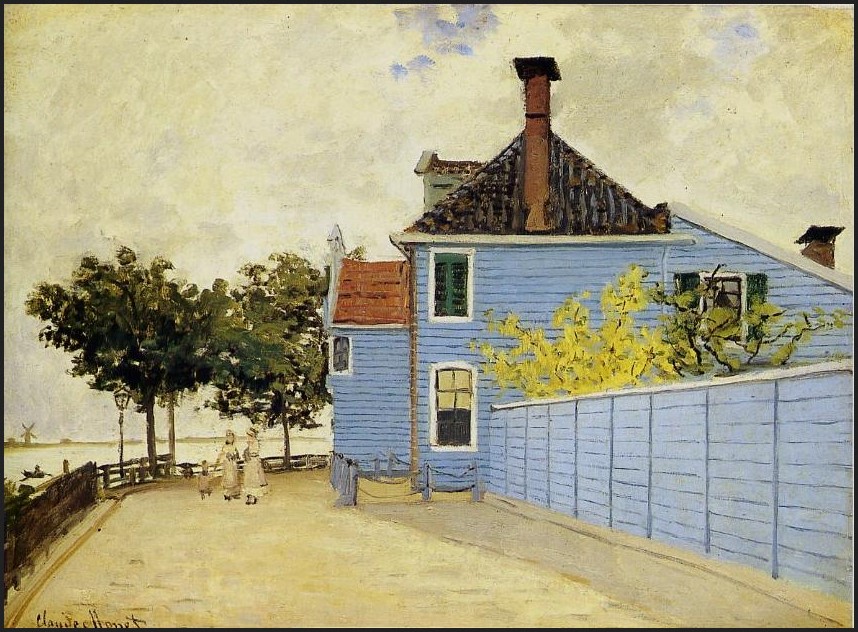 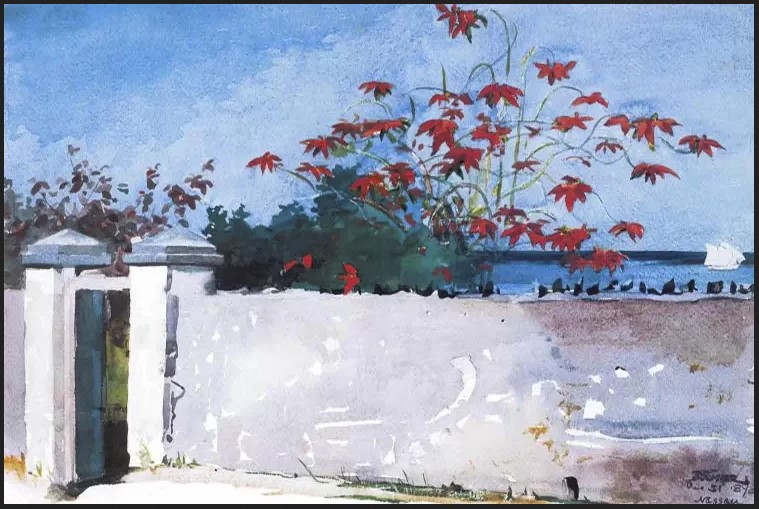 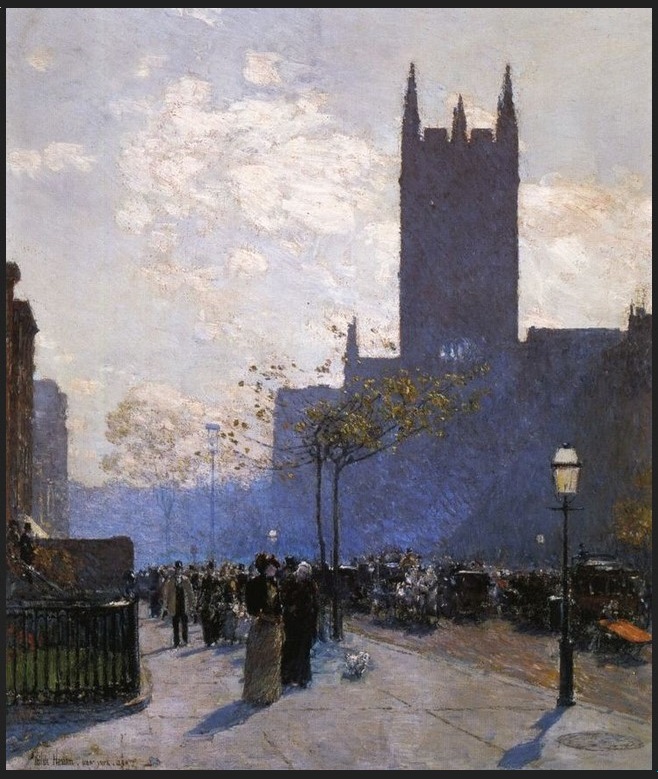 The big — giant — difference between me and those rich suckers is that I paid about $80 (eighty) each for my copies (including shipping), and I cheerfully admit that they’re not originals.  (They come from iCanvas.com, by the way, and they’re created by machines using acrylic paints which look so like the original oils that it makes little difference.)

They’re also Impressionist paintings (none of that abstract splashing and daubing for me, no thank you).

I have to tell you that even if I won a huge lottery, there is no way I would ever pay millions for an original, no matter how much I may love the artist.

Especially when the “original” may turn out to be a fake, painted by a little old Chinese guy in Long Island.

Sometimes, I wonder why we bother trying to create any new art at all, when it’s not only been done, but been done better.  In my wanderings along the Intertubes, I happened upon this little Art Deco piece: 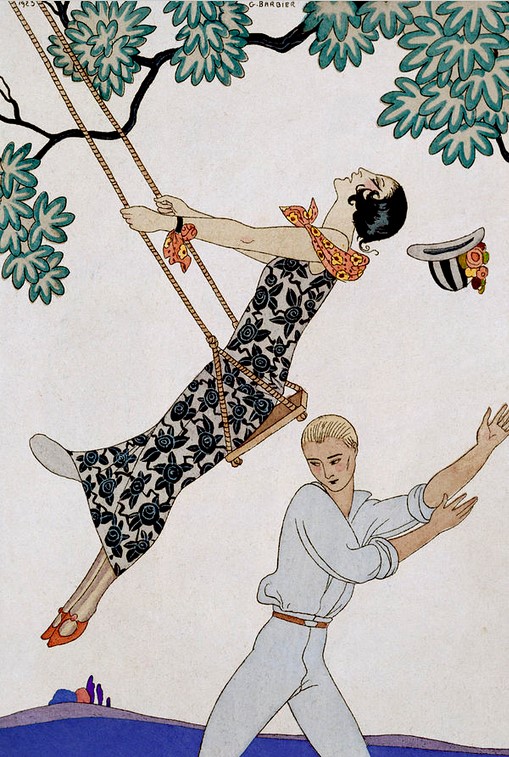 It’s called The Swing, and was painted in the 1920s by Georges Barbier.

Alert Readers may recall that there’s been another artwork on the same topic (and title) featured on these pages, to whit, the one painted by Jean-Honoré Fragonard back in 1767: 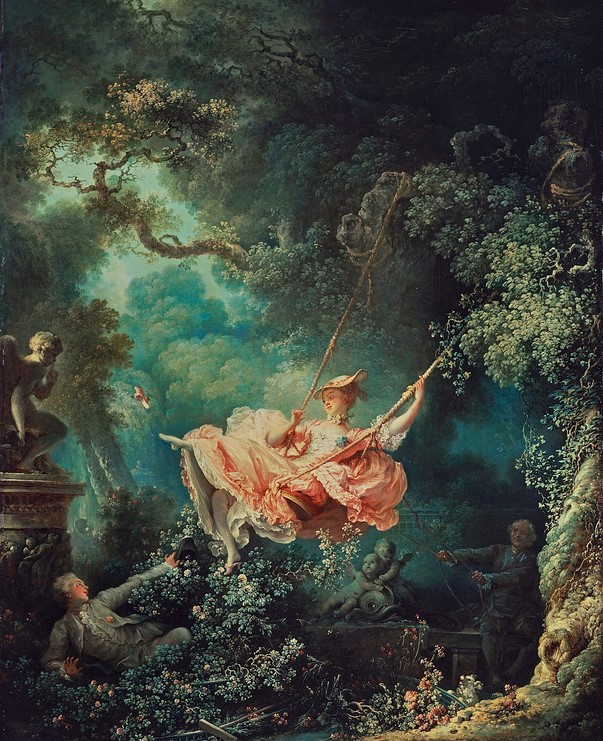 Sorry, but I prefer the rococo playfulness of the later over the spartan coldness of the former — and I love Art Deco, generally speaking.  (For those interested, I talked about the Fragonard piece here — note the post date.)

That’s not to say that Barbier is a bad artist, of course.  Note La Jambe  (“The Leg”), for instance: 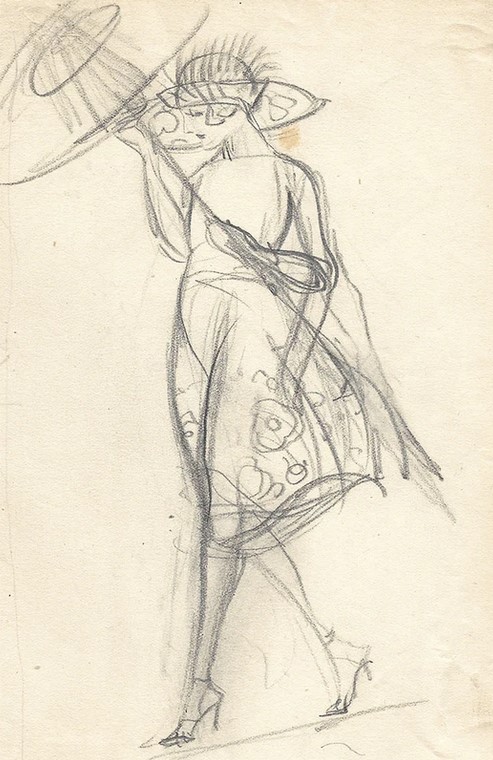 I’m not generally into sketches, but I’d have that one on my wall in a heartbeat.  And his Le Grand Décolletage  (“The Backless Dress”) is absolutely brilliant (and the man’s expression is priceless): 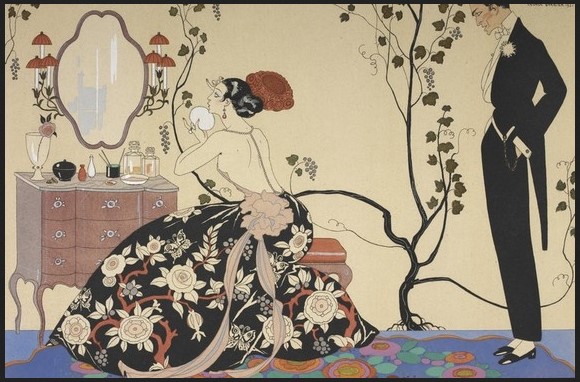 See what I mean about Now And Then?  That “fashion” is very popular nowadays with celebrities;  but they did it back then too, and better withal.

Everyone owes it to themselves to visit the South of France, especially the Provence and Louberon areas.  There’s something different about the place, and not just the architecture and scenery:  even the light is unlike anywhere I’ve ever been.  When you see artwork as painted by Cezanne and Van Gogh, you look at the light and think that the golden tint that diffuses the scenery is unrealistic or even fake, but it isn’t — it really does look like that.  (It’s best visited in summer, by the way:  winter has a different light altogether, as I discovered when I toured the area with Longtime Friend Knob a couple years back.)

Anyway, all that is to introduce an artist I’ve never seen before (introduced to me by New Wife, by the way), who apparently specializes in painting scenes from the Midi:  Laurent Parcelier is his name, and here’s an example:

This one serves as the wallpaper on my laptop as we speak.

Yes, that’s exactly what the sunlight looks like in Provence — I’ve seen several places that could be carbon copies of the above.

You can find some of Parcelier’s other works over here.  Unusually (for me), I like just about every single one of them.

Enjoy browsing.  And the website, WOoarts.com, has some other interesting artists as well.