As always, we should ignore all government pronouncements as to the state of the economy.  Thus, when we are told that “recession is not coming” or “inflation is temporary”, we should instead look to what’s actually happening.

We all know that over the past dozen or so years, Christmas spending has moved away from High Street to the Internet — most especially to places like Amazon.com, to mention just the biggest.

Therefore, as we approach this festive [sic]  season, we would expect that Amazon would be hiring staff to handle the increased demand for merchandise, yes?

The New York Times reports that according to verified sources, Amazon plans to reduce its corporate and technology workforce by as much as 10,000 employees as soon as this week, the largest downsizing in the firm’s history.

First Task for a GOP Congress: Subpoena the Jan. 6 Committee

With all due respect:  fuck that nonsense.

The first task for a GOP Congress is to stimulate the economy, which they can do not by playing meaningless little political games like the above, but by reining in government spending — the management of which, lest we forget, is the primary purpose of Congress.

Here’s a pro tip for the politicians:  if the economy is whizzing along, unemployment is close to zero, people’s retirements aren’t being eroded by inflation, energy costs are low and all the things that make for a happy populace are in place, then you won’t have any problem getting reelected (which, lest we forget too, is the primary focus of all politicians — yeah, I know, it sucks but there it is).

Unfortunately, reining in public spending is difficult — it shouldn’t be, but to our betters in Congress it is — whereas making cheap political gestures (e.g. nailing the Jan 6 clowns or “impeaching the President”) are very easy, even though they don’t do diddly about making the voters’ lives more affordable.

You want some ideas?  Sure.

Reduce every single government department’s budget by 25% (this number being close to the actual rate of inflation for the past two years).  No exceptions.

Start the process of repealing the 16th Amendment, towards an end goal of a replacement Amendment which institutes a flat, universal, no-exemptions income tax of 5% that can only be raised by a Congressional (both House and Senate) vote majority of 75% — or, even better, repealing all wage, corporate, estate and cap gains taxes to be replaced by a national end-user sales tax.  (I can dream, too.)

Pass a law which institutes a blanket “sunset” provision of ten years for every law in the U.S. Code, past, present and future.  (If a law’s that good, it should pass a re-vote easily;  if not, it should die a well-deserved death.  If this makes Congress too busy to create more laws, that’s a feature, not a bug because we have too many laws on the books already.)

Start the process of repealing the 17th Amendment.  The state legislature, not the people of the state, should decide who should be sent to represent the state’s interests in Congress.  (The people can control this by voting for their U.S. House and local legislatures, as originally envisioned by the Constitution.)

Of course, there are more suggestions, many more.  But none of them have anything to do with empty political gestures.

I see this little snippet:

Prices paid by U.S. households surged higher in September as a wide range of goods and services became more expensive.

Prices rose 8.2 percent compared with a year earlier, the latest Consumer Price Index showed on Tuesday, evidence that the price stability sought by the Federal Reserve remains an elusive and distant destination.

Way I see it, inflation should be measured across categories which hit the average person the hardest:  food, fuel and utilities (FFU).  All the rest are pretty much non-essential, other than in an emergency situation.

In my case, when I scrutinize my budgeted vs. actual expenses spreadsheet, the FFU inflation is running at about 23%, comparing the latest two months of this year’s expenditures to the same two months of last year.  Gasoline costs, of course, are about 28% higher, even with me cutting back on my driving;  food is about 20% higher (once again, “buying down” in terms of quality/quantities), and utilities are about 15% higher (and Aug/Sep was actually warmer in 2021 than this year).

None of the above is even close to the “8.2%” (LOL) that all these shitheads are talking about.

We are being lied to, and I really don’t like it.

Here’s a simple explanation for rising grocery costs, from the perspective of a baker: 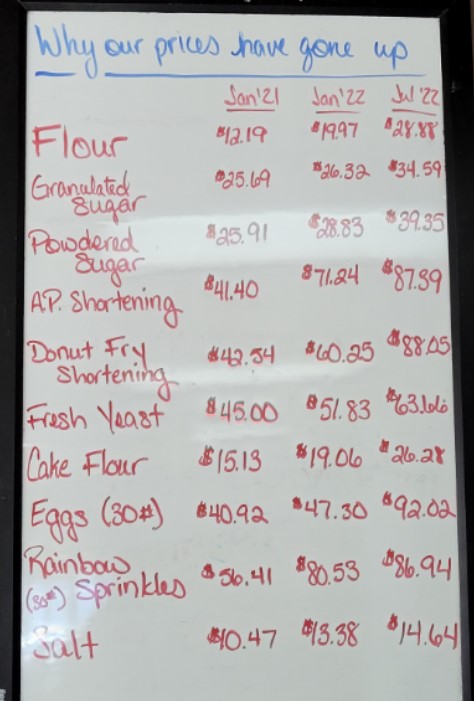 …and make no mistake, this is happening all over the place.

Can we hold both the mid-term and presidential elections tomorrow?

Salma Zito has done it again:

Café Raymond is a favorite destination and, as usual, both floors, the balcony and the sidewalk tables at the diner are packed with patrons.

None of the people waiting for his signature stack of ricotta pancakes stuffed with blueberries, his home-cured smoked salmon and caper platter or his savory sunny-side-up egg and brisket hash have any idea the man behind the kitchen counter — Ray Mikesell — has placed his beloved restaurant up for sale. He’s calling it quits two decades after he returned home from Baltimore to raise his children and carve out a life in Pittsburgh.

Through tears he says he simply has had enough — not of his customers, not of creating new dishes or specialized drinks, but of all the uncertainty that has dogged nearly every small businessman in the country since the beginning of the pandemic.

“It started with COVID and just over time, the uncertainty, the stress of trying to stay open, the inability to hire people, the underlying tension in society, the inflationary cost of everything you need to purchase to create quality food, that is, if you can get it…” he says, his voice trailing. He stops and pauses to hold it together.

The food costs are crushing him, he said, but so is the cost of doing business, period. His utility bills have skyrocketed, as has the cost of fuel to pick up fresh meats and vegetables from local farms or to deliver food for catering jobs. The costs are crippling, he says, and they are creating a barrier to investing in a business he has loved for so long.

“It just breaks you down no matter how strong you are,” said Mr. Mikesell.

Here’s my take on this.  Every time a politician says he cares about small businesses and their owners, he’s lying in his teeth.

This new crowd of socialists (including, alas, the Socialist Lite Republicans) absolutely loathe small, successful businesses, for the same reason they hate people owning cars: having your own car gives you freedom of movement, and your own business makes you part of a community, a community that binds you to itself because they now have the freedom to decide when, where and what they want to eat, and not have to go at specific times to a dreary commissariat like the hapless Winston Smith in Orwell’s 1984, and be fed the same slop and gruel as everyone else.

And the government absolutely hates that you have those freedoms.

If that’s not the case, please then explain to me why commuter and passenger rail systems are so popular with neo-socialist governments and why, when businesses like that of Ray Mikesell experience the same ghastly misfortunes (created, it must be said, by government), the government policy does absolutely nothing to help those businesses except by ladling out one-time, piddly subsistence-level “incentives” instead of addressing the main issues that cripple both the businesses and their customers:  soaring inflation (created by the government printing too much money), high fuel prices (even though we are the most self-sufficient energy-producing nation on Earth), the double whammy of ever-higher food prices and shortages (in America!!!), and logistical / transport operations that are crippled by (all together now) government regulations.

I know that anecdotes are not data — except that they are, when the owner of a business like Café Raymond is not a statistical outlier, but just one of tens of thousands in a similar or worse predicament.

Explain to me why Ray Mikesell, and all those other business owners, should not just quit and go somewhere else.  Explain also why the millions of ordinary people who are affected by the closing of small businesses and their own personal misfortunes should not be heating barrels of tar, oiling ropes, and loading up their semiautomatic sporting rifles.

But then we’re the bad guys.  Yeah, right.

Retailers and logistics operators are struggling to find space to store the flood of goods that have swamped warehouses and weighed on their balance sheets.

Warehouse owners say more retailers are looking to add storage capacity, both for goods now reaching their networks of stores and distribution centers and as they prepare to keep more inventory on hand long-term to guard against stock-outs.

What the article does not mention is that “forward buying” (the industry term for this activity) is also a retailer’s hedge against inflation:  buy at today’s price, to sell at tomorrow’s (higher) inflated price, and use the profits to forward buy still more, until inflation comes back down.

We Americans have been sheltered from the latter by our traditionally-low inflation rate. but now we’re going to feel just like consumers in Third World countries, for whom continuously-high inflation is an everyday fact of life.

Yet another reason to hate this fucking Democrat government.