I love headlines that make me want to throw the gin bottle across the room:

…took the “reigns”?  Once again, editing by Spelchek.  Fucking morons.

Still, it could have been worse;  he could have taken the rains, and made the thing even wetter than it turned out to be.

Then we have this silliness: 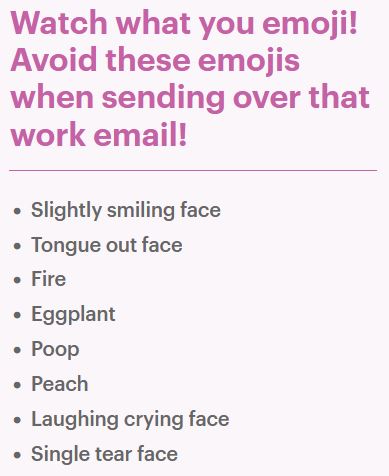 If I were put in charge of a business today, probably one of the first things I would do is make the use of all “emojis” in corporate communications a cause for immediate termination — whether in internal emails or texts, and certainly in client communication.

Why?  Because a business is a serious thing — there are profits to be made, customer- and client relationships to be forged, and decisions made can have long-term implications and outcomes.

And serious business requires serious communication, not fucking chat-speak shorthand (and by extension, the same goes for acronyms like “AFAIK” and “IMHO”).

There’s no excuse for using any of the above.  “But it expresses what I mean much more quickly and efficiently”  is the common whine in their defense, which tells me that you are a) lazy and b) unable to write / communicate properly.  Neither of those shortcomings is likely to endear you to me, the boss.

I think that this foolishness is in keeping with the modern yoot’s belief that work isn’t serious, that employers have to make employees’ lives easier — safe, yes;  easy, not so much — and it all feeds into the scenario that today’s workers feel that they’re entitled to a job that has few rules, few restrictions on their behavior, and few demands on their intellect (such as it is).

This “work from home” nonsense is another flea on the corporate body.  I once had a job where I worked from home, but only because the (start-up) company was based in Florida and couldn’t afford to relocate me.  Even so, I made a point of spending a full week each month in Florida to meet with other executives and employees, and most especially to justify my continued employment to management.

The way I see it is that if you live closer than twenty miles from the corporate office, you should come in to work every day.

“But I’m just as efficient working from home as from the office!”  (which is a total lie, and everyone knows it) which carries the implication that the employee and not management can set the standard for efficiency.

“But I don’t have to be in the office to work!”  comes the next wail, as though management should have to justify the company’s employment requirements to the employees.  “I decide the working conditions — and if I say you have to work in an office, then you’ll work in an office.  Otherwise, hit the road.”  (or “FIFO” — hah!)

I think it’s the insufferable arrogance that all the above demonstrate that makes me want to walk around with a cane, lightly swatting people who offend me with their attitude and laziness.  (I know, that’s assault — another fucking example of corrective action turned into a criminal misdeed, don’t get me started.)

Long ago, I interviewed a kid for a junior executive position, and was completely floored when he asked me how much access he’d have to senior management, to communicate (as he put it) his “ideas” for improvement.  He was equally taken aback by my response:  “What makes you think that your inexperience qualifies you for such access?”  I then got the “fresh eyes” spiel, whereupon I pointed out that he shouldn’t be so arrogant as to assume that his fresh young eyes were the first such that had ever started work at the company.

Of course, he didn’t get the job — and was somewhat hurt when I told him why I’d made that decision.  (In those days, one actually communicated with applicants when turning them down, instead of ghosting them.  Don’t get me started on this little example of corporate / individual cowardice.)

Elephant herds tend to survive (and thrive) because the older bulls keep the adolescents in line.  In today’s culture, adolescents demand that they should run the show, even though history shows that uninformed opinion and little experience ends up in disaster. One of my favorite movie storylines is that of Big (1988), where Tom Hanks is miraculously transformed into an adult, and whose idea for a toy company makes him a corporate hero.  However, his next idea is terrible, and had he not reverted to childhood, catastrophic failure would have been inevitable.

Never mind history (all that old stuff);  one has only to look at today’s White House and its Cabinet of lightweights like Harris, Buttigieg, Granholm and Raimondo  to see the consequences of such folly.

The business world is no different, by the way, as witnessed by the ineptness and uncaring attitude of adolescent children like Zuckerberg and the twerps at Google, whose “life is just like a game, dude” perspective is equally catastrophic for society.  Great ideas for a start-up, but not so good (okay, terrible) for the long term.

Unfortunately, unlike with Tom Hanks’s Big character, there’s no easy way out for the rest of us who have to live with the Bidenesque- and Metaversal catastrophes.

And while these twerps, insulated from looming catastrophe by age (Biden) and wealth (Zuckerberg), might say “BFD, dude”, the same is not true for the rest of us.

It IS a Big Fucking Deal.

In an otherwise-enjoyable article, The Federalist saith:

“Beginning in 2016, the Democratic Party descended into the politics of hystericism.”

The word you are looking for (or should have been looking for) is hysteria.  It’s a perfectly good word, has all sorts of linguistic roots, and should not be subjected to Jesse Jackson-style orotundity.

…and I don’t care.  Because once again, my reading’s suspension has taken a pounding.

You Brits are supposed to have invented the language;  why can’t you fucking speak it?

Ummm “been sat” ?  What the fuck does that mean?  Should it read “been sitting” or “sat” or (what I think they wanted to say, but I can’t really tell) “left to sit”?

Creating compound verbs without regard to proper tense grates on me more than a Hillary Clinton campaign speech.  Here’s another example of the same illiterate bullshit:

“He was sat on a bench” — nice mix of past imperfect (was) with the past perfect (sat) there, you illiterate asswipes.  Correct usage:

“He sat on a bench”  BUT NOT a combination of the two. 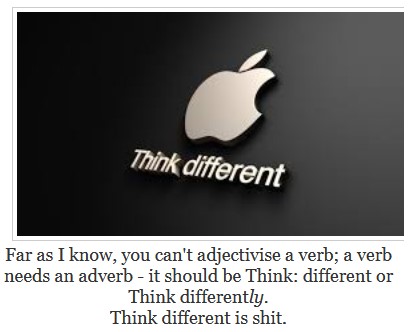 …and so say all of us.  What you should do, Gentle Readers, is not tarry here pondering such weighty grammatical sins;  rather, you should speed over to Mr. Ishmael’s to see the rest of his excellent rant about, well, everybody.  (He had me at “That Albino Cunt Johnson”, a.k.a, the soon-to-be-ex-BritPM, but it’s not the only gem.)

Invective at its very finest.