Perry De Havilland has a few choice words to say about this little situation:

Japan aims to change the way Japanese names are written in English by putting the family name first, the same way they are written in Japanese, in a triumph for conservatives keen to preserve traditional ways in a fast-changing world. Education Minister Masahiko Shibayama proposed the change to Cabinet ministers on Friday and the government will now study how to implement it, the top government spokesman said […] Foreign Minister Taro Kono raised the suggestion in May saying foreign media should write the prime minister’s name in the traditional way – Abe Shinzo.

Shinzo Abe can fuck right off, because that is not correct when using English. Follow your own heathen customs when using Japanese, old chap, but no government gets to decide how English is used, that sort of bullshit only happens in France and Japan.

Perry and I have had our issues in the past because I’m conservative and he’s a librarian, but on this topic we are 100% in accord.

…or maybe it was “grass”, but either way, the result was the same:  a perfectly good word was hijacked by bastards in order to make something socially unsavory become more acceptable.   Hence “gay” for homosexual — deeply ironic considering that homosexuals in general are the gloomiest and most unhappy people on the planet.

Now, of course, we have a similar situation, only now it’s words hijacked by Big Tech:

I have a very dear lady friend with the ancient and lovely name of “Alexa”.  She’s considering renaming herself as “Lexie” (a nickname), simply because Amazon’s electronic Stasi toy has become ubiquitous in ordinary conversation — and that’s not to mention all the jokes made when people get introduced to her.   (As she puts it, you can only hear “Alexa?  Turn on the coffeemaker” so many times before it starts getting really  old.)

And it’s all quite unnecessary.  Tech firms should actually create names for their products instead of lazily co-opting existing words or names.

We can talk about homosexuals and hippies some other time.

Finally, someone has taken a stand:

A judge flew into a rage in court yesterday after being presented with a charge sheet littered with spelling mistakes and grammatical errors.

In an extraordinary outburst at the Old Bailey, Judge David Paget bemoaned declining standards of written English and branded a bureaucrat from the Crown Prosecution Service an ‘illiterate idiot’.

In the papers, the official had consistently misspelt the word ‘grievous’, four times accusing the defendant of ‘greivous bodily harm’.

The judge also slammed the bureaucrat for stating that the defendant had used an offensive weapon, ‘namely axe,’ instead of ‘namely an axe’.

After reading the charge sheet the judge threw the papers down on to the bench in disgust and fumed: ‘It’s quite disgraceful. This is supposed to be a centre of excellence. To have an indictment drawn up by some illiterate idiot is not good enough.’

That noise you hear in the background is thunderous applause from the Literate Nation.

I am so sick of seeing misspellings in public documents (to say nothing of in newspaper articles). And for those who would substitute the stupidity of “alternative spelling”, allow me to castigate them as fucking morons.

I don’t mind the occasional misstep, especially in a live format like blogs or comments thereto. What I detest is repetitive misspelling—because to me, that indicates a drift towards illiteracy. And I don’t excuse “their” for “there” (and vice-versa), “your” for “you’re” (ditto), or any of the onomatopoeic blunders which bedevil the English language.

I am especially harsh when people refuse to use basic spellchecking software when they have it available.

Words are important. Spelling is important: it’s a basic tenet of communication that the people doing the communicating have a common method of discourse—did I say “basic tenet”? I meant axiomatic.

Spelling is the first building block—some would say the foundation—of shared language. To litter the place with “alternatives” at best slows the communication process down (like trying to decipher “cn i haz yr tlno?”), and at worst it undermines the language itself.

And don’t give me that shit about how English is a “fluid” language or any of that jive. I have no problem with introducing a new word to the English language, especially when an equivalent is non-existent; but if a perfectly decent descriptive word already exists, why clutter the language with a bunch of “near-spellings” which serve only to confuse, and render the lazy the equivalent of the diligent?

Back when I were a lad — this would have been just after they discovered the wheel — it was common practice for a teacher to smack your hand with a ruler each time you made a mistake in your grammar.

So I’d like to find the person who did the copy for this sign, and whack their grubby hand three times: 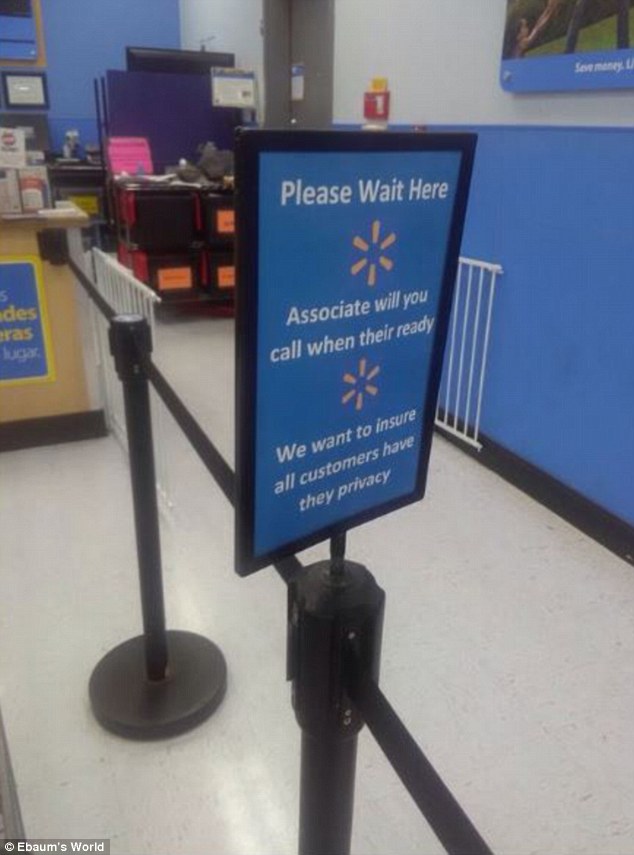 The first transgression is easy:  their  for they’re  — or to be an even bigger stickler for form (and I am), “they are” because an apostrophe on a sign is a big no-no.  That said, I’ve pretty much given up on complaining about the “their” / “they’re” / “there” mistake because most people nowadays are fucking illiterate and are either too uneducated or too lazy — both are inexcusable — to bother with correct grammar.

Ditto the incorrect use of the word they for “their privacy” in the sign-off statement.   Without bothering to check, I’ll take an educated guess that the copywriter is Black because this grammar is right out of Ebonics 101.  (I may be wrong, but I doubt it.)

The third  transgression on the sign, however, is one that drives me absolutely crazy, and if offered a ruler and the offending copywriter’s hand, I would instead deliver a resounding smack to the side of the fool’s head with my open hand.

Folks, this isn’t difficult.  If you want to make sure of something (e.g. customers’ privacy as in the above), that is to “ENsure”.  If you’re going to “INsure” something, you need to call Liberty Mutual and take out a policy.  So unless an INsurance company is going to pay out money each time Wally World breaches someone’s privacy, the correct word is “ENSURE”.

And speaking of Wally World:  whoever hired the moron who wrote the copy for this sign also needs not a smack on the hand but an almighty kick in the balls.  I know that WalMart generally feeds out the bottom of the staffing barrel because they’re too stingy to pay decent wages, but that doesn’t excuse this.  Nothing can.

FFS, I need to stop reading so early in the morning:  it’s barely light outside and I need a bloody gin & tonic already.

Sometimes, I could just spit. Most recently, when reading Kruiser’s comment on Trump’s surge in support among Black men (not “males” — another pet peeve), young Stephen made the following statement:

“Yes, the numbers are small, but doubling up is better than doubling down.”

…which makes no fucking sense at all, does it? I know why he said it that way, and it’s a cute juxtaposition, but Kruiser just comes  off as illiterate when he utters such mumbo-jumbo.

For the benefit of good grammar:  “doubling” by definition is growth — i.e. “up” — so “doubling up” is redundant. Next: “doubling down” is a gambling term — i.e. not appropriate in this context. What Kruiser meant to say was that in terms of Trump’s popularity among Kanyes, going up is better than going down, and the correct expression of which is quite simple:

“Doubling is better than halving.”

Sometimes I wonder why I bother…