Here’s one which makes me believe that some cops need strangling:

Sussex Police has threatened a women right’s group founder with a hate crime arrest after a rally two months ago where her group was attacked by pro-trans activists.  The force told mother-of-four Kellie-Jay Keen an allegation made about her that she used ‘words or behaviour to stir up hatred on the grounds of sexual orientation’ was now being investigated.

In an extraordinary phone call released by Standing For Women founder Kellie-Jay, one officer said she could be arrested if she did not attend a ‘voluntary’ interview.

In the first place, it’s a bullshit charge (except that it’s in Not-So-Great Britain, where it’s legal), and in the second, just about any judge in the civilized world should throw this nonsense out the back door, with prejudice.

But apparently calling militant trannies a bunch of sickos is A Bad Thing, so Our Heroine will doubtless be walking the plank soon.

No wonder the Brits ban ownership of AK-47s, because in cases like this…

A Florida man was arrested for attempted murder after a woman was transported to the hospital with a hatchet protruding from her head.
According to the Pinellas County Sheriff’s Office, deputies had responded Tuesday at around 10:30 a.m. to an attempted murder.
Deputies located the woman, 56, with a hatchet protruding from her head. She was rushed to the hospital with life-threatening injuries.
The wannabe-axe murderer had fled the scene of the attack before deputies arrived. Detectives found his vehicle later that day in Gainesville, Florida.
And just before 3 a.m. on Thursday, the scumbag was pulled over by an Alachua County Sheriff’s Office deputy and taken into custody. He was then transported to the Alachua County Jail, where he was tied to a chair so that the deputies could play Whack-A-Mole on his head with their night sticks for a few hours.

Okay, parts of that report may have been ummm  embellished a little.  But I know y’all would have wanted it to end that way.

Dangerous street takeovers are happening more and more often in Oklahoma City and across the nation, which is why an updated city ordinance is cracking down on large groups of people who illegally block intersections, roads, or parking lots. Street takeovers can include street racing, or can simply involve participants using their vehicles to block intersections while they take over the area with friends.

Not only do illegal takeovers increase crime, they also block medical responders during emergencies.

The updated ordinance includes vehicles being impounded for 90 days, while participants can be jailed for 60 days, as well as face fines of more than $2,000.

My only suggestion is that the towed cars are taken not to impound lots, but straight to scrapyards where the car crushers are waiting.  To paraphrase Samuel Johnson:  nothing concentrates the mind more than an imminent crushing.

And the fine takes away the deposit for a replacement.

Then we have this lovely little tale:

A 15-year-old boy has been locked up for 15 years for murdering a father of three who was stabbed to death on his doorstep after confronting a gang who verbally abused his daughter.

The teenage killer, who cannot be named for legal reasons, was ‘out of control’ when he murdered stonemason Jamie Markham, 45, after spending days shouting and swearing outside the victim’s home in Chingford.

He had been caught in school with a knife when he was 12 and Mr Markham believed the boy, then 14, and his friends had broken into the shed at the back of his flat in Old Church Road, where he kept his tools.

His killer was well known as a trouble-maker and had wrecked the local branch of Morrisons by hurling red wine and eggs down the aisles.  He was caught on video spitting in his mother’s face and breached a criminal behaviour order five times by being in the area where he killed Mr Markham.  He has appeared in court 12 times and been convicted for 22 different offences since June 2020, when he was 13.  His previous convictions include battery, criminal damage, using threatening, abusive words and behaviour, sending threatening messages and theft.

I have a simple solution for this kind of thing.

The evil little shit should be hanged in public (not hidden away in some prison), and the gallows should be set up right in the area where he and his little friends terrorized the residents.  The body should be left dangling for a week.

That would take care of his worthless ass, and it might make his gangster buddies think twice about perpetrating similar shit in future.  (And if it doesn’t, repeat the process until they all get the message, or they’re all dead.  Either outcome is acceptable.)

None of that will happen, of course, so the Reign of Terror will continue.

Several people have sent me this little snippet (in which, by the way, we can play our “Guess The Race” game):

Videos posted to social media show a mob of young Black men, teens and children violently attacking a Hooters restaurant in Plano, Texas on Thursday, according to posters of the videos. Customers and staff were attacked at the entrance and windows were smashed. A woman inside the Hooters can be heard off camera exclaiming, “It’s over a f***ing chocolate bar!”

The videos show what appears to be staff retreating to the entrance from a dispute outside in the parking lot that turned violent. The staff is attacked in the vestibule, with one male staff member assuming the BLM kneeling position to no avail. [well duh — Kim]

For those who are going “Huh?” at this happening in Plano of all places, I should point out that like so many otherwise-idyllic places, Plano has its dark side [lol], which is a couple square miles straddling the Central Expressway (U.S. 75) and is home to all sorts of evil scum and wretched villainy.

To we residents of the ummmm tonier side of Plano, the Third World begins east of Alma Drive. Here’s a map, with the Hooters location marked towards the south end: 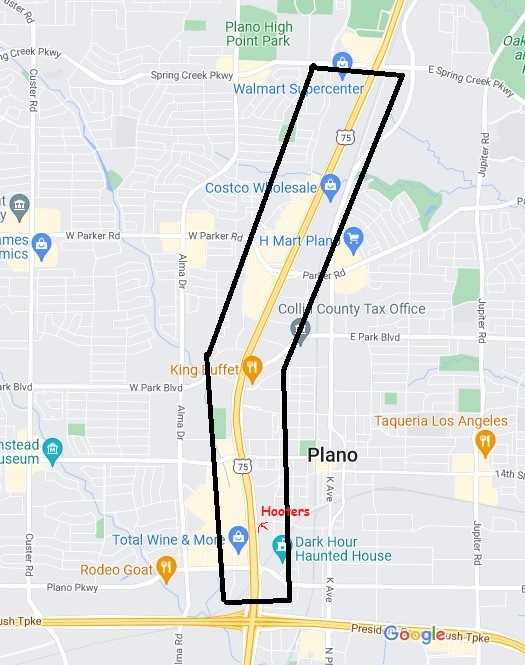 What’s interesting is that literally a parking lot away from Hooters is a redneck restaurant called Love And War In Texas, which features live country music and exotic meats on its menu.  Had this little “chocolate war” threatened this restaurant, there would have been gunplay, from both customers and staff.

My place is way off the map to the west, by the way, closer to the “corporate executive” part of Plano.

Anyway, there is a bright side to this little tragedy.  As Jim notes:

Fortunately, the Hooters calendar models event was held a few days before.

Given that this event typically features an audience of 90% truckers and rednecks (some overlap), it was fortunate indeed.  For the youths. 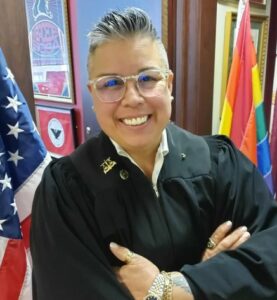