So having taken care of my carry gun problem, I turn now to the Boomershoot 2023 ULD situation.  Unfortunately, this leads me to another fork in the road.

But first, let me take care of the easy stuff.

Rifle type (bench vs. hunting):  Almost everyone said they had the “hunting” thing taken care of.  What they wanted was a bench-type rifle.  Check.

Readers who recall my experiences with the Howa HCR 1500 from last year may recall that I loved the rifle.  (Cliff Notes:  more accurate than anyone (let alone I) could shoot it, outstanding trigger — just about the perfect rifle at that price point, or indeed at almost any price point.)

So just for the hell of it, I looked at doing the Howa again, and found this situation:

And here’s where the problem comes in.  The two rifles pictures have the same silky bolt action, the same astounding trigger, and the same hammer-forged heavy barrel — in other words, mechanically they are identical.

Where they differ, of course, is in the stock setup — the Hogue is free-floated but not “chassis” based, whereas the Oryx is a true bench rifle.  (As pictured, the Hogue weighs in at about 8lbs, whereas the Oryx weighs just over 10lbs — the latter being irrelevant as it’s being fired from a bench, and heavier weight is actually a positive attribute.)

That $270 price difference, however, sticks in my craw.  (Oh, and the Hogue is available immediately, but the Oryx is on backorder at five different outlets, where I’ve put myself on a notification list, just in case.)

What say you, O My Readers?

Reader (and previous winner) Topcat hasn’t let his disqualification from this year’s drawing get in his way, oh no. His email to me two days ago read:

Best of both worlds?

I have to say that I like the look of the thing(s): 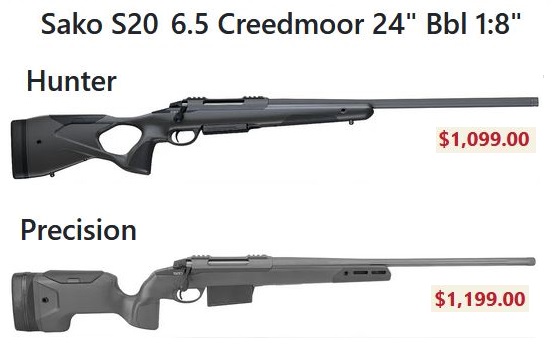 Essentially, it’s the same rifle — the Precision is a pound or so heavier because of the adjustable cheekpiece, and I think the larger magazine — which no doubt accounts for the extra C-note in the price thereof. Other than that: same barrel, same adjustable trigger, same bolt action; we may actually have a winner. (I can also do the same for the Hunter/Precision combo in .308 Win, depending on Reader preference: I myself have no favorites, but the .308 costs a couple hundred more than the 6.5 Creed.)

However: unless there’s somewhat greater interest in any rifle, this may be the Boomershoot 2025 drawing, because to date I think I’ve received but a few entries for the draw, totaling some $400 in ticket sales. 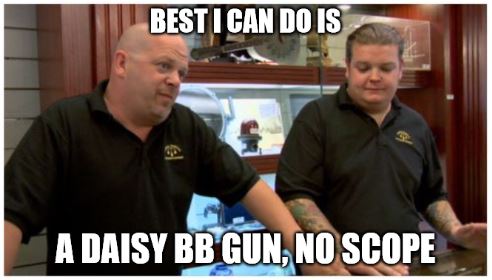 …worse still, I’ll have to hitch-hike up to Idaho, and nobody wants to see that.

So get onto it, folks, and send those entries in: $20 per ticket, up to five tickets per person. Zelle to kim-at-kimdutoitdotcom, or paper checks/money orders to the Sooper-Seekrit mailing address.

In drawings past, I’ve bought the rifle and scope ahead of time and waited for the ticket sales to catch up. Thanks to Bidenflation (LGB!!), that’s no longer an option. [200 ranty swear words deleted]

Thank you for your support.

In the Comments on the 2023 Boomershoot gear, Reader Beaner49 says:

“A scope with a BDC is a good choice rather than a simple crosshair.”

I will call mea culpa on myself on this one.

I am so accustomed to using a crosshair sight that I seldom look at any other kind;  but Beaner makes a very good point, and I may be selling the scope part of the ULD rifle short.  We’re talking about this: 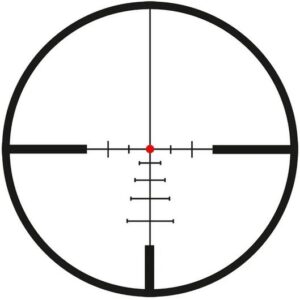 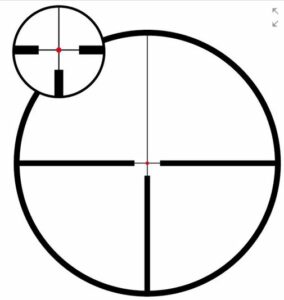 I have to say that I’m in agreement — never let it be said that I’m so stuck in my ways that I can’t make a change (although by and large, it’s a safe assumption — except when this kind of reasoning comes into play).

It costs a couple hundred more than my original choice, but Let’s Go Brandon.  Before anyone asks, the larger and pricier 56mm scope can be a POS to fit onto a rifle for not much more utility — but I’ll be ruled by the consensus of shooters more knowledgeable than I.  (Scary, this new Kim, innit?)

Yes, it’s time for all good men who seek a fine gun to step up and open their wallets:  I hereby announce the opening of the Boomershoot Rifle Boondoggle.

I tossed out PayPal earlier for their wokist, gun-hating reporting policies, so this year you will need to send either paper checks/money orders to the Sooper-Seekrit address, or through Zelle via my email addy (kim-at-kimdutoit-dot-com).  Sorry, but there it is;  I refused to be party to PayPal’s bullshit, and I hope you understand my position.

Tickets are $20 each, and you may buy up to five ($100 total) per person.  If you send more than $100, I will allocate you five tickets, and use the rest to defray my travel expenses from Texas to Orofino ID.

Now onto something much more important and interesting.

What kind of rifle do you, O My Readers, want the chance of winning:  a heavy-barreled long distance rifle (ULD) as in the past, or a premium hunting rifle, both topped with a quality scope?  If you plan on doing (say) competitive long-distance shooting or long-range hunting, then obviously you’d prefer to own something like last year’s rifle: 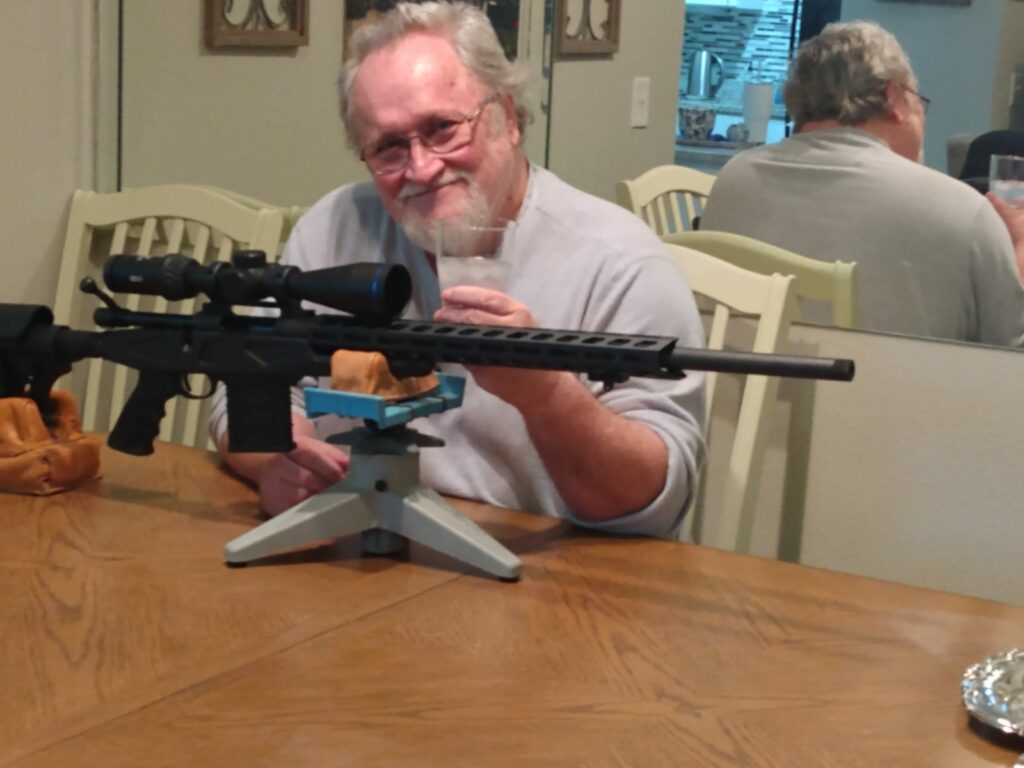 …whereas if you’re looking for a do-it-all premium hunting rifle that will do its job with confidence out to (say) 500 yards, there’s something like this one to consider: 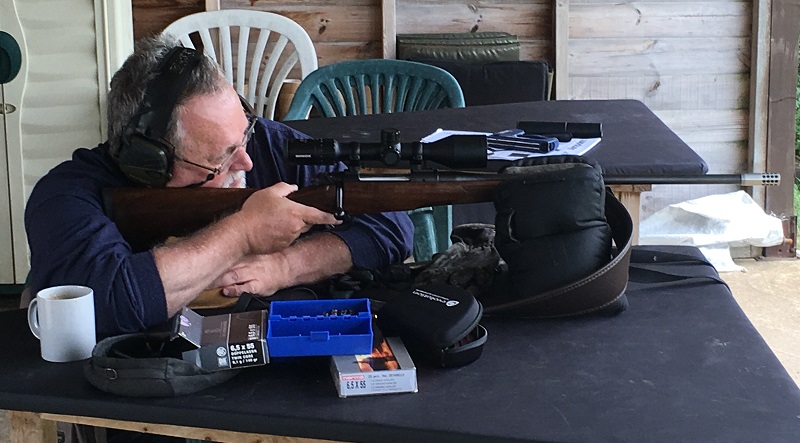 Email (NOT in Comments) your preference (ULD vs. PHR) with “Rifle Choice” in the Subject line so I can do a proper tally and make the decision.  In the event of a tie, I’ll toss a coin or make an executive decision.

Here are my thoughts, to help you make up your mind.  Remember that the more money I get in, the better-quality rifle/scope you’ll get.

ULD:  I absolutely loved the Howa from last year.  The trigger was exceptional, the accuracy WAY better than I could shoot it, and my niggle with the cheekpiece adjustment, I was assured by the manufacturer, was a one-off issue.  Here’s the HCR APC:

That said, I’d also look at the Bergara B-14 and the Ruger American Hunter (again):

All three are superb rifles, and sub-MOA results are all but guaranteed.

ULD Caliber:  in your email to me, if you pick this rifle, tell me your preference between the 6.5 Creedmoor and the .308 Win.

Now for the new category.

Everyone has their favorite hunting rifle brand and type, so I’m going to go outside the box on this one.  Firstly, as it’s a do-it-all rifle, I’m going with only one chambering:  .30-06 Springfield  (unless everyone shouts me down).  I want a cartridge that does the job (any job), AND is readily available at Bubba’s Bait & Ammo everywhere in the U.S.A.  And the choices, as you will see below, are not the typical ones…

…yes, a Mauser for under a grand.  (They also come with some funky-ass camo stocks.  I make no guarantees…)

All three of the above would make any hunt a good one (as long as the hunter does his job).

Whichever rifle is finally selected (ULD or PHR), I’m going with the Meopta Optika6 3-18x50mm FFP, because I honestly don’t think that you can get anything better without spending a boatload more money (Swarovski, Steiner, Kahles coff coff).

So there you have it.

Email me with preferences, thoughts and/or abuse.  All input (except the last) will be welcome.  Please get going, as there may be availability issues and I don’t want to grapple with those.

Looks as though I’m going to have to learn how to shoot the 6.5 Creedmoor, based on the majority of comments… [grumble, grumble]

Okay, time to look at the rifles.  All cost in the region of $850 – $1,700 except where noted, and the prices are approximate street (ATOW), not MSRP.  There are two categories:  those with 20″ barrels, and those with 24-26″ barrels.  The pics are not to scale, obviously.  Let’s start with the longer-barreled rifles:

My affection for this rifle is based on its performance at BoomerShoot 2022.  The 24″ barrel isn’t heavy, but the extra inches will add, I think, a lot more accuracy at distance.  And the trigger is excellent, as good as any I’ve ever fired on a rifle.

I like the Savage 110 line, and this one comes with a 26″ barrel and the excellent Accu-Trigger.  I have to say that Savage’s legacy in long-distance shooting does count.

I’d have no problems at all shooting this Browning (which also has a 26″ barrel), and it has a track record of being wonderfully accurate at pretty much any distance.  All X-Bolt rifles, both the ones I’ve shot and those belonging to friends, have good triggers.

Yeah, it’s a Sako.  Finnish precision in a gorgeous-looking rifle, and a 24″ barrel.

Now for the heavy-barreled 20″ rifles.

I’ve never fired a Bergara before, but it comes highly recommended by several people known to me, whose opinions I respect.  I hate the vomit-colored stock, of course, but then again it’s not my rifle.

I like this rifle a lot, and the muzzle brake — while somewhat antisocial on the line — attenuates the recoil considerably.  The trigger is adjustable down to 2oz (!) but I’ll probably stop at 4-5oz, if I adjust it at all.

I haven’t fired this particular rifle at all, but I’ve fired several Tikkas before, and been impressed with all of them.  I’m expecting this one’s trigger to be at least as good, or better than those, so it’s not that much of a leap into the unknown.

The above are the rifles on the shortlist, so far.

Well, CZ have stopped making the excellent 557 Varmint line, and replaced it with the new 600.  Except that all the 600s are under a factory recall, which puts a wrinkle in my thingy.

I don’t mind the looks of this rifle, and at least it has a wooden (albeit laminate) stock.  This will make it heavier than the others, but weight in a bench rifle is a Good Thing.  A negative for me is that it’s not being offered with a set trigger, which was always a strong point of the CZ rifles.  If CZ can straighten out its recall issue(s) in time, I will certainly add this one to the list, though.

Regardless of the rifle chosen, I intend to mount the excellent Meopta Optika6 3-18×50 4C FFP ($800) because after having fired several other brands, I always seem to come back to this company’s offerings.

All comments on the rifle list are, of course, welcome;  but any one of them would be a good choice.

Now, because of the in-stock supply issues, I’m probably going to open the entries some time in the early fall so that I can guarantee having the rifle in hand for sighting-in by December 2023 at the latest (so that if I get a dud, I can return it and get something else). As always, the amount of money from ticket sales will determine the rifle/scope combination, with the balance going towards subsidizing my trip to BoomerShoot.  The ticket price will remain at $25 unless circumstances (Bidenflation coff coff ) change dramatically.

So watch this space…

Looking at ULD rifles for next year’s Boomershoot draw, I’ve narrowed it down (subject to availability) to about six or so.  But here’s my problem,

So, O My Readers:  which chambering would you be more likely to plump down cash for a ticket or two?