This article made me think:

THIS is the moment more than 30 conspiracy theorists descended on a Tesco store without masks in a “selfish” protest.
Dozens of people flouted Covid restrictions and brazenly went about their shopping trip in the store in Chelmsford, Essex.

Basically, a bunch of people got fed up with all the bullshit about the Chinkvirus, and in a wonderful gesture, said “Fuck you!” to authority and went shopping without their masks.

There are a couple of things to take away from this.  Despite the article’s blatant editorializing (calling them “conspiracy theorists” and calling what they did a “selfish protest”), this group of people could be  characterized by a couple of factors:

Despite the bluster, Brits are usually quite a subservient lot — even without the Chinese Plague, they are bossed around by officialdom and petty bureaucrats on a day-to-day basis to a degree that would amaze most Americans — and also quite law-abiding (the two are not the same).

So for this to erupt is going to be quite worrisome to a whole bunch of the little Stasi-wannabes.  And indeed, from the article:

The council and police are now working to find out how this maskless protest was able to happen.
…
“Organising a maskless shopping trip is not big, not clever but it is illegal.”

And a little editorializing and scolding from the article’s author:

Customers are required by law to wear masks inside all shops, unless they are exempt for medical reasons.
…
And social distancing must be enforced unless you are from the same household or bubble.

Well, Our Heroines didn’t actually care about the government’s fucking little “bubbles”, did they?

Here’s why this little activity got me thinking.

In his excellent article American Exodus, Angelo Codevilla makes a telling point (and read the whole damn thing).  He says this about the stranglehold that today’s oligarchy (politicians, Press, corporations and technology companies) have over our society Over Here:

The federal government, the governments of states and localities run by the Democratic Party, along with the major corporations, the educational establishment, and the news media set strict but movable boundaries about what they may or may not say—on pain of being cast out, isolated from society’s mainstream. Using an ever-shifting variety of urgent excuses, which range from the coronavirus, to the threat of domestic terrorism, to catastrophic climate change, to the evils of racism, they issue edicts that they enforce through anti-democratic means—from social pressure and threats, to corporate censorship of digital platforms, to bureaucratic fiat. Nobody voted for this.

Then he offers up this little nugget:

Some sort of mostly peaceful exodus is within our powers to achieve.
…
We can withdraw our compliance, go our own way, and build anew.

Our American exodus won’t be led by a Moses. The Republican Party, with the exception of a few national-level personages, may be as useless as ever. But politics is a collective activity, and the lack of top-down leadership notwithstanding, our exodus is already in progress, thanks to Americans’ legal structures and traditions of state and local autonomy, as well as our Tocquevillian taste for organizing ourselves into ad hoc groups for the common benefit.
…
Ordinary citizens who are oppressed by COVID-inspired overregulation have also organized themselves to take advantage of the fact that safety in numbers is the first rule of civil disobedience. Thus, hundreds of California restauranteurs jointly defied the governor’s order to keep them closed, and sued him. Joint action is also the key to transforming what the authorities want to treat as disciplinary or criminal matters into political ones.

That is why going one’s own way, while paying no more attention to the woke than is absolutely necessary, should be the agenda of the country party, which in this case includes all of those who still feel an attachment to the ideals of republican citizenship that we once shared in common as Americans.

And returning to those doughty British women once more:  there were only thirty.  No doubt, the Filth will be going after them, aided no doubt by the many little Quislings that exist in today’s tattle-tale culture.

Now imagine if there weren’t thirty, but three thousand, spread across every store in town?  Think the cops would be able to go after all of them?  Here’s the kind of job facing the Brit authorities elsewhere in the country.

Codevilla calls it the American Exodus:  the severing of ties by ordinary people like us with the foul bureaucrats, technocrats and their Leftist sympathizers in all the institutions.

Many weeks ago, I talked about my refusal to use Google products as much as is possible (Chrome, Google search, and so on), having no Twitter or Facebook accounts, and my absolute refusal to have anything to do with anti-2A corporations like Levi Strauss — to name but a few.  I make no claim to be a groundbreaker in all this, of course — in fact, I admit to being something of a latecomer to the party — but this is something we need to do en masse from now on.

Withdraw from those societal institutions which are part of this totalitarianism.

Become homeschoolers if you have small kids, or offer to homeschool your grandchildren because the poison that is being dripped into their ears every day not just by state schools but lamentably even by some private schools is the poison that will infect future generations of Americans.  And if you can’t do that, confront your schools and demand that they stop teaching children monstrosities like “critical race theory” (anti-White racism is what it is, and what you should call it).  And by all means enlist your state legislators to your cause (as Ohio did).

We have to do something, anything;  and even though what we each do may seem small and insignificant, those little grains of sand may turn into a landslide, if we all get involved.

And don’t forget to teach your children and grandchildren how to shoot.  In times to come, it may be as important as knowing how to read and write.

Continuing our series of stuff that makes you scratch your head, we come upon the following:

Feel free to add your pet designing peeves, in Comments.

So this, apparently, is Britain’s roadmap to reality as they emerge from the horrors of Teh Chinkvirus: 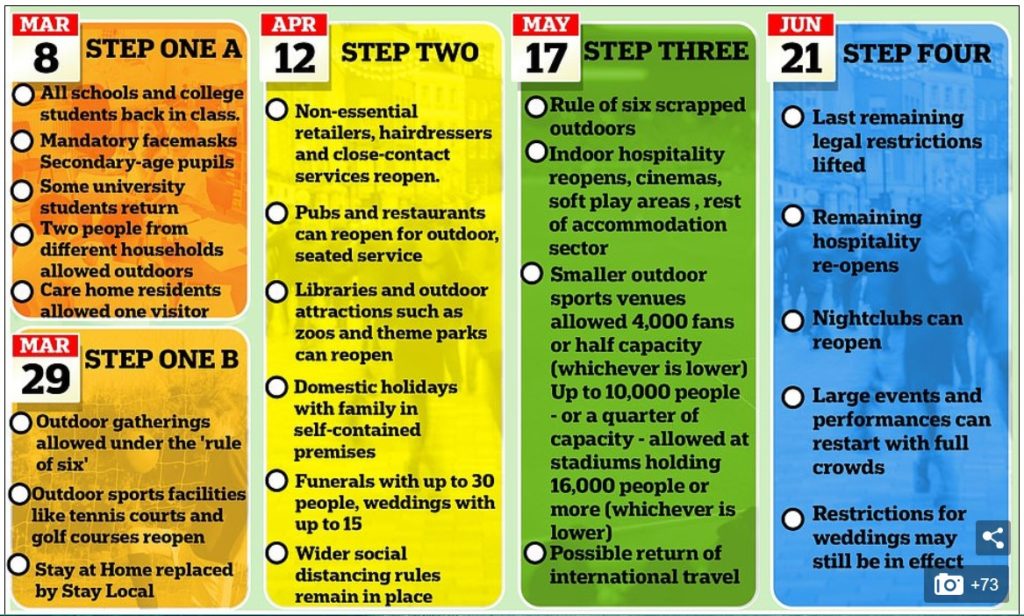 To me, all this simply spells

…and about a dozen different ways* for the Filth to harass and / or arrest people.  But I could be wrong.

Also note that in the Blue panel, football matches (20,000-plus crowds) are A-okay, but apparently weddings are “super-spreader events” because they’re still limited to 15 guests only.

Note that commonsense would allow some leniency in terms of the numbers — but it doesn’t have to, because in the main the Filth are a bunch of rule-bound control freaks themselves, and because they can do fuck-all about Britain’s actual crime (muggings, stabbings, robberies etc.);  but by God let some granny have one too many guests at her late husband’s funeral, and it’s to jail she’ll be going.

Here’s a lovely article from American Thinker.  A sample:

Early on President Trump relayed the good news that a cocktail of Hydroxychloroquine, zinc, and Azithromycin showed great promise when given to newly infected patients.
An avalanche of political attacks immediately followed.  A myth, preached by Dr. Anthony Fauci, said the cocktail had no effect on the viral infection, that it actually was dangerous.  The FDA warned against using the long proven safe drug Hydroxychloroquine.  The respected medical journal, The Lancet, published (and later retracted) an article against its use.  No debate was allowed.  “Medical Science” proclaimed that the cocktail was useless.  Authoritarian State Governments banned its use.
Doctors on the frontlines knew otherwise.  My doctor specializes in infectious medicine.  All nearby doctors go to him when they get sick.  From the beginning of the epidemic he worked literally day and night to save lives.  Sometimes he failed.  Most times he succeeded.
I asked him if he used the Hydroxychloroquine cocktail and if it really worked.  He did, and it did.  He then surprised me when he used unexpectedly strong language to castigate Fauci and all those who had politicized the epidemic.

The rest of the piece is equally fine.

I will probably, funds permitting, get a mug to include with the winning ULD ticket.  (Have you got YOUR ticket yet?)

I’ve mentioned this bad boy in the past as a worthwhile addition to a SHTF bag:

Walmart has the Estwing version — all-metal, for half a dozen bucks more.

Both are made in the U.S., so that’s all good.  My only word of advice is that you may want to touch up the axe blade of each one a tad, as I did mine (I have two in my SHTF bag) — they’re rigger’s hatchets, not woodsman’s.