The world faces a monkeypox pandemic — said pandemic having originated not in Wuhan this time, but in Africa, the traditional ground zero for most shitty modern-day plagues and illnesses — such as HIV/AIDS.

But wait! there’s more!  Let’s look at the breadcrumbs:

The U.K.´s Health Security Agency said Monday there were now 470 cases of monkeypox across the country, with the vast majority in gay or bisexual men.  According to U.K. data, 99% of the cases so far have been in men and most are in London.

American man, 48, vacationing at a Mexican resort for gay men fled a Puerto Vallarta hospital after being told that he might have monkeypox: He flew to Texas where he tested positive for the highly infectious virus

Of course (just as with AIDS), there’s the obligatory warning for heterosexuals:

Scientists warn that anyone, regardless of sexual orientation, is susceptible to catching monkeypox if they are in close, physical contact with an infected person or their clothing or bed sheets.

…which is true, of course, but unless you’ve been sleeping in some fegelah‘s unwashed sheets or snogging his boyfriend, your chances of catching this latest little present from Africa seem to be remote.

And of course, the CDC is ever ready to play its part in this maskirovka, putting out a pamphlet like this one, which depicts (surprise!) a hetero couple and not someone from Greenwich Village. 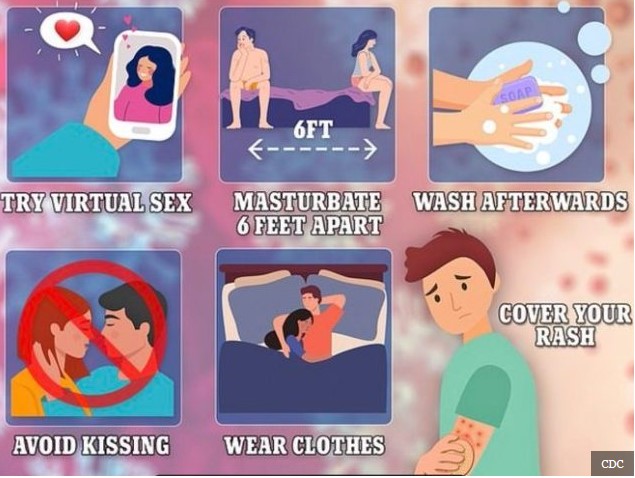 Even our old ‘Rona friend, the oh-so scientific (not) “6 feet apart” rule, has made a comeback.

What a load of crock.  Needless to say, the Covidocrats are just itching [sic]  for some new pretense to lock us all down again, but it ain’t gonna work this time.