Before I start, please note that I don’t normally post pieces of this type over the weekend, but this is going to be a long one and is therefore best posted on a non-workday. Get yourselves a fresh cup of joe or your Morning Margerita and some snack food before going any further.

The need for emergency supplies, or rather, the media’s interest therein, seems to be a cyclical thing. The Red Cross has just published a list which is okay, I guess, but it’s woefully incomplete. I’ll address its shortcomings further down.

I’m not one of the “seasoned” preppers by any means. But I have made, and continue to make, various kinds of contingency plans for myself and, if possible, for my family. So here’s my take on the whole thing.

Before you start any kind of emergency / disaster preparation, understand that you’ll need to make two kinds of preparation in answer to the eternal questions concerning looming disaster: do I hunker down, or do I bug out? Each requires not only a different set of preparations, but also a different mindset. Frankly, unless your town is being evacuated, you’re better off staying in place. And if you are getting the hell out, do not go to a marshalling point with your carefully-packed supplies, because the first thing the law enforcement stooges will do is take all your stuff and stick it in the communal pot — which means you’ll be supporting the grasshoppers.

Just remember that if you’re going to join up at someone else’s house — highly recommended because it makes the place easier to defend — just make sure that you arrive properly armed and provisioned, or else your buddy running the sanctuary is going to turn you away (or he should, anyway). Do not be the guy who has to rely on the good graces of others: four or five self-sufficient extra people can defend a house and its contents with ease, but four or five hungry mouths just means that everyone’s going to go hungry sooner. And don’t get angry or butt-hurt when your buddy turns you away if all you’re bringing is your empty hands: you’re the one who’s unprepared, not he. This is all the more critical if you’re bringing small kids to the party: look after them yourself, because otherwise they’re just a burden on everyone else.

I can’t believe I even have to say all this, but I suspect that most people have made no plans either because they’re stupid and negligent, or they think “it can’t happen here”, or else they expect “the government” to look after them. We are not Europeans, people: we’re Americans and we take care of ourselves.

Hunkering down. This means that you’re not going to leave the house because the situation out there is too volatile. Complete social breakdown means that you’d likely be vulnerable outside your house unless you’re part of a group which can handle any kind of mutual self-defense requirement. So you decide to stay at home and create a fortified position. This is generally the case too when there’s a local issue such as a prolonged power outage, or nearby locations have been flooded, leaving you isolated. (Obviously, if we’re talking potential damage such as wrought by a tropical storm in Florida, the East Coast or the Gulf Coast, then it’s time to bug out.)
I would even say that in 90% of occasions other than the above, you’d be better off staying put. The reason is simple: you can keep more survival items in a house than in a car. Also, you can keep larger / heavier items simply because you don’t have to lug them around.

It sounds all daring and romantic to hit the trail and be independent and stuff, but anyone who’s ever been on a full-pack route march will quickly disabuse you of your illusions. And a car / SUV / EOTWAWKI vehicle is all very well, right up until you run out of gas because you were stuck in a fifty-mile line of barely-moving cars on the interstate.

So let’s look at what you need in a hunker-down situation.

Backup power. This could mean as little as spare batteries for all your survival appliances like phones and flashlights, through a power inverter than can be run by your car and keep your fridge running, all the way up to a large backup power unit which will keep your large items usable (e.g. fridge, deep freeze, ovens, microwaves and of course, laptops).

Food should not be a problem if you have a decent quantity of shelf-stable groceries in your pantry — and if you don’t have these, then you should get some. This would include canned goods, dry goods (sugar, flour, salt etc.) as well as protein bars and such. (By the way, forget making bread au naturel; it seldom works and usually tastes like crap. Stick to rice and porridges like oatmeal or grits (see below).

Water is of course a necessity, and you need lots, at least a gallon a day just for drinking alone — although if you have a swimming pool or even a large hot tub, you’ll be okay for water for some time. (Yeah, chlorinated water tastes like crap but you won’t die of thirst.) And if you get one of those water purifying thingies, you’ll have fourteen to twenty thousand gallons of potable water on hand. With a couple of cheap plastic paint buckets, you’ll even be able to flush your toilet with the pool water.

You’ll need to cook stuff. You can do it the hard way or the easy way. The hard way means cutting wood and making fires — not easy in the suburbs when firewood is at a premium, and impossible in any large city. The easy way is a Weber grill with two propane cylinders. I keep one full and use the other until it runs out; then I hook up the full one and get a refill immediately. (Some people rotate three cylinders in this manner, and I’ll never argue with them about it.) If you’re careful and husband your gas, you’d have about six to eights weeks’ cooking with that supply. I also have on hand a couple of single-burner Coleman-type camp stoves (with a zillion butane gas cylinders), which worked fine the last time we had a serious power outage. They are remarkably frugal — you can heat up a can of coffee and food twice per day (i.e. warming up a can in a pot of water), and doing just that, one of those gas cylinders will last you 4-5 days. (Pro tip: most Asian markets sell cheap copies of the Coleman stove that last forever — mine are at least a decade old and are still running strong — and the cylinders cost about a buck each, much cheaper than the branded butane sold by camping stores.)

Lighting. If the mains power is out, you have to have light because apart from any actual need (e.g. for reading), light stops you from getting depressed at night. I have a couple of DD battery-powered mini-florescent lanterns, which likewise worked just fine. 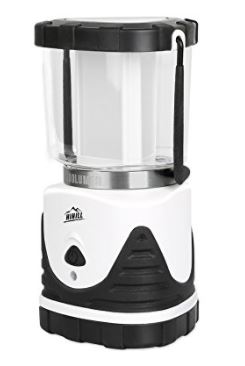 And of course, you’re gonna need a few flashlights, such as the SureFire (for personal defense) and the venerable Maglite 3D. What I like about these two old warhorses is that modern xenon bulb technology has changed them both beyond words and given them new life.

First aid / medications: get as comprehensive a kit as you can afford, and supplement according to your own assessment and needs. Most important are your medications, if you’re taking any. It’s no good having lots of Tylenol when what you need is Diovan for your blood pressure. I know that insurance companies only pay for about a month’s worth of medications at a time — we all know why — but if your life depends on your meds, get your doctor to write you a prescription for three months’ supply, then bite the bullet and pay cash for them. All the prep in the world isn’t going to be worth much when you keel over from a preventable heart attack. Once you have the extra meds, start using them and top up the stash with your “fresh” monthly Rx so the drugs stay effective. I have at least 90 days’ worth each of Diovan (for high BP) and Allopurinol (gout), as well as stuff like low-dose aspirin 87mg (heart) and the (exceedingly few) supplementary vitamins I take. Also, if you’re of that age, don’t forget your contraceptives. Danger causes the libido to rocket, folks, and it’s also a good way to keep warm.

Weaponry: you’ll need to protect all this stuff from people who aren’t as prepared as you, so I don’t think I need to talk too much about this one. Suffice it to say that you should have at minimum one each of the following, and make sure every adult in the house can use all of them:

Pump-action shotgun — I prefer 20ga, but 12ga seems to be the most popular. Just remember that a shotgun is fine, but they don’t hold much ammo and reloading is a bitch.

Handgun — any semi-auto; mine is of course the Colt 1911-style, but if you can shoot the eyes out of a gnat with a Glock 9mm, then go ahead [sigh]. Generally speaking, a semi-auto is more effective if you’re going to be involved in a prolonged shooting, but honestly, I won’t argue with anyone who prefers to use their S&W 686 (as long as you stock up with speedloaders and practice using them). Actually, choice of ammo is more important than the gun: make sure you’re loaded with hollowpoints, whatever the caliber or handgun type.

Rimfire rifle / handgun — for all those times when you don’t need a large caliber.

And it goes without saying that you should have plentiful ammo  — at least 200 rounds each per gun, not just per type. (Rimfire ammo should be in much, much greater quantities — in the thousands or even tens of thousands — because if nothing else, it’s good barter material, as is liquor.)

Now let me address the contents of the Red Cross’s list, because that seems to be an attempt to get people ready to bug out. You will need to carry sufficient supplies for three days, and preferably five. And if you have small kids, forget about hiking: you’ll need a car.

What the Red Cross missed:

I’ve written way too much, and I’ve only scratched the surface. I only hope I’ve got people to think about this a little, if they haven’t already. Just remember: like most stuff of this nature, you never need it until you need it — but then you’ll need it really badly.

For a more comprehensive treatment of the topic, go to Bill Quick’s SHTF place. In the meantime, let’s not get carried away, shall we? 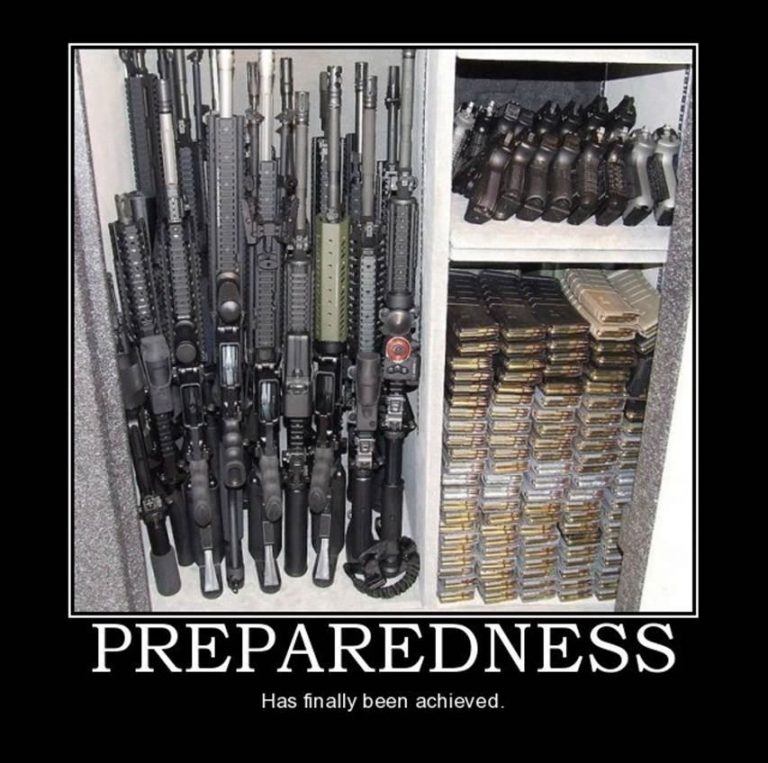 Little light on foodstuffs would be my only criticism, but otherwise, not a bad start.