In a world which is becoming more and more “convenient” (i.e. controlled by electronics and algorithms), I have to say that in the automotive world, it’s the Germans who (unsurprisingly) lead the charge.

Read this Road & Track article about the Porsche Cayenne SUV, and see if you can spot the parts which made my trigger-finger itch and led me to look up “home-made explosives” on the Internet.  No, don’t bother;  here they are:

When we ordered our Cayenne, we thought the $940 stand-alone option price was a bit excessive. Our opinion on the cost has not changed, and while we have only just gotten used to pulling the key out to unlock the car, then returning said key to our pocket before starting the car—you don’t need to insert the key to start the car—we do find it a bit annoying to have one but not the other, considering our Cayenne is $80K. Staff editor Eric Stafford captured it perfectly in the logbook: “This first-world problem is a first-world pain in the ass.”
Driving at night on back roads has brought to light (sorry) the inability to dim the instrument cluster sufficiently. On a dark road, the interior lights glare into our eyes. Not only that, dimming the lights requires you to go through a menu in the infotainment system, and there are three separate dimmer controls for the instrument cluster, clock on the dash, and center touchscreen. Remember dimmer knobs? Porsche says forget them; doing it through an infotainment menu that can’t be adjusted while moving is a much better solution. This is a prime example of technology taking a simple task and making it unnecessarily complicated.

I have already voiced my loathing for keyless access/ignition systems, so I won’t go into it here.  Not having an analog dimmer switch for the interior gauge lighting is so fucking stupid as to defy definition.  (My late father always used to say, when some or other non-essential doodad on his Mercedes 350 SE failed, “No wonder they lost the fucking war!”)

I am going out on a not-so-long limb here, and offer 10-1 odds that among the performance car manufacturers, Porsche will be the first to offer / mandate driverless (a.k.a. self-driving) cars, most likely in their SUVs first, and then the venerable 911 line soon thereafter.   (It was bad enough that they took the manual gearbox out of the 911 line altogether — because no driver can shift gears quicker than their phantastiches  PDK —  and more nonsense like that is bound to follow.)

I am not, and probably will never be in the market for a new Porsche of any description, so they can safely ignore my bitching.  (Honorable mention:  the Porsche Cayman, which has a stick shift and is routinely described as one of the best sports cars — in its original sense — on the market.) 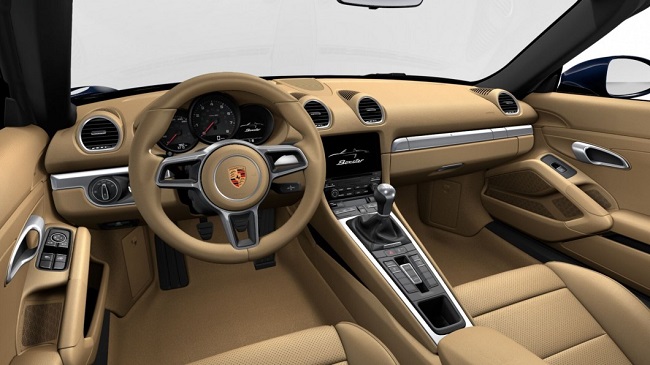 And even that interior is a little too gadgety for Your Humble Narrator.

But it’s not just Porsche;  I am going to eschew any  model car whose manufacturer deigns to make driving decisions on my behalf.

When I talk tongue-in-cheek about wanting a basic car like the Mini-Moke or Toyota FJ40, I don’t really mean it because even I have  my limits.  Not all  innovation sucks, in other words;  but I would suggest that “Remember dimmer knobs? Porsche says forget them; doing it through an infotainment menu that can’t be adjusted while moving is a much better solution”  should require daily floggings for the engineers who suggested this and the managers who signed off on it.

And if for some insane reason I did  want a non-Boxster Porsche, it would be this one: 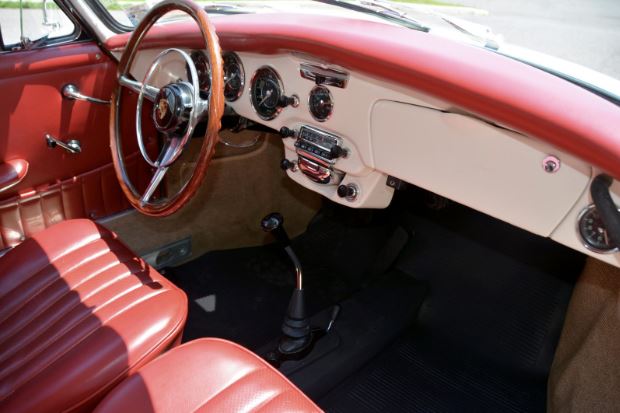 Yup, the 356c pushes all my sports-car buttons, Porscherly-speaking.  Now  we’re talking driving pleasure, my friends — and yes, I’ve been behind the wheel of a 356 before, and it was a fantastic experience.