I see that the Gummint is showing signs of panic:

Law enforcement agencies across the National Capital Region are aware of plans for a series of truck convoys arriving in Washington, DC, around the time of the State of the Union. As with any demonstration, the USCP will facilitate lawful First Amendment activity.

The USCP is closely coordinating with local, state, and federal law enforcement agencies, including DC’s Metropolitan Police Department, the United States Park Police, the United States Secret Service and other allied agencies to include the DC National Guard.

The United States Capitol Police and the United States Secret Service have been closely working together to plan for the upcoming State of the Union. The temporary inner-perimeter fence is part of those ongoing discussions and remains an option, however at this time no decision has been made.

Now, I’m no security expert or whatever, but I just don’t see those lil’ bitty fences as being exactly truck-proof, if you get my drift.  But as long as the gummint thugs don’t go all Ottawa on our protesters, everything will be fine.  And a special note to the po-po:  leave their pets alone. [/Pink Floyd]

However, let’s not forget that the Federal Bureau of Instigators will almost certainly get involved: 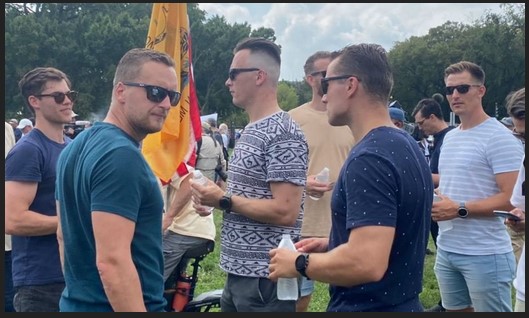 …although I’m pretty sure they won’t look like a Forrest Gump Cosplay Festival this time.

Now I’m not suggesting any kind of ugliness be directed at them, no sir not me.  What I am suggesting is that the truckers police their own protest, and if some asshole does start yelling about storming the Capitol or anything like that, kick the living shit out of him.

All for the sake of keeping the protest peaceful, you understand.