I remember the brouhaha when Insty suggested that motorists, when faced with rioters blocking roads, simply “Run. Them. Down.”

And what should We The People do, when violent rioters and activists start threatening our food supply?

Farms, abattoirs and factories have been subjected to vandalism, and owners and staff sent death threats during an alarming increase in incidents.
But a minority of vegan campaigners want the UK to become a meat-free society and are going to extreme lengths to achieve their goal.
The National Pig Association and the British Poultry Council are among the organisations being advised by specialist police.
Leading food writer William Sitwell recently described the vitriol he faced after making a flippant comment about vegans.
“There were threats to rape my wife, tie her up and cut off her genitals,” he told this newspaper.
According to an investigation by Channel 4 Dispatches, Jewish workers were branded Nazis when members of vegan group SAVE began protesting outside kosher Kedassia abattoir in East London two years ago.
Some broke in and daubed the walls of the abattoir with anti-Semitic slogans, according to the programme, and one protester yelled: ‘It’s a holocaust. You Nazis!’
SAVE admitted on Facebook it was responsible for daubing Holocaust images, initially suggesting the use of the term was justified, but it later apologised.

Big of them.  Over Here, I’m trying to think what I’d do if I was faced with this situation at Kroger: 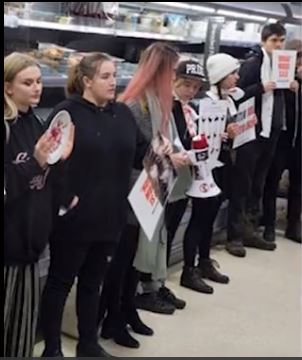 I’m thinking polite requests to let me through at first.  Then trying to force my through.  (This bunch of skinny malnourished twerps would not be able to offer much resistance, methinks.)

However, if they were to turn violent, or even threaten violence?  Maybe I’m over-imagining things, mind you, because I don’t see this nonsense getting much traction in the United States, and certainly not in Texas except (maybe) in Austin, where I’m willing to bet that the vegan infestation is six times that of anywhere else in the state.  And I don’t shop for food in Austin, ever.  (Hell, I hardly even visit  the place except when I’m visiting Longtime Friend Trevor.)

It strikes me that these fucking headcases are quick to threaten violence to get their own way.  Perhaps they need a quick lesson or two in real violence, just to keep them in their place in the social pecking order.

I’m not thinking of going to the guns, of course:  this situation doesn’t even come close to that course of action.  However, I do think I need to invest in a can or two of decent pepper spray.  Anyone have recommendations as to brands and / or strengths?