I’ve never been involved in the movie business at all, so I’m not really qualified to comment on this story (not that this has ever stopped me before):

Alexa Chung has revealed how she was once ordered to strip by a movie producer while being auditioned for a role. In a worrying #MeToo moment, the model was told to remove her clothes so that the exec could see what she looked like naked.
Addressing the Oxford Union, Alexa said: ‘He told me to strip because he needed to see what I looked like naked for a scene that required it.’

Okay, let’s all accept the fact that the whole casting thing could just turn into an opportunity for men to catch a free look at naked women.  (In other news, Gen. Custer seems to be having some difficulties with the Sioux.)  And yeah yeah, that’s just awful and terrible etc. etc.

I have some parallel thoughts, however:  if you are auditioning for a part where you’re going to be filmed in the nude, don’t be shocked when you’re asked to show what you look like naked.  If you’re Julia Roberts, for example, you can turn down such demands because you’re going to get a body double anyway — they’re casting the face, not your ironing-board body.  But if you’re a nobody, you can’t really turn it down because appearing or performing in the nude is one of the reasons you’re being cast at all and if we’re going to be blunt about it, if you have some blemish (e.g. saggy boobs or a large birthmark), the producer is not going to hire a body double for a nobody.

The other thought is that the director has to be sure that when he films a scene — any scene, let alone a nude one — he has to be sure that viewers concentrate on what he’s trying to show, not on the fact that Second Actress From The Left has one breast considerably larger than the other.

So while I can sympathize with this Alexa Chung (whoever she is) because of the voyeur thing, I can also see things from the other side of the desk, so to speak.  I should also point out that this woman is an ex-model, and didn’t seem to have too many qualms about being naked anyway: 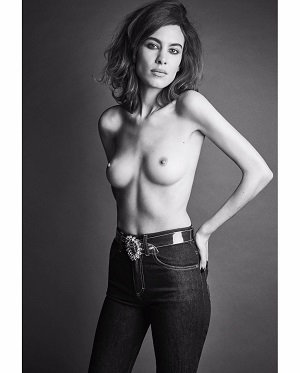 And here’s another thought:  a producer asking to see what you look like on the nude is not a Harvey Weinstein/#MeToo moment;  a producer wanting you to fuck him to get the part, is.

We can also talk about why nude modelling or nude scenes in movies are necessary at all, but that’s a topic for another post.