If ever you want to know why Britain’s leaving the EU (“Brexit”) is not only a Good Thing, but absolutely vital, here’s proof:

A change in European Union rules could see doner kebabs banned across the continent, infuriating takeaways and fast-food lovers.
The European Union’s legislature is moving to ban the phosphates used in the slabs of meat at the heart of the popular street snack that originated in Turkey.
Up-in-arms kebab vendors in Germany have skewered the idea.
EU lawmakers are citing health concerns based on studies that linked phosphates to cardiovascular disease.

Just so we’re all clear what’s being discussed here, this is what these tools want to ban: 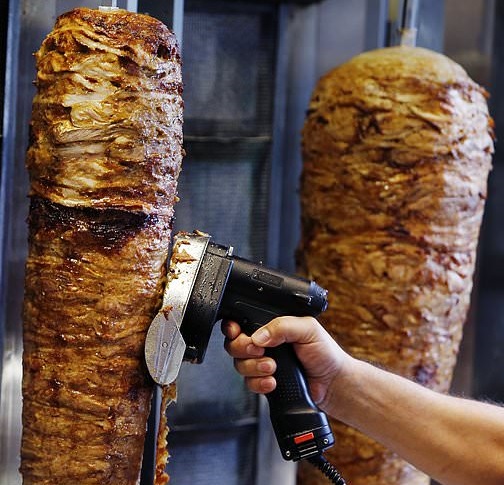 Lamb Shwarma happens to be one of my favorite “fast foods”; and nobody tell my kids about this or else there’ll be murders (as they say Over Here). Along with pizza and crêpes, doner was one of their staple street foods when we traveled together in Euroland: cheap, filling and delicious; and if these disappeared from Europe, it would be a major disincentive to go there. I’m not kidding.

And if the above pic has made yer mouth start to water, I’m sorry (not really).