One of my buddies owned a Ford Capri back in the early 1970s, and many’s the weekend night he and I would go out in the Capri looking for booze, women and trouble (some overlap).

This being South Africa, he had the European-styled version (which I preferred over the U.S. Mercury type anyway) with, as I recall, the 2.0-liter V6 German engine.  All I remember was that it was easily a match for any hot Mini-Cooper S, Alfa Romeo 1600 or Fiat 125 S of the era — at least, in Mike’s hands it was, and I remember most vividly the incredible speed with which he raced up and down through the gearbox, using that tiny short-throw stick.

I thought then (and still do) that the Capri’s shape was incredibly sexy — far more so than the earlier Mustang, and hugely more so than the horrible Pinto — and frankly, I think it would hold its own against the anonymous styling of many of today’s wind-tunnel models.  Sure, it’s a little dated, but then so am I.

The 2.0-liter V6 was fine for the times back then, but if I could have a new one today, I’d get the racier 3.0-liter GT or GXL, which put out close to 150hp — and considering how light the Capri’s body was, it would be plenty powerful:

I wouldn’t even mind the 70s-era upholstery color: 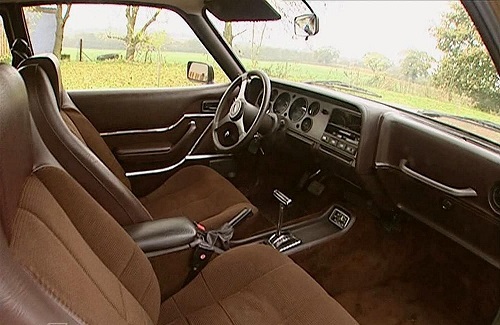 Side note:  there was a racing version of the South African Capri (called the “Perana”) which was fitted with a monster 5-liter V8 engine.  It was eventually banned from competition because it had no competition.  Vroom vroom.

A number of Americans dream of owning a muscle car from the 1960s and 70s.  If I had to own such a car (as opposed to, say, an Alfa Romeo Montreal), the Ford Capri would top my list.