This one will resonate especially with my Brit and Colonial Readers.

Trusts created by British chocolate maker Rowntree have apologised after research into its own history revealed ‘shameful’ links to the slave trade.
The investigation into the company’s history was party prompted by the Black Lives Matter movement and revealed evidence that the famously philanthropic family business may have profited from the slave trade.

But it gets worse:

Research by the Rowntree Society, which promotes the history of the company, also uncovered allegations of racial discrimination and anti-union tactics at the firm’s South African subsidiary Wilson Rowntree during the apartheid era as recently as the early 1980s.

O noes!  Not the Evil Boers!

Now I don’t wanna sound all uncaring and indifferent and stuff, but lest we forget, said horrors also enabled the following items of pure deliciousness to tickle our palates.

An aside:  alert Readers will note that many of the items below are labeled “Nestlé” because yea did Rowntree sell their chocolate business to the foul Swiss;  but thankfully, the cuckoo clockmakers have never used their own disgusting chocolate recipe, but stuck to the original Rowntree formulation (much like Hershey has done with Cadbury products Over Here).

Still one of the nicest chocolate bars ever made, the “bubbly” Aero is an automatic basket-filler when I go to World Market. 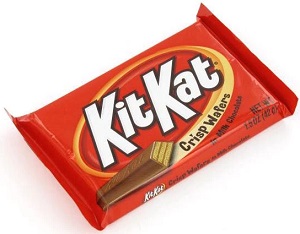 This is a staple in 7-11 and other convenience stores, and for good reason.  (The white-chocolate KitKat is even better.) 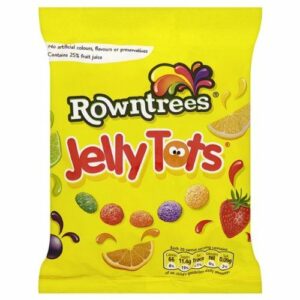 Beloved by small children (and by their parents, as bribe material), the tiny sugar-coated gelatin pellets are not only delicious, but addictive.  Not as addictive, however, as Rowntree’s 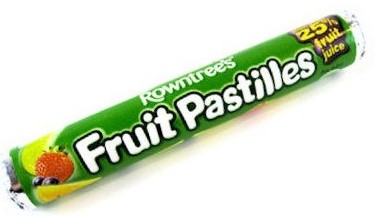 The Son&Heir is not a big candy consumer;  he doesn’t eat chocolate and hardly ever uses sugar with anything.  However, give him a tube (or large bag, it doesn’t seem to matter) of Fruit Pastilles when he comes a-calling, and the delicious things will have disappeared before he gets home. 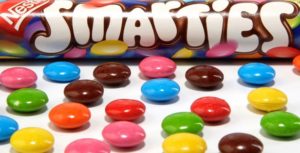 These chocolate-filled sugar candies are what M&Ms are supposed to taste like, but don’t.  Unlike said Hershey horribles, Smarties give you a choice in the eating thereof:  you can crunch them up in your mouth and chew the thin candy slivers with the chocolate, or you can do what I do:  suck them slowly until the candy disintegrates, then be left with warm, melted chocolate that will coat the inside of your mouth with absolute indulgent pleasure.  (Yes, they do melt in your pocket;  which is why Smarties are typically sold in stiff cardboard tubes [see pic] so that they don’t.)

And then we come to the piéce-de-resistance (brace yourselves, this is going to cause mass convulsions among the Wokistas): 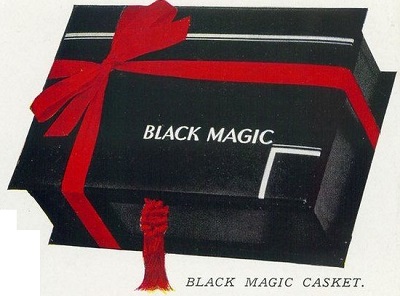 This cornucopia of delight was a staple among young men of my generation, serving as a fail-safe present for Mom on Mother’s Day / her birthday, and Valentine’s Day for the beloved girlfriend / wife.  (Yes, children, back in the day women actually ate chocolate without suffering agonies of conscience, and giving chocolate as a present did not engender [sic]  howls of accusation.)  You can get an idea from this wonderful launch ad: 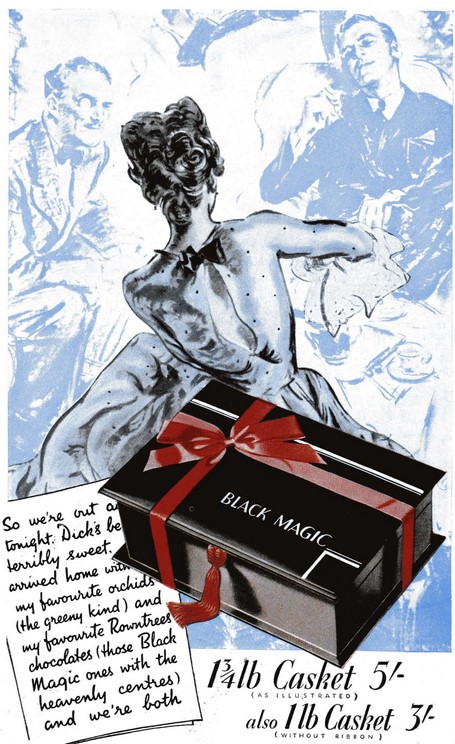 Even better was that the inside of the lid gave a map to the contents: 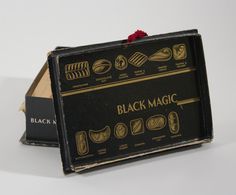 Now I know that calling it “Black Magic” would nowadays be considered the Ultimate Rayyycism, but in those days — and yes, this is going to sound weird to the Youngins — black packaging gave products an air of class (see:  limousine colors, tuxedo suits, “black tie” dress etc.), so the brand name was that, and also gave the product a slightly “wicked” feel.  Because even back then, we knew that chocolate was an indulgence, and fattening, and so on.  (I know, I know:  we Whiteys appropriated Black people’s skin color for our own ends.  Talk about wicked.)

So, to return to my original thesis (after wiping the drool from my chin):  yes, the Rowntree company has behaved abominably in the past, etc. etc.

But I think I can safely say that out of the suffering of slaves did come some of the greatest snack candies of all time, and that should count for something.

Afterthought:  it’s probably a good thing I don’t do social media, as one can hardly imagine the response to a humorous post like the above on Twatter or Faecesbook.