One-time F1 champion driver Kimi Raikonnen is famously bullshit-free;  while driving for Ferrari a few years back, he got irritated by the constant stream of advice and orders coming over the radio from the pit wall team, and uttered the immortal line:  “Leave me alone;  I know what I’m doing.”   He finished on the podium, driving a car that was truthfully speaking nowhere near the level of his competitors’.

And he’s back in the headlines today, posting this pic: 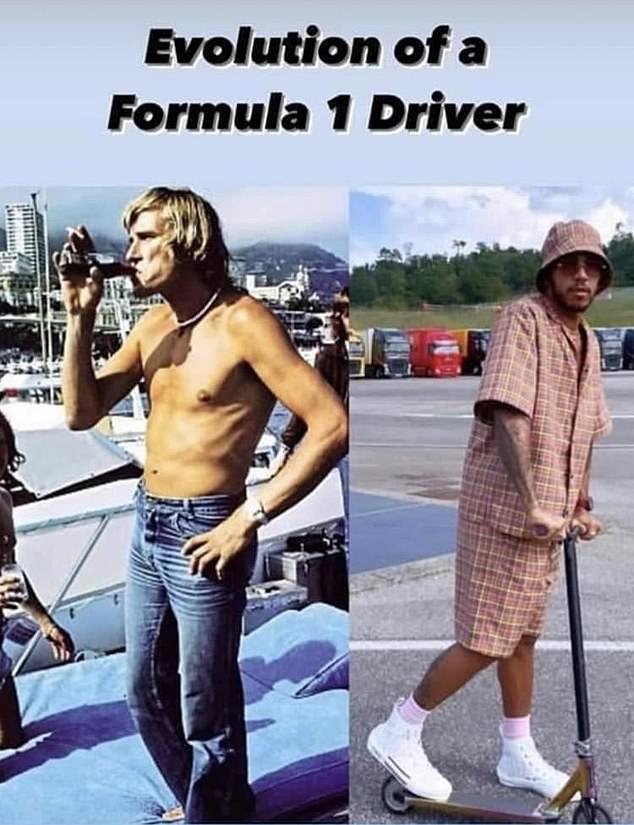 For those not in the know, that’s one-time F1 champion James Hunt in characteristic pose (missing only a pit bunny on his errr  arm to make it completely accurate), while on the right is Mr. Woke, Lewis Hamilton.

Now the Hamilton fanbois are going to point out that whereas Hunt and Raikonnen only won the F1 championship once each, Our Lewis has won it six times.   (In their defense:  Hunt and Raikonnen won their respective championships driving cars that were charitably called “competitive” at the time, whereas Hamilton is driving a Mercedes which has outstripped all other cars by a wide margin, for the past four or five years at least.)

Whatever.  Raikonnen is in the right, while Hamilton is left — far Left, with his BLM-kneeling and wokey T-shirts.

I wish Hunt were alive today:  he’d piss all over that T-shirt, probably while Hamilton was still wearing it.