This little piece caught my eye the other day:

A miscreant driver is facing a £100 fine after he drove along the middle lane of a motorway for three miles unaware he was being tailed by a police car.
The driver was making his way along lane two of the M20 in Kent, refusing to pull into the nearside lane as the law requires.
When pulled over by police, the motorist refused to accept that he had done anything wrong.
…
Kent Police tweeted with the photo: ‘This driver was stopped having driven for a colossal 3.050 miles in Lane 2 of the M20 without any other vehicles about. The driver refused to accept that this was Careless Driving. TOR issued.’

The attitude of the Kent cops is the same one which sees traffic wardens clamping ambulances which have parked in a no-parking zone while collecting an injured patient.

Seriously:  if the freeway is devoid of cars (stop laughing, American Readers), what possible harm can come from someone not moving into the slow lane?  Clearly, the Kent police have solved all the major crimes in their county, which frees them up to do bullshit like this.

All that said, I should point out that in Texas, at least, such driving is not an offense.  Not only that, but you’re allowed to overtake slow middle-lane traffic on the right (what the Brits call “undertaking”), which is appallingly dangerous because you often find people turning into the center lane from both sides.  It’s a recipe for disaster, and as someone who drives well over 500 miles a week on freeways, I have to be on my guard pretty much all the time.  [5,000-word rant on asshole pickup truck drivers and unlicensed/uninsured Mexicans deleted]

I know why people stay in the center lane, by the way — at least, why they do in Texas:  it’s because the right-hand “slow” lane is frequently (and without much notice) turned into an “exit-only” lane, which means that you have to scramble over to the left to avoid being forced off the freeway.  It’s one of the several things the Euros and Brits do better than we do, traffically speaking:  a turn-only exit lane is always added  to the freeway, which means that the ongoing traffic is not constricted.

I’m not even going to get into the lunacy of making 25-yard-long freeway entrance ramps (which are the norm in Texas), whereby drivers have to accelerate like fucking Max Verstappen just to be able to merge into the traffic, only to be faced by asshole drivers (see above) who refuse to let you take “their” place in the lane, or who are too busy undertaking another car in the center lane to notice your arrival.

Take a look at this picture (downtown Dallas freeways) and imagine negotiating this nightmare: 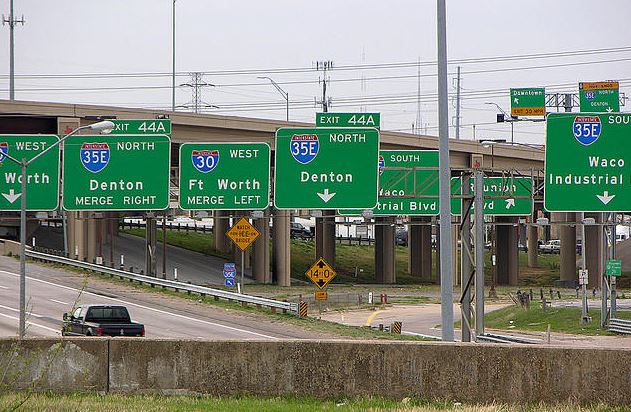 There is at least one serious accident at this junction every single day in the morning rush hour, and again in the evening.  (It’s even worse  a half-mile north, where I-35 is joined by the cross-town expressway and the Dallas North Tollway traffic, and contains not only exit-only off-ramps but a left-hand split into the DFW Airport Freeway, where one might have to cross six lanes over in order to get to the airport.  And did I mention the current road construction sections?)

It says something that after two years driving, logging nearly a hundred thousand miles with Uber, the only accident I’ve had was a minor fender bender (paradoxically) in a parking lot, where I reversed out of a parking space into someone illegally parked on a red line.

The plain fact of the matter is that in Texas, we drive too fast and too recklessly for the amount of traffic on the roads, and we are not helped by idiotic highway design.  By comparison, the Brit police can only look with relief on “problems” such as caused by someone not driving in the correct lane on a deserted highway.