Following the Top New Guns Of 2017, we now have the list of 14 Great Pocket Pistols for Personal Defense.

I’m going to start off with a question: how can a pistol with the following characteristics be called “great”?

The magazine is, of course, a proprietary design, and only certain kinds of ammunition can be used in the BullPup9. If bullets aren’t crimped tightly enough, the extraction of the round from the magazine can mechanically disassemble the round inside the gun. Also, only a limited number of guns are produced by Bond Arms each month.

Forgive me if I shudder at the thought of ammo being pulled apart inside the gun. I’m a huge fan of Bond Arms Derringers — owned one for many years and carried it as a backup with complete confidence — but I can’t help thinking they’ve stepped outside their area of expertise here.

But that’s just an aside. There’s a bigger issue at play, and it’s this.

I see the need for a pocket pistol (or, as we used to call them, “7-11 guns”) — you shove it in your pocket when you’re out running an errand simply because any gun is better than no gun, right?

Well, not exactly. If you peruse the above list of pocket pistols, what will strike you quite forcibly is that they mostly shoot lil’ tiny boolets because if you shoot something manly (i.e. effective), the tiny frames of said guns makes them almost impossible to control with any degree of confidence and therefore of accuracy. I’ve fired enough of the pistols on the list to be pretty sure of my ground on this issue — the little Kel-Tec, for example, is cheap, handy and not too nasty, but at any distance outside halitosis range, you’re almost better off throwing the gun than shooting it.

The guns that look as though they will be effective are, surprise surprise, the ones which are basically shrunken full-size pistols like the Kimber Micro 9 and the Glock 42 — which begs the question, “Why not, then, just carry their slightly-bigger brothers with confidence?”

I don’t like pocket pistols much, and I hate them as a primary self-defense weapon. And yes, I’ve been as guilty as anyone else when sticking a little popgun into my pocket when running out to make an emergency purchase from the liquor store or convenience store, because yes, I too can be lazy.

But it’s a bad habit, and I’ve worked really hard to overcome it over the years. Now, in those circumstances, I forget the pocket pistol and go instead with my backup handgun, a S&W Mod 637 Airweight chambered in .38 Special +P.

A wise man once told me: “If you use a pocket pistol on someone, there’d better be some serious powder burns on his skin afterwards” — in other words, you use it with the muzzle pressed up against his neck or chest before you pull the trigger.

And under those conditions, don’t bother with a pocket pistol shooting its BB +P rounds; use a decent pocket pistol, such as made by the aforementioned Bond Arms, but chambered in something like .357 Magnum, .45 Long Colt or .410ga (the last two, of course, being interchangeable). 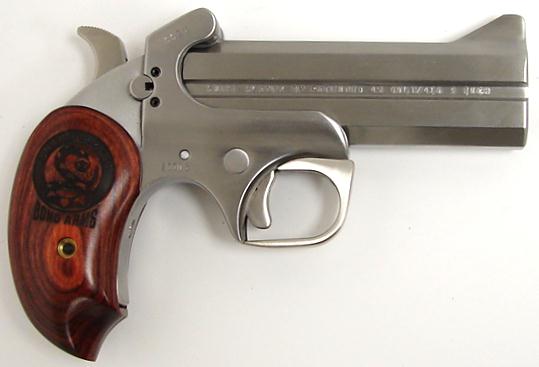 If you think of a pocket pistol as being “last-ditch” rather than “primary”, you won’t go wrong, I promise you.

To spell it out: the pocket pistol should be the third gun you carry, rather than the only one — and I would suggest that under those circumstances, you can do a lot better than any of the fourteen listed.