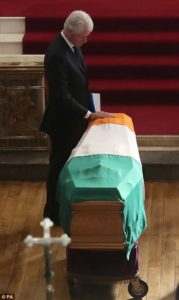 Like just about any normal person, I was sickened at this picture of Bill Fucking Clinton standing over the coffin of dead Murderous IRA Scum Martin McGuinness, offering his condolences and a touching eulogy. Why would he do that? From Peter Hitchens comes this little nugget (scroll down towards the end of the article if you follow the link):

Mr McGuinness was beyond doubt one of the heads of Europe’s most successful terrorist murder gangs. We cannot know what he may have done with his own hands, but we do know that he repeatedly ordered the killings of others. There is little doubt that he also approved acts of torture and kidnapping.
He did this for many years.
He did not stop doing so because he was sorry. Nor was he defeated. Delude yourself as much as you like, the widowmaker McGuinness was the conqueror of Britain. It is our army that went home. It was our surveillance equipment that was dismantled on IRA orders. The IRA kept their guns. We were the ones who had to disband the Royal Ulster Constabulary and its devastatingly effective Special Branch, because the IRA hated them. It was we, the vanquished side, who released scores of gruesome terrorists from just jail sentences.
It was we, the losers, who granted a de facto amnesty to any such killers we had not yet caught. It was we, the beaten, surrendered side, who had to remove the symbols of our former power, the Union Flag and the Crown of St Edward, from cap badges, flagpoles, official buildings and documents. It was we who agreed to pay the widowmaker McGuinness a salary of more than £100,000 a year, much of which he handed over to ‘the movement’. Why, we even forced the poor Queen to smile at him.
In the end, as we have agreed, we will also hand over a large piece of our sovereign territory to a foreign power. What sort of idiot calls this victory?
McGuinness was aided in this by the US President Bill Clinton, who happily travelled to this terrorist killer’s funeral. This is a piece of history I witnessed personally: Mr Clinton, trying to win back Roman Catholic working-class voters disgusted by his views on abortion, took money and backing from Irish America.
And when they came and demanded payback for their help, he kicked Britain in the stomach and welcomed Sinn Fein into the White House. And the British Government, seeing which way the wind was blowing, wavered in the face of terrorism. My, how it wavered.

The sooner the Clintons — all of them — vanish from the face of the planet, the better we’ll all be.