After I posted Every Picture Tells A Story last Saturday and admitted ignorance as to the artist behind the wonderful cartoon, I received an emailed suggestion from Longtime Reader Michael G., who included a link which didn’t give me the answer, but it did take my breath away.

You see, I have (yet another) deep, dark and deadly secret: in my yoot, I was addicted to pulp fiction novels. At the time (early 1960s) they were deemed Way Too Racy for a young boy by my parents, so I was forbidden to read them. I don’t know why they were worried: in my nine-year-old innocence, I had absolutely no idea what the sex scenes were all about, and I just skipped them to get on with the story (I told you I was innocent). Needless to say, the parental ban simply turned the novels into catnip for a cool cat like myself, so with the assistance of a scandalous uncle (who was only seven years older than I and therefore keen to help me out), I worked out a plan: I’d give Uncle “Locky” my pocket money to buy the novels “for himself”, and then after he was done with them, I devoured them (by the dozen), reading them late at night after my parents had gone to sleep to avoid detection, using either a flashlight or, if the batteries had died, reading by moonlight if available — hence, a partial explanation of the title of this piece. Here’s the actual cover which triggered this post: 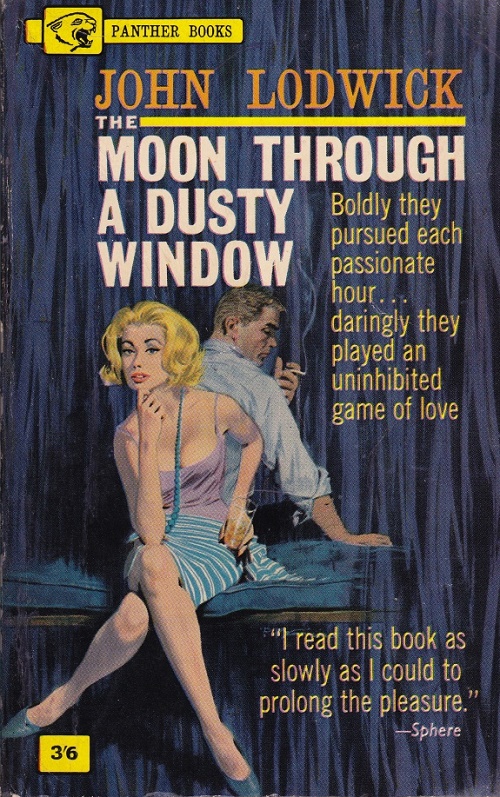 …and I got it from the treasure trove behind the link in Michael G.’s email.

To say that I was captivated by the covers of these old, long-forgotten novels would be the understatement of the year. Regrettably, none of the titles rang any bells in my memory — give me a break, it was over fifty years ago — but good grief, I spent hours looking at the covers this past weekend, still as enthralled as I was when a pre-teenager.

Of course, nowadays the blurbs could legitimately be terms “false advertising”, because seldom were the salacious hints actually depicted in the stories, mostly because of censorship whether editorial or governmental. And yet fools like myself (and there were probably hundreds of thousands of us) continued to buy the silly things week in and week out, hoping against that this time there’d be a really racy scene instead of something like:

“Come here, Big Guy,” she said, slipping the robe off her waiting body…

…followed by a chapter break. And I’m not even sure that that would have made it into print. Those were innocent times, my friends, and I’m thinking that I prefer them to our “modern” times, where “How To Suck Your Man To Orgasm In 30 Seconds” could be on the cover of Woman’s Daily — and the Cosmo cover would be even  more explicit.

It could have been Hemingway’s.