Looks as though the worm is starting to turn in Oz:

Wild scenes broke out in Richmond as a group of hooligans clashed with police trying to contain the violent ‘freedom rally’ march.

Police arrested 235 people and while most were taken away for breaching health directions, some were charged with assault, riotous behaviour and weapons and drug offences. Each will be fined $5,452, with 193 infringements handed out so far.

‘Angry aggressive young males (were) there to fight the police, not to protest about freedoms,’ he told the media late on Saturday.

Then again, I myself might have turned into an “aggressive male” (i.e. man) had I witnessed thuggery such as this:

An elderly woman was shoved to the ground and doused with pepper spray by two policemen during the Melbourne anti-lockdown riot. The woman was bowled over by the two cops before they fired the spray directly on her face as she lay defenceless on the road trying to shield her eyes.

Because this is Oz, public opinion was divided into two camps, i.e. “bastards” and “she deserved it for breaking the law”. 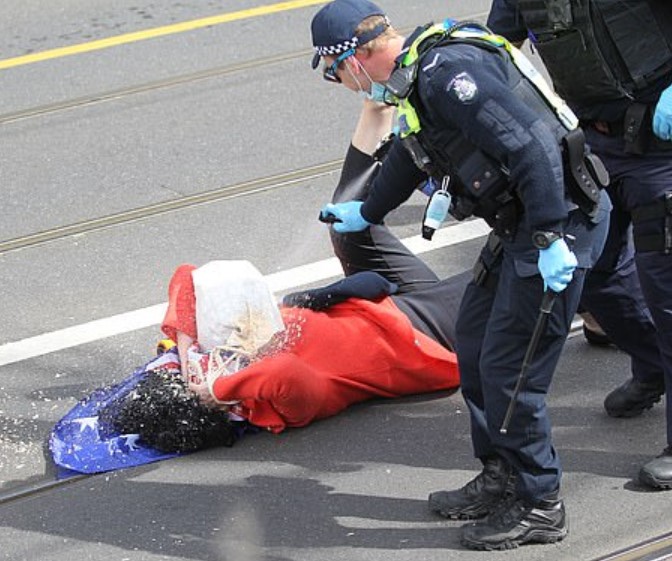 Please join me in a couple minutes’ silence to allow the RCOB to subside.

Note to the various OzGovs:  “breaking the law” means things like murder, robbery and violence towards the undeserving.  Protesting against totalitarian government is NOT breaking the law except in totalitarian countries like Iran and Communist China.

And now, it seems, Australia.