You know, when I talk about a gun that has taken my fancy (e.g. the gorgeous S&W Model 25 of last Friday), that doesn’t mean I think it’s the only good gun, nor even the best gun;  it just caught my eye and I felt like talking about it.

So when I drooled over the Model 25 (and 625), that didn’t mean I was ignoring others of the ilk, nor even saying ugly things about them.

Such is not the case among my Readers, yea even unto the Comments.  Saith Reader MPW250:

“Sorry, but being raised by one of the few (at the time) Colt New Service collectors, I have to disagree and go with a New Service in plain or Flat Top Target configuration.”

I know all about the New Service line — hell, back in the old Racist Republic, I used to carry a modified 1917 (shortened barrel, adapted to use moonclipped .45 ACP):

…because .45 Colt ammo was nowhere to be found in South Africa at the time, but .45 ACP was plentiful.

So don’t think I’m being dismissive of the Colt DA revolvers just because I was talking about Smiths.

And then there are the legions of Ruger devotees, such as Reader MikeL, who sent this to my email addy:

I have to disagree slightly on your choice of 45 revolver.
The model 25 is nice. Don’t get me wrong. However in addition to me being a much bigger fan of Ruger over Smith & Wesson – there is another factor.
The Ruger Redhawk 45. With the Redhawk you can not only chamber 45 ACP (using moon clips of course) but also 45 Long Colt.
This gives you a versatile tool.
Also with Ruger, according to Buffalo Bore Ammo, Ruger RedHawks can handle stout ammo. The Plus P 45 long colt approaches entry level 44 Mag level power.
And for those days when softer recoil is needed – 45 ACP or regular 45 Long Colt ammo types will do just fine.

Again:  I have nothing repeat nothing bad to say about the Redhawk — as with the 1917 above, I’ve actually owned one (albeit in the .45 LC-only version): 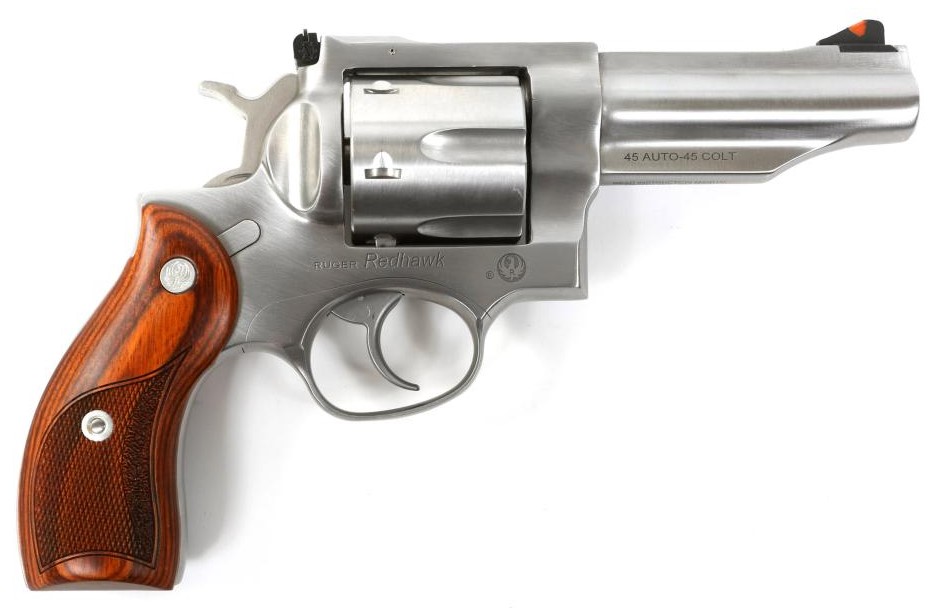 …and I loved the thing.

But (and I cannot stress this too strongly) on the day during which my gaze fell upon the S&W Mod 25 at Collectors, I didn’t see whether there were any Colt New Service revolvers, nor Ruger Redhawks either:  because I wasn’t looking for them.

So please:  when I drool over a gun, don’t think I’m making a comparison — unless I actually make a comparison (as I did between the two rifles chambered in 7.62x39mm last Saturday).  I know there are always different options, but let me rave on in peace.