As part of my desire to pull back from longer-distance shooting — perhaps “desire” is the wrong word;  “forced by crap eyesight” is longer, but more accurate — comes the need to look at a rifle which would suit my purpose better than those I already have.  Here’s one such example of a gun currently sitting in Ye Olde Gunne Sayfe, a CZ 550 (6.5x55mm Swede), topped with a Meopta 6-24x56mm scope:

As any Longtime Reader kno, I love me my 6.5×55 Swede cartridge, and I love equally the gorgeous CZ 550 Mauser rifle with its sweeeeet single set trigger.   To replace this beauty would require ripping out a piece of my heart;  but, at the same time, it has become too much rifle and honestly, would better suit someone who could actually use it to its full potential.  I’m not that person, anymore.

But if I were going to replace this paragon of excellence, the new bolt-action rifle would need to fill several criteria:  reliable, accurate, and chambered for a cartridge which would not require me to spend almost as much on new ammo as on the rifle and scope.  Something like the 7.62x39mm Russian (of which I have a ummm  modest supply already in Ye Olde Ammoe Locquer).

There aren’t too many of these extant, but here are a couple, with their comparative features side by side: 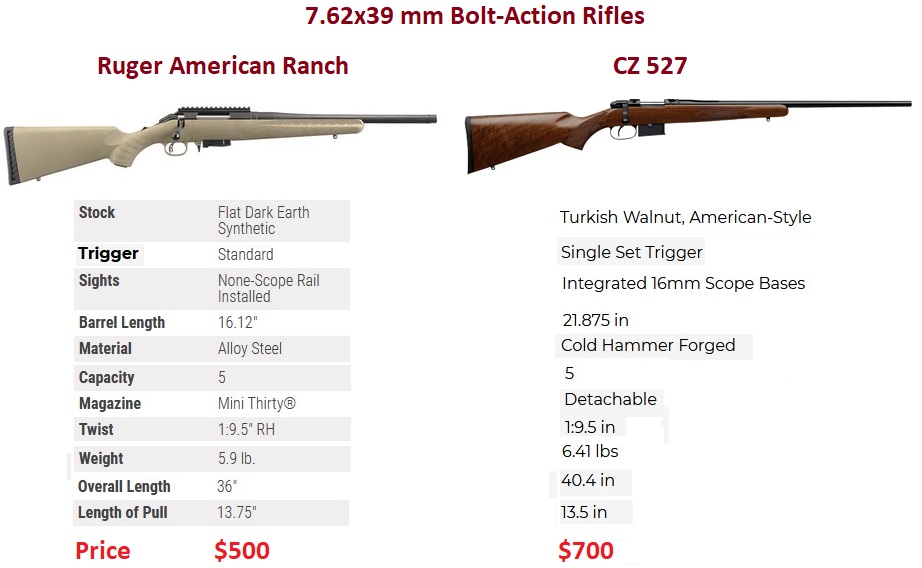 Given my long and affectionate relationship with CZ rifles, one would think that the 527 would have the inside track;  but I have to tell you, that stubby little bull barrel of the Ruger looks very tempting. I’m not too concerned about the difference in barrel length, because as it is, the 7.62x39mm works just fine in an AK’s 16.5″ barrel, and the shorter barrel would make the Ruger less unwieldy.

And I know that the Ruger’s standard trigger isn’t as good as the 527’s set trigger, but given the price disparity between them, a drop-in Timney (about $150) would still bring the Ranch Rifle’s price in below that of the CZ 527, and if I set it to a sensible 2.5lb pull, that would be more than adequate.

I hate the Ruger’s plastic stock material — or is it a painted laminate? either way, it’s awful — and of course the CZ’s walnut is exquisite by comparison, albeit somewhat heavier.

As for glass:  the 24x Meopta is much more than I need when my likely (and preferred) shooting distance would be somewhat around (and probably less than) 200 yards.  Something smaller (and lighter, as a bonus) would work just as well on either rifle, and I’d be looking at something like a Leupold 3-9x40mm 3HD, a Leupold 2-10x42mm VX-5HD, or else the Minox 2-10×50 ZX5i (all with illuminated reticles, to help my pathetic eyesight):

I have a long and satisfying association with both Leupold and Minox scopes too, so this would not be short-changing myself at all.

One more thing:  I’m not a huge fan of rail scope mounts such as on the Ruger, because they do raise the scope high off the action.  Low scope bases (lower even than on the CZ 500 pictured) would definitely work better for me.

As I said earlier, all the above is certainly food for thought, and I will be considering the whole thing carefully for a while before I drop the hammer, so to speak.  I hate selling guns, but if I’m replacing one that I can’t shoot properly for one that I can, it does make the process easier.