In 1985, I came to New York City for the first time.  I remember the almost unimaginable expectations I had:  the Big Apple, “If I can make it here”, and all that.

Of course, I arrived in the middle of a garbage strike, so the streets were filthy, mountains of trash bags were on every street, and rats the size of fox terriers roamed the streets like packs of hyenas, in broad daylight.

I remember being hustled on every block by someone, not asking but demanding that I buy their cheap tat of dubious origin, and every shop along the street was proclaiming that they had to sell sell sell all their merchandise NOW! because they were losing their lease.  (A total lie, like so much about New York.)

Then I went to the Lower East Side.

I was forcibly reminded of all this yesterday morning, when I saw this front page pic: 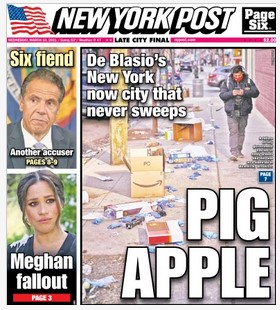 …and the accompanying article: 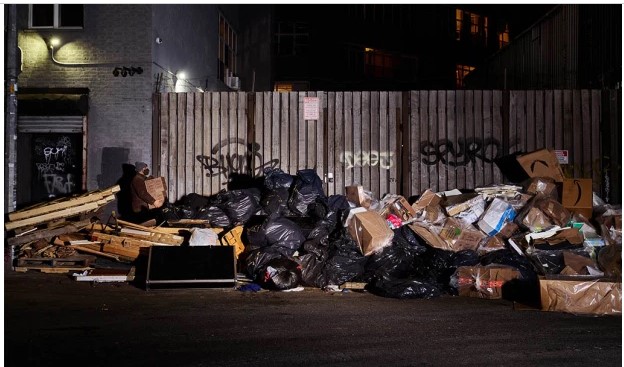 It’s been six months since the mayor promised to pump more money into the city’s street-cleaning efforts. And the trash problem has only gotten worse.
De Blasio in September announced initiatives to reallocate Sanitation Department funding to bolster litter-basket pickups in communities hit hardest during the pandemic, including Bushwick in Brooklyn. But according to the official mayoral report of “acceptably clean city streets,” street cleanliness there plummeted to 33.3 percent in January, compared with 86.1 percent the month before.
The same neighborhood scored 95.4 percent a year ago.

But this post isn’t about New York fucken City.  It’s about the whole country.

NYFC Mayor Bill de Blasio is quite clearly the most Marxist of all elected officials in the United States (residents of San Francisco, Portland and Seattle may quibble), and it is quite clear that what he is doing as mayor is just a microcosm of what his fellow Marxists are attempting to do all over the country.

They’re taking us back into the Third World.

Anyone who has ever spent any time in Third World countries will know that one of the most obvious manifestations of Third Worldliness is the amounts of trash that people there just toss out into the streets and out of car windows;  and when you travel through the countryside, fences will be plastered with plastic bags and other trash blown against the wire by wind. 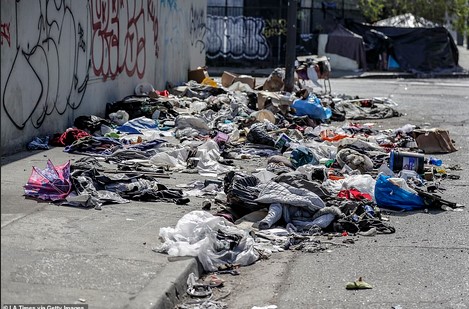 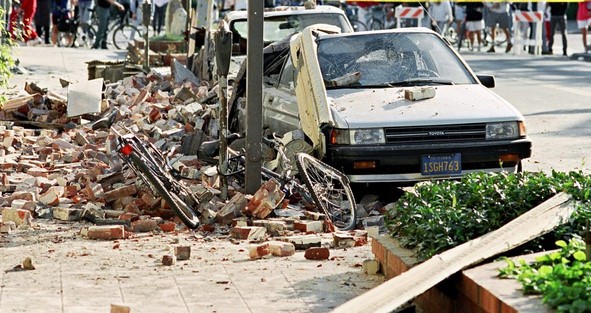 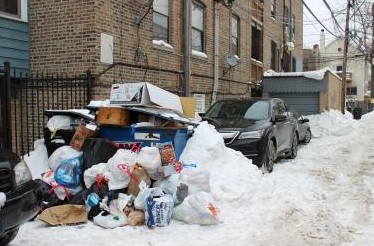 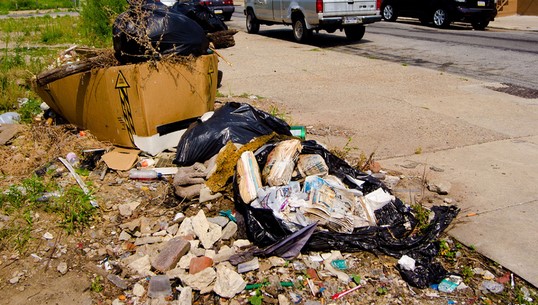 I could go on, but you get my point.

Let’s look at other aspects of the Third World… such as their elections.

In the main, Third World elections are corrupt, whether through the actual process or whether by fraud, suppression of the “incorrect” vote or denying impartial monitoring of the process. 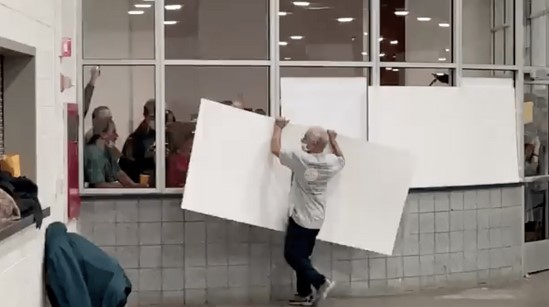 Here’s another example of blocking observers from checking the counting process: 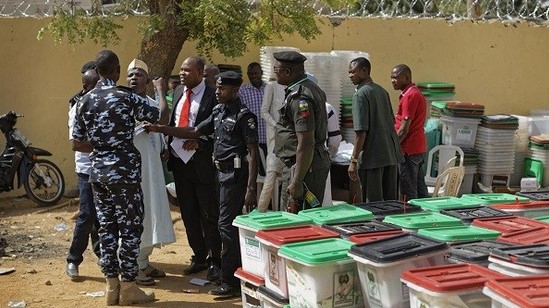 Oh wait, that’s not Detroit;  it’s Nigeria.  I was distracted by the razor wire atop the wall.

Does any of this ring any bells?

A new report on the vast expansion of mail-in ballots in the 2020 election is set to spark new concerns among some Republicans who back former President Donald Trump’s charge that some states went too far to change the rules — illegally.
Among the three “key takeaways” cited was this: “28 States changed their policy to make it easier to use a mail ballot.”
As a result, it added, “For the first time ever, more people voted early with a mail ballot or in-person than filled out a ballot at the polls on Election Day.”

Of course, the typical Third World mantra about elections is, “One Man.  One Vote.  One Time.”

So here’s the U.S. version:

It would be an understatement to describe H.R. 1 as a radical assault on American democracy, federalism, and free speech. It is actually several radical left-wing wish lists stuffed into a single 791-page sausage casing. It would override hundreds of state laws governing the orderly conduct of elections, federalize control of voting and elections to a degree without precedent in American history, end two centuries of state power to draw congressional districts, turn the Federal Elections Commission into a partisan weapon, and massively burden political speech against the government while offering government handouts to congressional campaigns and campus activists.

And that’s the opinion of the National Review, surely the most ineffectual and milquetoast collection of conservatives around.

And finally, let’s consider the corruption through nepotism that is a fact of life in the Third World — and now in the U.S. as well:

During his long senatorial career, Joe Biden cast himself as an everyman, “Amtrak Joe,” known for taking the train daily to Washington, D.C., from his home in Delaware. The image he sought to create was one of a simple legislator independent of the usual corrupting influences pols face.
In truth, Joe Biden knows those influences all too well. He heads up a family of wealthy lobbyists and political operatives who have spent decades trading on his last name.
In Profiles in Corruption, Peter Schweizer points out that the Biden family’s wealth “depends on Joe Biden’s political influence and involves no less than five family members: Joe’s son Hunter, daughter Ashley, brothers James and Frank, and sister Valerie.”

It’s taken the Left some time to effect their change of the United States, surely the first among First World nations, into a Third World state.

But here we are.