Longtime Readers will all know of my fondness for the venerable 6.5x55mm Swede (SE), and I happened on an article which gives chapter and verse to this wonderful cartridge.

With all due respect to its larger 7mm / .30 siblings, I stand firm in my belief that the Swede is quite possibly the perfect medium-game cartridge, the excellence of the .308 Win, .30-06 Springfield and so on notwithstanding.  When you take all the factors of shooting into account:  bullet velocity, flatness of trajectory, penetration, and most especially recoil, the sum of the Swede’s parts of this equation are probably higher than the bigger cartridges.  Here’s a pic I’ve posted before, comparing the Swede to its contemporaries: 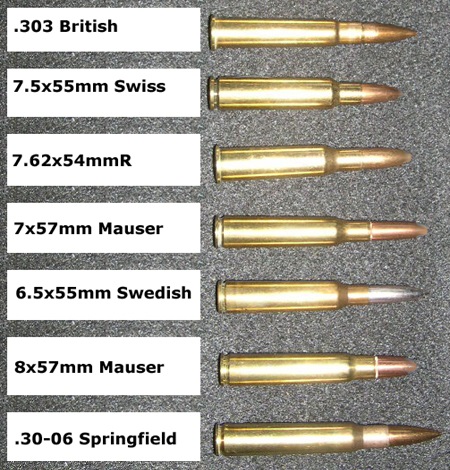 Here it us with some other “quarter-inchers”: 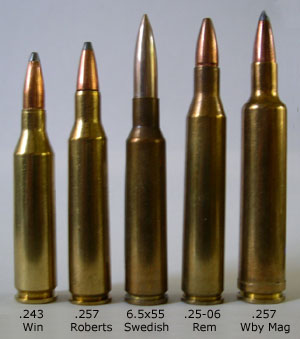 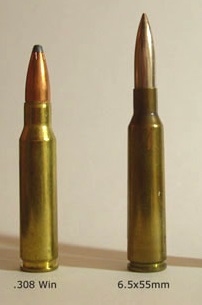 I will say unreservedly that if I were limited to only one cartridge for “ordinary” (i.e. excluding African large game) hunting whether human or animal, the Swede would get my vote ahead of every other cartridge I’ve ever fired.

The only caveat I have is that the Swede doesn’t seem to do as well in shorter-barreled rifles.  I think that in standard loadings — and certainly with the Hirtenberg mil-surp stuff — the bullet needs a longer barrel to get that bullet spinning towards its performance apex.  And the ultimate expression of that is in the wonderful Mauser Mod 96 with its 29″ barrel, as never used (in combat) by the Swedish Army:

In my earlier post on Great War Rifles, I said:

But of all the rifles issued to soldiers of that era, the one I’d have chosen to go to war with would have been the Swedish Model 1896 Mauser.  It has moderate recoil, yet the bullet travels flat and hits hard.  The rifle is also fantastically accurate: consistently-placed head shots at 400 meters and torso shots at 600 meters are quite possible even for an average shot like myself.

I haven’t changed my mind since.

That said, I have old eyes and the iron sights would be problematic — but mounting a scope on the old M96 can be tricky, with that 90-degree-lift straight bolt.  So I’d have to take instead my current love, the CZ 550 with its 24″ barrel:

Compromises… we all have to make them.