[Note: please forgive me for re-publishing this old piece. The past week has been absolute hell — I thought I was going to pass out from exhaustion from all the house-clearing-out activity, and a new post just didn’t suggest itself in time for publication. That said: of all the hundreds of posts I’ve written about guns, this is my favorite.]

May 19, 2007
2:00 AM CDT
We know all about WWII-era rifles, and of course the more modern ones. But let’s step back just a tad earlier, and consider the ones from my Grandfather’s generation: the bolt-action rifles which functioned, and functioned superbly, in the mud of Flanders and Verdun, in the deserts of Mesopotamia and Palestine, and the snows of Italy, Austria and Russia. I’m not going to look at all the rifles used, just the principal ones.

Of course, the Mauser K98 needs little introduction to any longtime Reader of these pages, but its precursor, the Gewehr 98 (or Model 98, as it’s sometimes called), was an excellent rifle by any standards, even modern ones.

The Gewehr 98 can be distinguished from its successor by its straight bolt, longer barrel (29”), and in earlier variants, by the “ski-jump” rear sight, which was graduated out to 2,000 meters (!). Add a 17” bayonet to this beauty, and the Imperial German Army had a weapon of outstanding value. Chambered for the fine 7.92x57mm cartridge (aka. 8mm Mauser and 8x57mm Mauser), this is a rifle for the ages.

The Mauser bolt action is still the most reliable ever made, as evidenced by its many copies, some of which we’ll see below.

If the Mauser action is the zenith of bolt-actions, the Mannlicher action would be the next best, and not far behind, either. Imperial Austria-Hungary’s Mannlicher Model 95, chambered for the hard-hitting 8x50mmR cartridge, was characterized by its straight-pull bolt, and the self-contained clip which ejected itself from the magazine when the last round in the clip had been fired. The sights were graduated using the archaic schritt measure (0.75 meter), to a maximum of 2,400 schritten (1,800 meters).

If the Austro-Hungarian Army left a lot to be desired, it was certainly no fault of its main battle rifle. The later rework of the Model 95 into the M95 “S” carbine (which paralleled the change of the Mauser Gew. 98 into the K98), and its re-chambering into the 8x56mmR cartridge, simply turned a fine rifle into an excellent one.

Essentially unchanged since the 19th century, the Mosin-Nagant Model 1891/10 was the perfect rifle for the Russian Army and its unsophisticated soldiers. It was reliable to a fault, used the wonderful 7.62x54mmR cartridge, and while not as smooth an action as the Mauser, the Mosin’s clunky action could not be broken—as evidenced by the number of old “91s” still in action today. Like the abovementioned Austrian M95, the Mosin 91’s sights were graduated in an archiac measure—the Russian rifle sights being measured in arshins, or .71 meters.

The 7.62x54mmR cartridges were loaded with a five-round stripper clip: 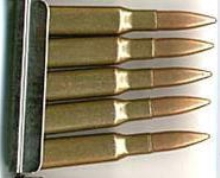 …but the WWI-era bullets were not pointed, but roundnosed (top):

Unlike what the Germans and Austrians did with the Gew. 98 and M95 respectively, though, when the Russians improved the 91 into the 91/30, they retrofitted and rebuilt their existing arsenal rather than reissue new rifles, so original 1891 or 1891/10 models are extremely rare today. Not that it matters much. The 91/30 is a fine rifle, and has all the qualities of the old one (and its sights are graduated in meters, withal), and the carbine versions (M38, M44 and the like) are still faithful to the old principles of simplicity and durability.

When the German Army was first repulsed by British defensive fire at the Battle of Mons in 1914, the Germans believed that they were being fired upon with machine-guns. Not so. The withering rapid fire came from professional British soldiers armed with the Short, Magazine, Lee Enfield Mark III Number One rifle (known then and now as the SMLE or “Smelly”), issued to all British and Commonwealth troops from 1907 onwards. Sights were graduated in yards, and the maximum (and optimistic) setting was 2,000 yards.

To work the butter-smooth bolt action of the SMLE is to fall in love with it. Also, unlike all other rifles of the era, which only had four or five rounds in the magazine, the SMLE’s magazine contained ten rounds—hence the volume of fire which a group of experienced soldiers could put down onto the foe before needing to reload. The SMLE’s mag is removable for cleaning purposes, but troops were only issued with one, which meant that reloading was done with stripper clips—and because said stripper clips were five-round clips, the mag had to be reloaded twice. Regardless: chambered for the powerful .303 Enfield cartridge, and with that action, the SMLE hit hard and quickly.

When the SMLE was later “improved” to the No.4 Mk.1, the action was left more or less untouched (thank goodness), but the rear sight was improved, from the barrel-mounted “V” sight to a receiver-mounted peephole, with two settings of 300 and 600 yards, and accuracy (the only knock against the SMLE) improved immensely as a result.

Amazingly, the Italians in WWI did not have their own bolt-action rifle, using instead a modified Mannlicher action in their Mannlicher-Carcano Model 91, which sported a 31” barrel.

Unlike the Mannlicher, though, the Carcano action was turnbolt (like the Mauser), and not the straight pull of the Steyr-Mannlicher Austrian rifle.

All other European (and American) rifles were chambered to shoot 7mm/.3xx bullets, but the “Carc” fired the smallest diameter bullet in Europe, the 6.5x52mm Carcano round, which was actually not a bad choice. The smaller, lighter bullet meant less recoil and its long, thin dimensions guaranteed excellent penetration.

Like almost all the other European nations, Italy would modify their WWI battle rifle between the world wars: the M38 (as the M91 became) had a shorter (21”) barrel and was re-chambered—I think, needlessly—for the heavier 7.35x52mm cartridge. The sights for the new rifle, instead of being adjustable, were fixed at 300 meters.

Of all the Great Powers, France alone came to WWI with an outmoded and obsolete battle rifle. The original 1886 Lebel rifle still fired the 8mm Lebel (8x51mmR) rimmed cartridge. Because the original Lebel had a tubular magazine, not a box, the bullets were roundnosed, not spitzers. Even when the Lebel was later transformed into the Lebel-Berthier Mod 1907/15 (below), with a three-round (!) Mannlicher-style magazine, French military doctrine still insisted that soldiers load cartridges one at a time, and use the magazine only under attack, when heavier volumes of fire were called for. The newer Mod 07/15 was only issued to the Army in large numbers in 1916.

A later version allowed for a five-round clip to be loaded in an extended magazine. Here’s what it looks like:

Only well after WWI did France introduce a brand-new bolt-action rifle, the MAS 36, in the new 7.5x54mm chambering—only to find that it, too, was soon out of date compared to the new wave of semi-automatic battle rifles.

In 1906, Japan introduced the Type 38 rifle to replace their Murata Type 22 rifles (which fired the 8mm black powder cartridge). The Type 38 was mostly derived from the Mauser bolt action, and had a 31 ” barrel. Called the “Arisaka” after the man (Colonel Nariake Arisaka) who headed the Army’s commission to test and adopt the rifle, the Type 38 was chambered for the rather weak 6.5x50mmSR (semi-rimmed) cartridge.

The Type 38 was known chiefly for its bolt carrier dust cover, which was supposedly added to protect the bolt action’s workings from dust and especially moisture, but which rattled alarmingly in action, and most soldiers simply removed and discarded them.

Alone among the Western Allies, the United States issued two rifles to their doughboys: the Springfield M1903 (top), chambered for the fine .30-06 cartridge, based on the Mauser 98 design, and the M1917 Enfield (also known as the Pattern 17 or P17). The latter was based on the Lee-Enfield Pattern 13 (itself a Mauser-like design), and like the ‘03, chambered for the .30-06.

The ‘03 had problems because of inferior metallurgy (later improved) in the receiver—that, and the shortage of ‘03s, resulted in more doughboys using the P17 than the Springfield. Like almost all the WWI battle rifles, the ‘03 was later modified/improved as the ‘03-A1, except that unlike the other rifles, this one saw service as late as the Vietnam War. The P17 pretty much disappeared after the war, but lived on in gun safes and hunting lodges all over the United States. Both are superb rifles, as much for their respective heritages as for their reliability, accuracy and efficiency.

As the saying goes: “In the First World War, the Germans had the best hunting rifle, the Americans the best target rifle, and the British the best battle rifle.”

I think, however, that it also behooves us to look at two European rifles of the same era which saw no combat: the Swiss Schmidt-Rubin K11, and the Swedish M96 Mauser.

First introduced in 1896 and improved in 1911, chambered for the powerful 7.5x55mm Swiss cartridge, the K11 had a straight-pull bolt action, and was unquestionably made to the highest quality standards of any rifle of the time (and higher even than many production rifles of today).

The K11 is a marvel of functionality, its workings intricate and precise, its accuracy outstanding. Interestingly enough, the Swiss would do to the K11 what the Germans would also do to the Gew 98: shorten the action a tad and shorten the barrel to carbine length, but retain the original chambering (7.5x55mm for the new K31, and 8x57mm for the K98). Both rifles were immeasurably improved by what was basically a simple set of changes.

The Swedish Army issued their soldiers with the Model 1896 in that same model year, choosing to chamber it in the superlative 6.5x55mm cartridge (probably my favorite medium-caliber cartridge of all time), and they didn’t change anything about the rifle (other than creating a carbine version) until they changed their entire infantry philosophy and armament to semi-auto rifles in the mid-twentieth century.

If I’d had to go to war in those times, I would have felt quite comfortable being issued with either the Mauser-action Gewehr 98/Springfield ‘03, or the Enfield-action SMLE/P17.

As a “second-tier” choice, I wouldn’t have felt that short-changed with the Steyr M95 or Schmidt-Rubin K11 either.

But of all the rifles issued to soldiers of that era, the one I’d have chosen to go to war with would have been the Swedish Model 1896 Mauser. It has moderate recoil, yet the bullet travels flat and hits hard. The rifle is also fantastically accurate: consistently-placed head shots at 400 meters and torso shots at 600 meters are quite possible even for an average shot like myself.

It’s too bad the rifle itself never saw service, because it would have acquitted itself well against any of the others.

Here’s the interesting thing about these rifles as a group: all performed well in the horrible conditions of First World War trench warfare; all provided their owners with excellent striking power (as witnessed by the millions of soldiers felled by them), and all were, essentially, first-generation bolt-action rifles shooting smokeless powder cartridges. Later on, faced with the next world war, all would be improved, whether in length or (occasionally) in caliber. The WWII generation of these rifles would be better than their forebears—but not that much better.

Only the advent of a revolution in infantry tactics and the introduction of the semi-auto rifle would finally put these fine old bolt-action rifles to rest. But despite all that, most are still capable of working as effectively today, over a hundred years later, as they did on the day they were issued.

We should all be so well-made.