I have a confession to make.  While I’ve hunted animals all over the world, the only one I’ve stayed away from (because cowardice) is the South African Cape buffalo.  Other reasons:  if you wound them, they will probably come after you — I believe that it’s the animal which has caused more professional hunters’ deaths than any other, and if I recall correctly, by a large margin. 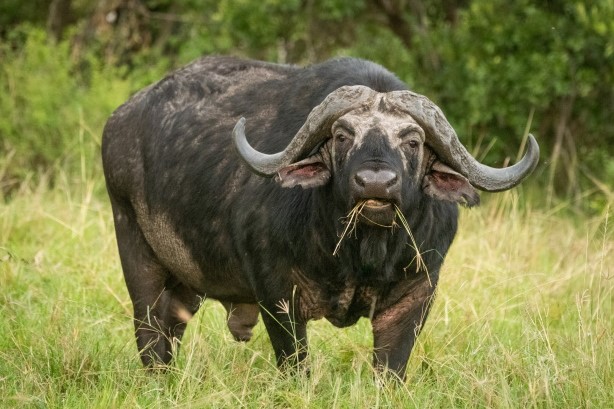 As the late Peter Capstick (who wasn’t killed by a buff) once said:  “They look at you like you owe them money”, but while I would defer to his judgement in everything else, in this case he’s severely understated the case.  Maybe that’s how they look at you when they’re in a good mood, but they’re so seldom in a good mood, who would know?  Their look is not so much a glare as a challenge.  In the above pic, which shows an old bull, please note that his bad mood may have been caused by the lions which left the scars on his back, and while they’ve healed, he hasn’t forgotten about it.

Small wonder that lions will almost always try for buffalo calves, because even when a cow gets into the picture to protect her calf, she won’t follow up the attack once the lions have given up on the calf and slouched off to find an old wildebeest or some other alternative.  However, this is not the case with buffalo bulls, who will not quit until they’ve disemboweled a lion or two and stomped on the remains with their broad hooves.  Lest anyone think I’m exaggerating, allow me to recount the tale of what happened to Doc Russia and Mr. Free Market on their last buffalo hunt.  (As a point of interest, both men were using rifles chambered in .375 H&H, which is the absolute minimum.)

Mr. FM had bagged his buff the day before in a fairly short hunt, and now it was Doc’s turn.  His luck was not as good as Mr. FM’s, and it took him a while to find a decent target.  Eventually, the guide spotted a pair of young bulls grazing together, and Doc decided to take one, which he did.

To everyone’s astonishment, the other bull didn’t disappear off into the wilderness;  oh no, he sauntered about a hundred-odd yards away, turned and watched his buddy die.

The dead buff was loaded up into the truck and back they all went to the hunting camp.  I say “all”, because the surviving buff followed them all the way back to the camp. Clearly, he had mischief on his mind, and had the camp not been a large one, everyone involved might well have become the targets of his revenge.

What’s even more interesting was that they weren’t aware that he’d followed them — until the next day when they went out and saw his tracks leading from the death scene all the way back along the side of the road — but not on it — and they had no clue that he was there.  (Despite their enormous size, Cape buffalo move through the bush like shadows.)

I told you all that so I could tell you this.  The above pic is part of this article, which talks about the optimal cartridges for dangerous game.

You’ve probably heard it before, but it bears repeating here: cape buffalo are really, really big and really, really tough [and really, really mean — K].  As a point of reference, a big bull can weigh twice as much as a mature bull elk.
Buffalo have thick hides, dense muscles, and heavy bones that are known for defeating lightly constructed bullets. Since buffalo are often encountered at close range and in thick cover, the margin for error is very small and more than a few hunters have lost their lives (or spent time in a hospital) as a result of poor bullet performance.

Go ahead and read the rest of the article:  it’s a good one.  And even if you never hunt Cape buff, just tip your hat to the guys who have, and will in the future.  There is no bigger (and potentially more-dangerous hunt) than this one.

Update:  Mr. Free Market sent me a pic of his buff: 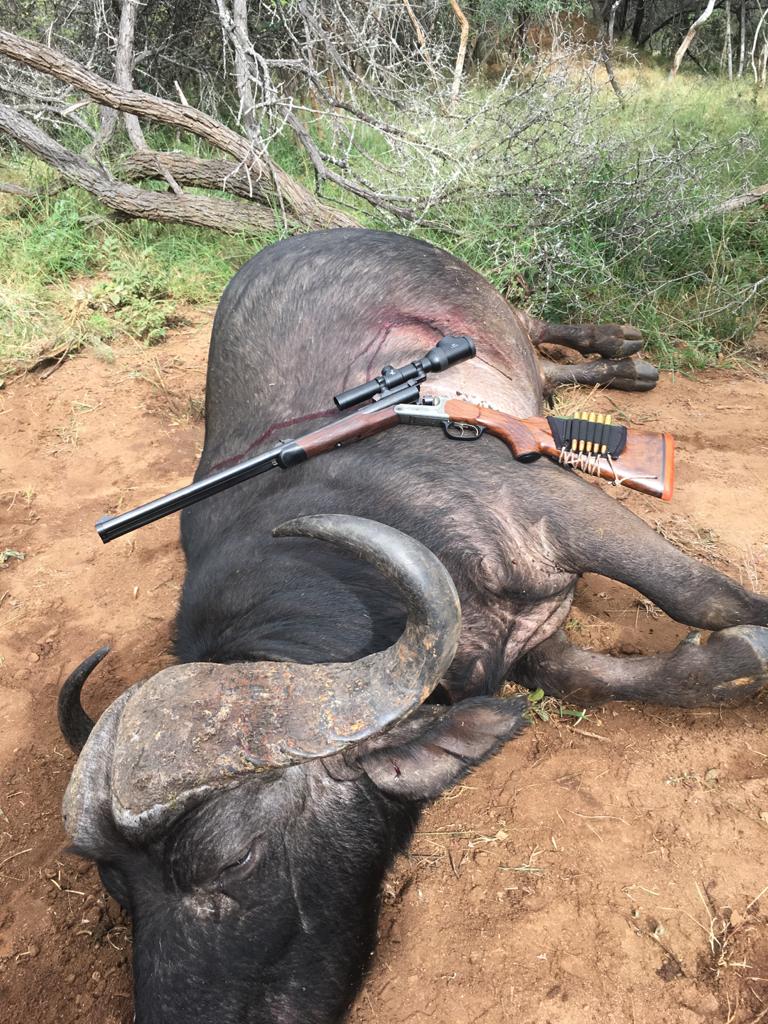