…that the Clinton Crime Family wasn’t always up to its ears in corruption and criminal activity.  From someone who was there:

Birkenfeld, who years ago made a series of disclosures about American clients of UBS Group AG who evaded hundreds of millions of dollars in taxes in the United States thanks to Swiss bank secrecy arrangements, told The Epoch Times’ Joshua Philipp in an interview that members of the Obama administration cut a deal with UBS that led to the bank paying a settlement of $780 million and only having to divulge the names of around 4,700 out of some 19,000 tax evaders.
He claimed that then-Secretary of State Hillary Clinton was “criminally complicit” for her actions in brokering an agreement between Swiss authorities and the Internal Revenue Service (IRS) in the case against UBS, which led to a deferred prosecution agreement on charges of criminal fraud.
“Not only was Hillary Clinton criminally complicit, she… why would the Secretary of State be involved in an international criminal investigation? That’s your first question. The second question is, when there were 19,000 accounts that I handed over to the government, why did Hillary Clinton only settle for 4,700 accounts? That’s a 75 percent failure rate,” Birkenfeld said.

I have no idea what’s involved with all this, but I would put some serious money on a number of wealthy Clinton and Obama supporters (and the Clintons themselves) being among the tax evaders who escaped justice.  It is precisely this kind of thing that they specialized in, whether when Billy-boy was POTUS or when their surrogate Comrade Urkel was running the show or when, as above, Her Filthiness was SecState [some overlap]. 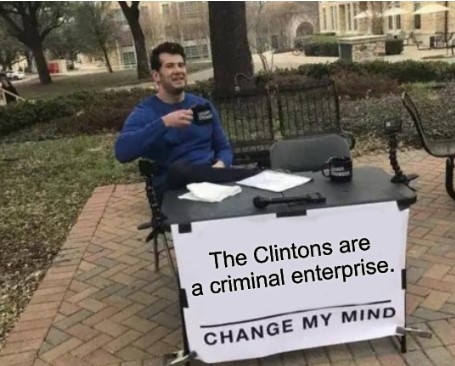