The .22 Magnum: Good for Self-Defense?

I’m going to put my bias out front:  I love the .22 Magnum cartridge, when I’m shooting it in a rifle.  On varmints, I can personally attest that it’s absolute mustard;  I’ve shot maybe a dozen African silver-backed jackals with the .22 Mag, all were one-shot kills and only one of the little beasts made it more than a couple dozen yards before dropping like a stone.  Rock rabbits (Seffrican:  dassies), maybe thirty or so, with only one which ran off and I never found (probably a clean miss, as there was no blood trail).

And as Longtime Readers know, I carry a little .22 Mag NAA Mini-revolver in my pocket against the threat of snakes when I’m out anywhere near Texas brush country (e.g. the little creek which runs past our apartment complex), but it’s loaded with #9 shot shells, not boolets. 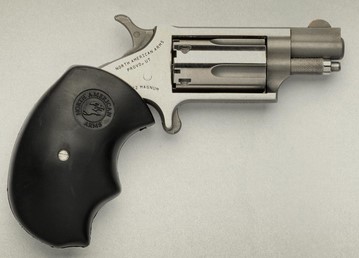 Now:  would it be pleasant to be shot in the face with one of these?  No, of course not.  Would even that stop a hopped-up lunatic with a knife?  You can try it out;  I’ll stick to a .45 ACP, thank you, if that situation presents itself.

As the above article suggests, the .22 Mag is a little powerhouse out of a rifle barrel, but out of the typical short-barreled revolvers which typically carry them:  not so much.  Sometimes you can ask just too much out of a .22 bullet, and self-defense would be one of those times.