No, I’m not referring to that Girl Scout Parking Lot Incident of 1975 (and she looked way older than 15, anyway), I’m talking about the Great Ammo Shortage Of 2020.

FFS, if Magtech ammo is in short supply, we’re all doomed.  But to continue:

Usually, that only applies to personal protection ammo, but right now, even hunting ammunition could be impacted.
“Usually shotgun shells are around, they’re plentiful, but we had another manufacturer telling us it’s the parts to make the ammunition … the primers are on a one-year backorder,” Phelps said.

South Dakota Game Fish and Parks says they’re not too worried about the ammo shortage impacting this year’s hunting season because most hunters are already well-stocked.

As should be all experienced shooters.  Personally, I start getting “shortage fear” when I’m down to my last 1,000 rounds (in any caliber except .22 LR, when it’s 10,000), so right now  I can afford to wait awhile till the shortage eases, as I think I have enough to last me a couple of years (lifetimes, according to the Son&Heir, who usually has to help me move the stuff from one house to another).

And they said National Ammo Day was a foolish invention… 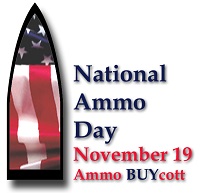 Looks like it’s going to be a little more difficult to get that 100 round-minimum this year.  I can’t decide whether that’s a Good- or Bad Thing.