Every so often I get it right.  A few years ago, Mr. Free Market decided that he wanted to go hunting in Africa — South Africa, as it happened — and asked me for any tips I might have which would make his trip more successful.

There’s not a whole lot I can tell Mr. FM about hunting — he’s an excellent shot, has hunted all over Europe and despite all his skill, he’s always willing to learn more, whether from his guides or from other hunters.  Needless to say, he’s a very successful hunter, as I’ve occasionally noted on these pages.

I thought about it for a while, and really had only two pieces of advice:

Use enough gun.  African game is unbelievably tough, and what would be a killing shot on a North American whitetail with a .30-06 will not anchor a similarly-sized antelope (e.g. blesbuck) on the African continent.  Even a tiny warthog, when whacked with a light cartridge like the .30-06, will run for over a quarter-mile before dying.  The very fact that a .30-06 is characterized as a “light” cartridge should be a warning.  I used to hunt with either .308 Win or 7mm Mauser, but if I was going to shoot anything large or dangerous, I used borrowed rifles in either .375 H&H or (only once, because owie) .458 Win Mag.
But Mr. FM had that covered, using a .375 H&H Magnum chambering which could handle pretty much anything short of elephant or rhino.

The next piece of advice had nothing to do with hunting.

Get a suntan before going over.  Nothing quite prepares you for the African sun, especially if you’re hunting at higher altitudes than a few hundred feet above sea level.  You would think that as you go higher, the weather becomes cooler;  no, it just gets less humid.  (Think:  Arizona high desert vs. South Texas Hill Country, only with Arizona about ten degrees hotter.)
And Mr. FM is a Brit, with the typical fair skin — not, thank gawd, the fish-belly white of the Irish — that has led to all Brits being known colloquially as “Rooineks” (red necks, from the sunburn) by the locals.

So he did, visiting a tanning salon every other day for a couple-three weeks before setting out.  And on his return, Mr. FM said that of all the advice he’d been given, that was the best.  And even after arriving in South Africa with what he thought was a deep tan, he went still several shades darker after a week in the bush.  Had he not had the tanning sessions, he admitted that he’d have been confined to the indoors after the first day’s hunting.  And that’s no way to go through a hunting trip, son.

So why am I talking about this?  Because I was reminded of the topic by this picture, seen in The Sun [sic] newspaper: 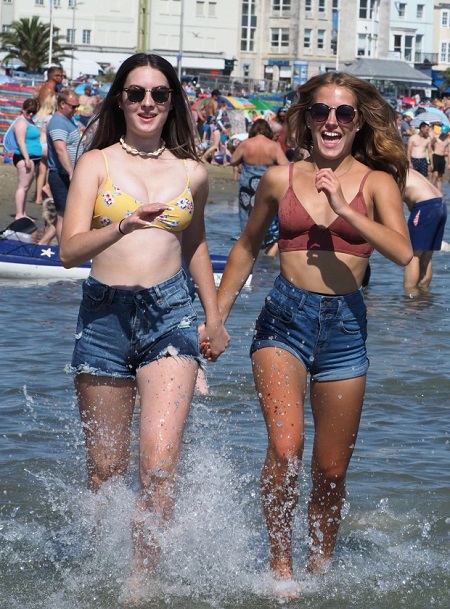 In Africa, the girl on the right would burn slightly after a couple hours outdoors;  but the pale one on the left would blister after maybe fifteen minutes.  Yes, it’s that bad.