Finally — finally! — I was able to get to the range yesterday, and I think the sighting-in is almost complete.  Good grief, it’s been so long (thank you, Chinkvirus), that I probably need to remind y’all what the heck I’m talking about (link): 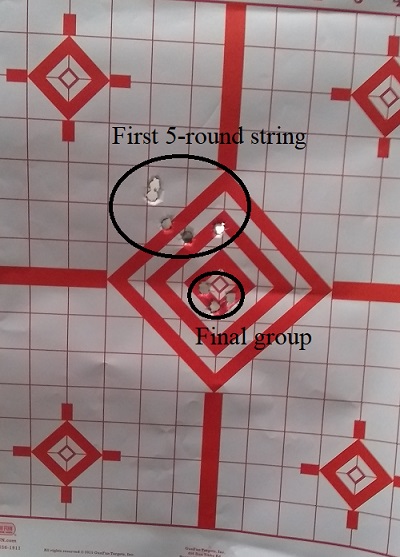 That was with El Cheapo (Prvi Partizan) ammo.  LOL on me, by the way:  in the five-shot group, the bottom three were the first fired;  then I adjusted the scope and fired off two (the top two that are almost touching) — only I adjusted the scope UP instead of DOWN because Idiot Kim.  Finally got it more or less right, although I’m peeved that none of the final three were touching.

Next week, I’ll try a couple different makes over two or more range sessions, see which one works best, and then hold the drawing next weekend.   Which means the Hawkeye should be on its way to its new owner around August 20.

Good luck to you all.