And we all thought Obama was the world’s best gun salesman.  We didn’t know about the Chinkvirus:

There have now been an estimated 8.3 million firearms sold in the United States since March—a record-setting pace likely to make 2020 the greatest year for gun sales in American history if the trend continues.
Gun and ammunition retailers are having trouble keeping up with the demand as Americans flood stores.

And a quote from an FFL:

“Pretty much everything is out of stock. We have been doing it since the late ’70s and have never seen literally no supply available. As of last week, at all major distributors you could not get any guns. Everything was literally sold out. Can’t even get hearing protection.”

At my local FFL, I’m told there’s at least a two-month wait for a whole bunch of guns — and an indefinite wait for AR-15s.  I often use Bud’s Gun Shop as a dipstick into the state of the firearms business (also to get an idea of prices), and here’s what a cursory look showed me.  If I applied only two search filters (semi-auto  and 5.56mm NATO ), here’s what came up as being in stock (out of 560 items listed):

…in other words, a “California compliant” monstrosity that nobody wants, and an overpriced POS from Colt.  Everything else — Palmetto, IWI, S&W, Ruger, SIG, Daniel Defense, DPMS, Diamondback, you name it — was out of stock.  Even the Ruger Ranch Rifle was MIA.

One of my contacts at a major distributor confirmed that Bud’s and my local guy are the norm, not the exception.

So I went to Option B:  semi-auto rifles in 9mm Parabellum, once again at Bud’s, who typically advertises / carries about a hundred and thirty different models.  Here’s what they had: 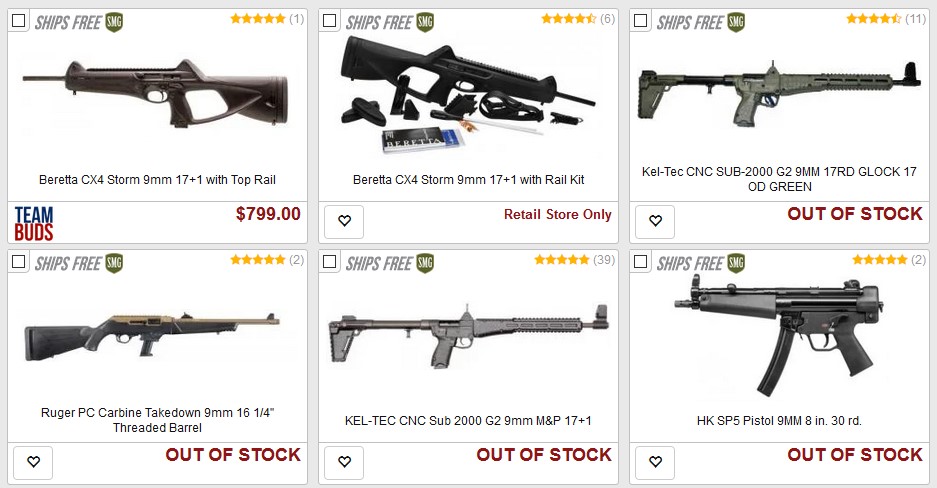 All the rest were MIA.  And note that in the above, I said “had”.  When I went back a few hours later to check, even the Beretta Storm was OOS.

And if people are buying everything in sight in 5.56mm and 9mm, that leads to… yup, ammo scarcity.

Windham Taylor, the outreach manager for Ammo.com, one of the largest ammunition dealers in America, said the company experienced the same strains as the gun dealers. Demand for popular self-defense rounds such as 9mm and 223 has kept the store scrambling to find stock to keep their customers supplied.

Now for my Loyal Readers, none of this is either surprising or alarming.  We have (don’t we? ) an adequate sufficiency of both guns and ammo to tide us over — hell, ammo-wise, in some calibers I’m still living with stuff I purchased during the Dubya Administration — which should keep us going through this rough patch.

And speaking of the Dubya Administration, I remember posting back then:  “These are the Good Times for us gunnies;  this is the time to buy guns and ammo, when restrictions are few, supplies are plentiful and prices are sane.”  I recall that many of us heeded that — at least, according to Reader feedback — and I know that I took my own advice, bigly.

The economic lesson is timeless:  don’t buy during times of scarcity;  buy in times of plenty.

If you do have an itch to buy a gun (and don’t we all, all the time?), this might be a good time to look at bolt-action rifles, lever-action cowboy guns and some revolvers. We all know that in a pinch, a lever-action rifle can do sterling duty as a replacement self-defense gun — yeah, it doesn’t have a 200-round magazine — and I for one would not feel undergunned by any means, if that were all I had.

Back to Bud’s, where if we look at just .45 Colt (because neither the guns or ammo are scarce at the moment), we find that there are over 90 options available, e.g.: 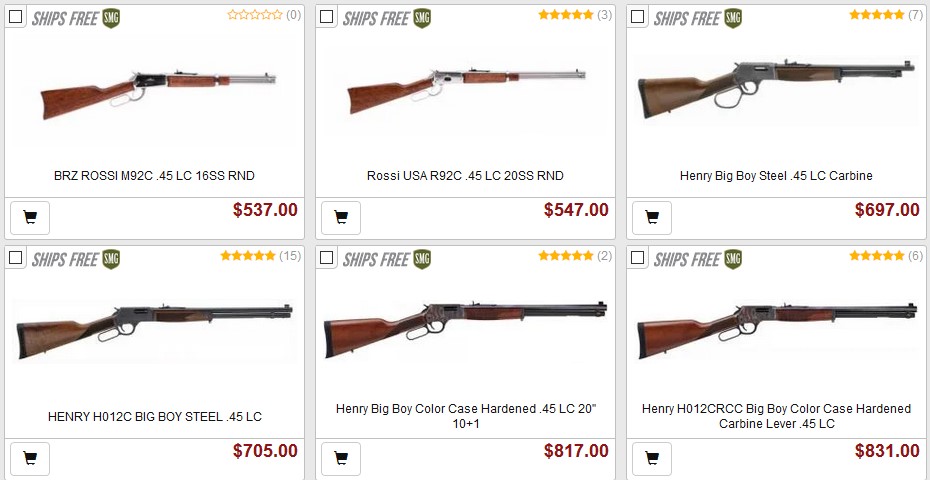 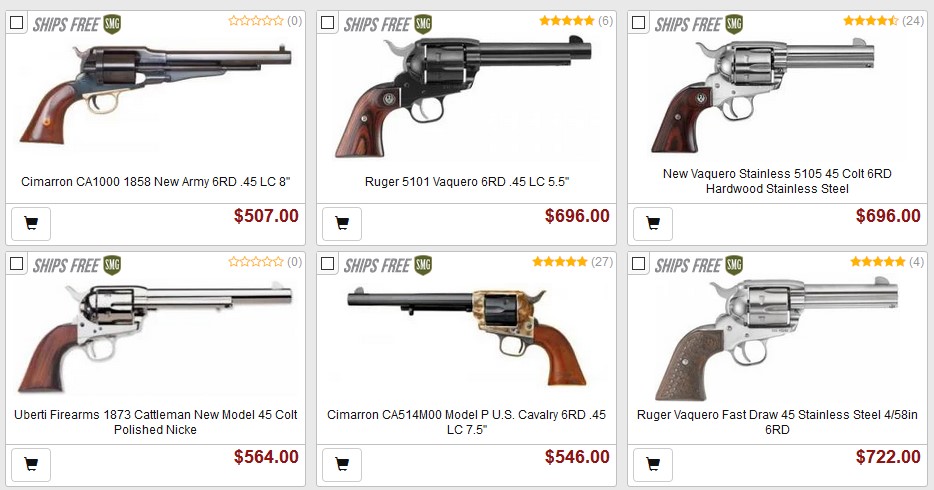 Ooooh that’s better.  In fact, you have to get to Page 3 before the guns start running out of stock.  (Gotta say, Kimmy likes the look of this one, oh yes he does):

…but let’s not get sidetracked here.

One more time:  I accept no responsibility for bank accounts emptied, kids’ college funds raided nor relationships wrecked as a result of the above temptations proving too difficult to avoid.

An aside:  I checked on my stocks of AK-47 feed (7.62x39mm) the other day, and discovered that I had only a single can (~600 rounds) left.  EVERYBODY PANIC! until I discovered a couple of cases lying forgotten in some remote part of the garage — and then, by some cosmic coincidence I’m not even going to try to explain, I got a call from the Son&Heir, who wanted to know why he had five cases of 7.62x39mm in his garage when he doesn’t own an AK.  Guess I lost track of them in the move from the old house.  Panic over.