Last week I started talking about going for a gun that is a little more than utilitarian, and I want to explore this topic a little further today.  Before I get started, however, I want to state categorically, as I have done in the past talking about “dress” watches, that this is not about pure utility:  we all know that a Timex works as well as Raymond Weil watch, and a 1950s-era Winchester 94 lever rifle will work just as well as one of the ornately-carved “commemorative” modern ones.

This is about going with something “finer”, whether in finish or even in function, rather than settling for just the “adequate”.

Many years ago, I made my first haj  to Collector’s Firearms in Houston, and met the owner.  He knew about me, of course, because then (as now) I often featured pics of guns from his website, and always with attribution.  I had, in a nutshell, driven lots of business his way.  One lovely story he told me was when I featured a Swedish Mauser Mod 96 41B “sniper” rifle on my old website, and drooled all over it, as is my wont with exquisite quality rifles.

Apparently, it was sold the very next day — but later on, over that and the next few days, about a dozen people either came into the store to buy it, or called to see if it was still available.  All had to be sent away disappointed.

Anyway, we chatted a while, and then he excused himself for a moment, then came back with a rifle, asking “What do you think of this?”

It was a Mauser Mod 11/84 (pre-Mauser G98) from the 1880s, only this wasn’t any old rifle:  it was a carbine (which I’d never seen before in 11/84), but it had a couple of other features which made my jaw drop.  For a start, it had an octagonal barrel with gold inlays, had an action so smooth that I have never since experienced its equal, and boasted a stock which featured various hunting scenes in bas-relief, carved in detail so fine that it looked as though dental tools had been used in its manufacture (which, incidentally, was indeed the case).  Condition?  It looked as though it had been completed the day before.

It was Kaiser Wilhelm II’s personal hunting rifle.  And for a collector of guns or historical memorabilia, it was almost literally beyond price.  Like a $75,000 Vacheron Constantine watch, this moves far away from the “utilitarian” category and into the “investment” one — and that isn’t the purpose of this post.

So let’s step down a   lot from that, because that’s a one-of-a-kind, no-expenses-spared kinda gun.  That’s the far end of the spectrum, which we mere mortals cannot aspire to.  But between that and a rusted-out old lever rifle, of course, is a dizzying array of choices, and I want to talk a little about the segment that is just a little over the purely utilitarian.

To be honest, the “Iron Triangle” of guns (cost / quality / utility:  pick two) has to apply.  The Kaiser’s rifle, for example, scores a 0 in terms of utility because you’re never going to take it hunting (quite apart from the difficulty of finding 11mm ammo).  Your new Winchester 94 .30-30 is going to score highly on cost (low) and utility (everyday), but let’s be honest:  that’s not a pretty gun.  To make a lever rifle “pretty”, you have to go into the Dark Arts of engraving and carving;  and I would argue that that activity falls into the “lipstick on a pig” category — you can, but why?

Also, engraving — fine engraving — is really, really expensive.  It’s one of the reasons why you pay an absolute fortune for a Holland & Holland shotgun: 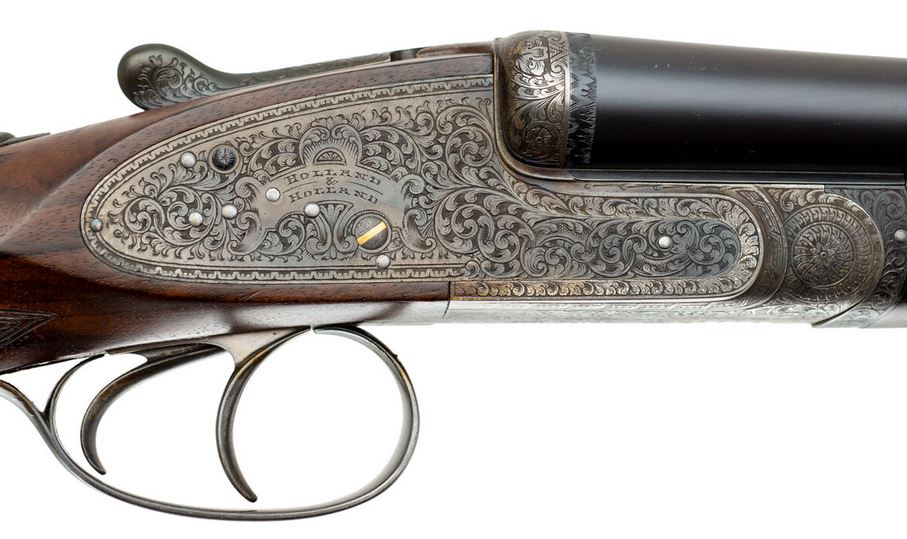 That’s the “Royal” model, and it sells for just under $50,000, second-hand.  You’re not paying for the action, by the way — Holland’s actions are made in Spain, not Britain — but for the barrels, the quality of the engraving and, of course, for the bragging rights that go with saying “I’ve got a Holland & Holland”.

So let me use this as another example of what I’m talking about.  And to make the proper comparisons, I’m going to be talking only about my favorite kind of shotgun:  side-by-side, double trigger, splinter fore end and smooth “English” grip, barrel length greater than 27″, like this example:

That Holland shotgun is undoubtedly gorgeous.  But it costs close to $75,000 NIB.  If you want the quality of the action, why not go with an Arrieta — the guys who until very recently made all the Holland actions?  You can get a matched pair of Arrieta 803 shotguns for around $15,000 new, and I would suggest that their engraving isn’t anything to sneeze at, either: 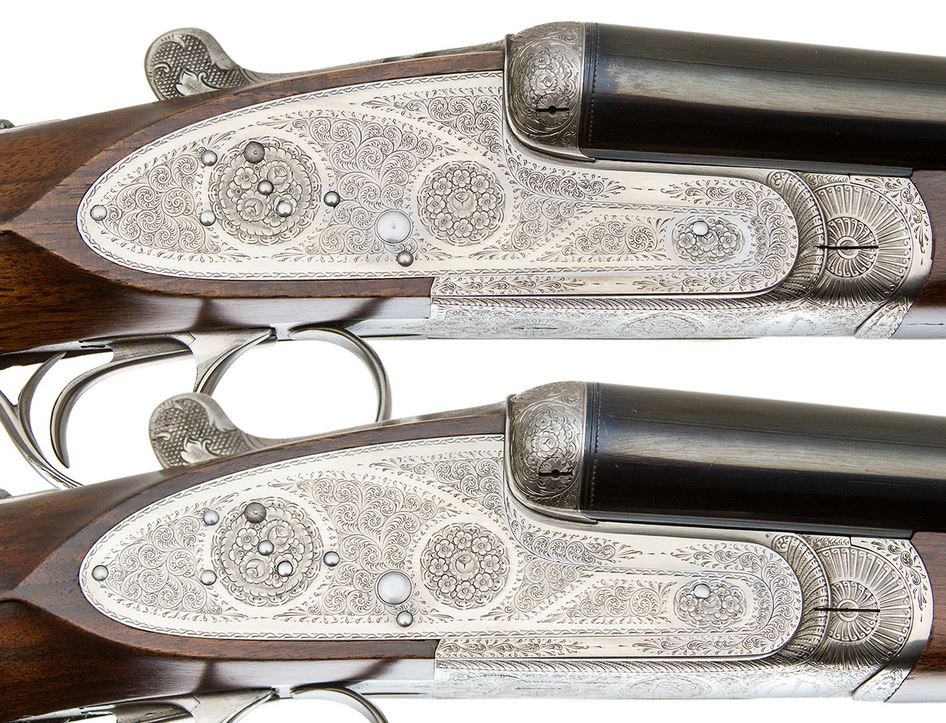 At least, you wouldn’t kill yourself if you dropped one of these off the back of the truck, as you might a Holland.

“But Kim,” I hear you say, “Even seven grand is too much to pay for a shotgun!”

Maybe.  In fact, you could always get a CZ Bobwhite: 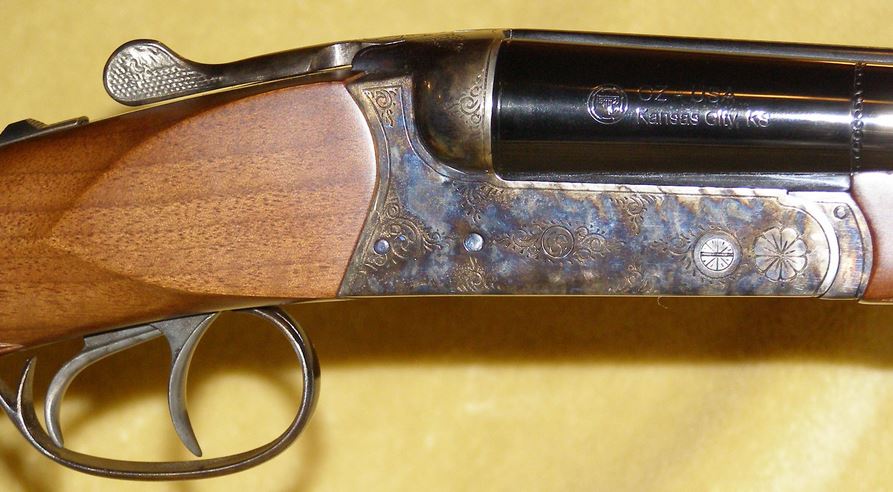 Of course, it’s not actually made by Česká Zbrojovka, but by the Turkish gunmaker Huglu — nothing wrong with that, they make excellent shotguns — and the “engraving” is actually stamped, not engraved.   The gun itself retails for under $600 at Bud’s, i.e. less than a tenth of the cost of an Arrieta and less than a hundredth of a Holland.  Is a Holland a hundred times better than the Bobwhite?  No.  There is nothing, repeat nothing wrong with the Bobwhite — in fact, I’m considering getting one myself, as soon as I can safely go back to work (in about 2030, according to best estimates).

Given my druthers. however, I’d prefer to get this Browning sidelock: 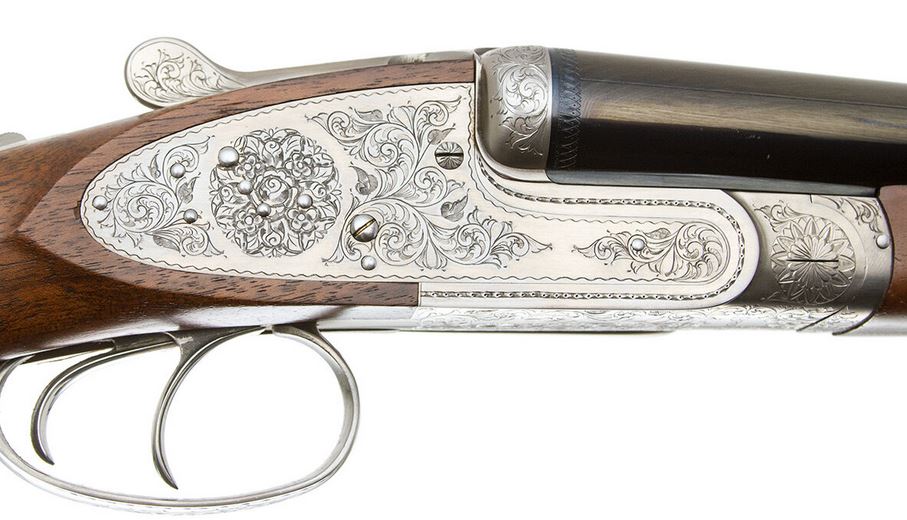 It’s gorgeous, made by Miroku in Japan and Steve Barnett is selling one second-hand for $5,750.  I just hope I can save enough to be able to buy it before someone else snags it.

Or else I’ll be disappointed, like the second guy who came into Collector’s to buy that Swedish Mauser.

You can always buy something that will get the job done, inexpensively.  But there’s nothing wrong with wanting something just a little better, either.