Longtime Friend & Reader Mark S. sent me this missive a week or so ago:

The attached is a photo of a high school classmate’s mother, taken at the Balboa Gun Club in the Panama Canal Zone (sometime in the 40s or 50s, I think). We were wondering if you had any guesses or opinions about the rifle and scope. The items near her right knee are cash bundles of her winnings in a competition. 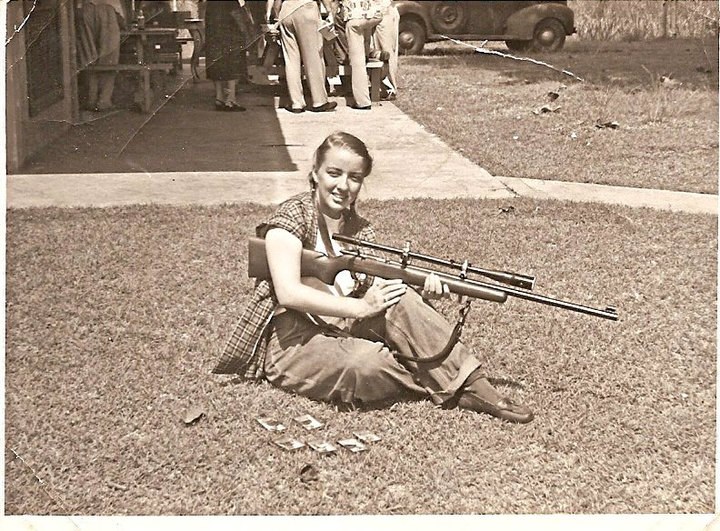 The rifle was no problem, and I identified it immediately:  a Remington 513 Target Master (513T), made from 1940 until the late 1960s.  (I actually had a chance to shoot one of these beauties when I helped the TSRA instructors get Son&Heir’s Boy Scout troop get their rifle shooting badges.  After they were done, the TSRA guys very kindly let me shoot off the rest of the .22 ammo they’d brought along.  One-hole groups and Big Smiles From Kim followed.)  Here’s a 513T exactly as used at the Boy Scout shoot, with a Lyman peep sight:

(The 512 model had a tube magazine, but was pretty much the same rifle.)

I would shoot this rifle against any modern commercial .22, even an Anschutz or CZ 455.  I might be beaten, but I sure as hell would not disgrace myself.

The scope was also easy, although I couldn’t figure out its magnification.  It’s the venerable Unertl, used mostly by the U.S. Marine Corps until late in the Vietnam War.

I suspect that the actual scope in the rifle club pic has 8x magnification, as it was the most common in civilian use (the USMC used the 10x).  And here’s a pic of the two together:

…and an unscoped Sporter model (essentially the same gun as the 513T, except that the bolt handle isn’t raked back) at Collectors, for just under a grand:

Ask me if I love this old tackdriver…