I see that Formula 1 has lost a boatload of UK viewers ever since they moved from free TV to subscription TV.  Time for Ye Olde Cluebatte:

If you’re going to require people to pay for something that they’re used to getting for free, it has be something they can’t live without, or else something which is “new ‘n improved” — i.e. that justifies the cost.

And Formula 1 has managed to go down ever since they stopped using loud, balls-to-the-wall engines, and pricing Everything F1 into the stratosphere.  In other words, the product has become tamer, less passionate and shittier, ergo not worth paying for.

I love Formula 1, love it with a passion, always have — but not  always will.  The plain fact of the matter is that after the first corner of the first lap, F1 races are nothing more than a 66-lap procession, where races can be decided on the time and number of pit stops, where refuelling midrace has been outlawed, tire types are restricted, and so on.  F1 has also become technocentric, and techno is expensive — which limits the number of teams which have the money or desire to participate.  As a result, there are essentially only three teams — Mercedes, Ferrari and Red Bull — who have any consistent chance of winning a given race.  Here are the teams’ points position at the end of the 2019 season, and note the points disparity between the top three and the rest: 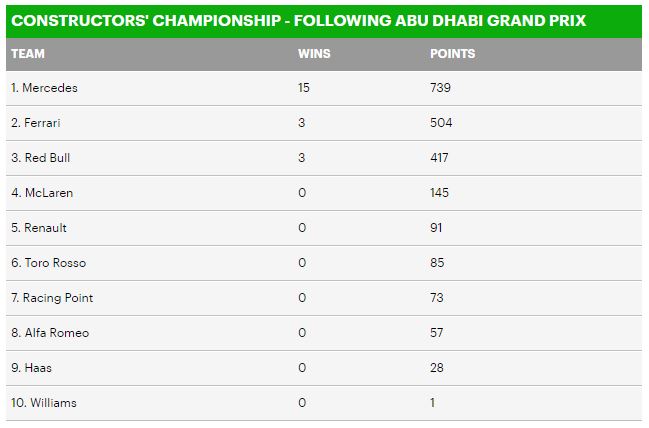 I have some suggestions.

There’s a reason that I’m suggesting all the above, and it’s not just a hankering for the old days (as is my general tendency).  As racing becomes all the more technical and much less human, people get turned off by the loss of human interaction.

In gun terms, it would be like watching a rifle-shooting competition between remote-controlled gun platforms made by only Mitsubishi and Honda.   I wouldn’t cross the street to watch that, for free.  And nor would many others.

That’s the problem, and all F1 needs to do is to bring back the human element into racing.  You heard it here first.