I can understand why people are getting all bent out of shape about this atrocity:

Own a rifle?  Got a scope to go with it?  The U.S. government might soon know who you are, where you live and how to reach you.
That’s because the government wants Apple and Google to hand over names, phone numbers and other identifying data of at least 10,000 users of a single gun scope app, Forbes has discovered.  It’s an unprecedented move:  Never before has a case been disclosed in which American investigators demanded personal data of users of a single app from Apple and Google.  And never has an order been made public where the feds have asked the Silicon Valley giants for info on so many thousands of people in one go.
According to an application for a court order filed by the Department of Justice (DOJ) on September 5, investigators want information on users of Obsidian 4, a tool used to control rifle scopes made by night-vision specialist American Technologies Network Corp.  The app allows gun owners to get a live stream, take video and calibrate their gun scope from an Android or iPhone device.  According to the Google Play page for Obsidian 4, it has more than 10,000 downloads.  Apple doesn’t provide download numbers, so it’s unclear how many iPhone owners could be swept up in this latest government data grab.
If the court approves the demand, and Apple and Google decide to hand over the information, it could include data on thousands of people who have nothing to do with the crimes being investigated, privacy activists warned.

What I don’t  understand is why people would want to get this poxy app in the first place, because of all the things you’re going to do with your hunting rifle, zeroing the scope is one of the easiest.  No?  Allow me to explain.

Step 1:  Remove the bolt from your rifle so you can see clear through the barrel.

Step 3:  Line your barrel up with a light source (street light, neighbor’s porch light etc.) that’s between 50 and 100 yards distant.  (If the latter light source, try not to let your neighbor see you pointing a rifle at his house;  for some reason, people get upset by this.  Sit back from the window.)

Step 4:  Anchor the rifle down so that the rifle is straight upright (i.e. the vertical line of the stock is at right angles to the floor).

Step 6:  Make sure that you can still see the light source through the barrel, and then zero the scope’s cross-hairs onto the same light source.  Re-install the bolt.

Your rifle is now guaranteed to “print onto the paper”, i.e. your shots will all fall within a 6″ square at 25 or 50 yards.

Step 7:  Zero your scope onto the bull, trying to get a 1″ minute-of-angle (MOA) at the distance you will most likely be shooting at (or just use 100 yards, as most do, and make further adjustments in the field as needed). 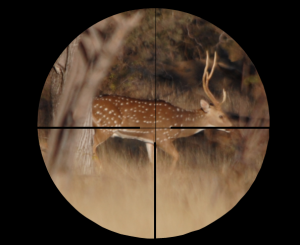 Now I know that this may seem a lot more tiresome a routine than just holding up your phone to the scope and letting some system do all the work for you, but as we are all fast learning in today’s world, what makes things more convenient is often either part of someone else’s profit margin (e.g. automatic gearboxes) or else malevolent (e.g. self-driving cars and, to whit, this scope zeroing app).

Giving your data to someone else has always been fraught with risk.  With this Obsidian 4 thing, it seems as though Gummint has found a great way to identify a large proportion of gun owners, simply by leaning on a couple of phone companies (who are always at the beck and call of gummint bureaucrats anyway).  What makes things easy for you makes things even easier for Gummint, as it turns out.

Oh, and fuck the DOJ.