Seems as though the Communist Broadcast System (that would be CBS  to you lot) has decided to cancel some TV show because it sucked.

CBS has decided not to renew the “modestly rated” but notoriously inaccurate military drama [The Code] for a second season, Deadline reported on Tuesday, just one day after the first season finale.

Whatever.  When I was flipping through TV channels on my DirectNOW service the other day, I discovered that CBS has withdrawn all its channels (including the “free” CBS broadcast channel) from the service (which, by the way, is the only service I’m allowed at my apartment complex, to my infuriated irritability because AT&T).  In the future, it seems, the only way I’d be able to watch any CBS channel is to subscribe to their poxy service.  Like that’s going to happen.

No great loss.  It’s irritating, of course, but not really a problem for me.  Other than golf’s Masters  tournament, there’s not a single fucking thing on CBS that I would watch for free, let alone pay for.  (And I’ll just stream The Masters  from somewhere — and if that’s impossible, I’ll just forget about the whole thing.  It’s not like golf viewership is going great guns anyway;  as Baby Boomers are starting to die off, their patronage of golf in general is not being replaced by the younger generations, so fuck ’em too.)

As it is, I’m rapidly getting sick of having to subscribe to every fucking thing I want to read or watch.  Netflix is getting the evil eye from me too, because frankly, their content is starting to suck.  (As with all this nonsense, the demand for content is quickly beginning to outpace the ability to create quality material, so I doubt I’d miss much.  Ditto the so-called “premium” cable TV channels.)

There’s not a single newspaper (paper or electronic) I’d subscribe to either except maybe Britain’s Daily Telegraph, but it doesn’t carry enough U.S. news to suit me.  (As an aside, I loved reading the dead tree Telegraph at Mr. Free Market’s place when I was there on my sabbatical, and if I lived in Britishland I’d subscribe to it in a heartbeat.)  As for American newspapers… oh please, they all suck.  Barely a week goes by without my getting some solicitation to subscribe to the Dallas Morning News, to which my stock response is:  “Stop publishing all that leftwing crap and I’ll think about it.”  It’s not like the DMN  was a quality paper to begin with.

And my habitual response when seeing something like this is simply to click the “Exit” button because I refuse to pay for the whole newspaper when I’m only interested in reading the (very) occasional article. 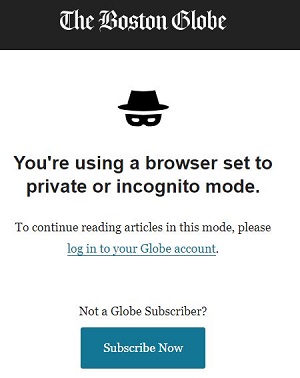 Not even if it’s a “free” subscription, because just I know you’re going to sell my info to every list strip-miner in the world.

Let’s face it:  the news business nowadays is awful.  It’s not just a political issue, either.  As that little pissant in the Obama administration said, young journalists nowadays know absolutely nothing.  My corollary is that the older ones may know a little more, but they’re  all rancid Commies like has-been CBS anchor Dan Rather, so why should I bother with any of them?

Oh, and by the way:  AT&T’s DirectNOW doesn’t offer One America News (OAN), probably the only news channel worth watching for more than five minutes.

Oh well.  Less time reading or watching bullshit-masquerading-as-news means more time available for the range. Just for the hell of it, I think it’s time to break out the old Browning 1885 High Wall (.45-70 Govt).

Now that’s  what I call entertainment.