Used to be that “VD” used to mean “Victory Day” — i.e. the day the war ended — but that doesn’t seem to be the case anymore, does it?

According to a report released earlier this year by the Armed Forces Health Surveillance Branch, incidence rates of chlamydia in service men and women more than doubled from 2013 to 2018, gonorrhea infection rates also doubled for men and rose by 33 percent for women, and diagnoses of syphilis were nearly three times the number just 10 years ago.

Of course, the brass is always ready with a “DUH!” statement:

Then again, maybe the higher incidence of disease in our modern Armed Forces is, as the article puts it, just a parallel of the population as a whole.

Of course, the pox (of whatever flavor) is a perennial problem for any  of the armed forces, whether invading armies, fighter jocks [sic]  or dockside navies, as whores have always known that randy young soldiers of whatever branch are a prime target, so to speak, for their eager little cashboxes.   And everyone, especially the military brass, knows it. 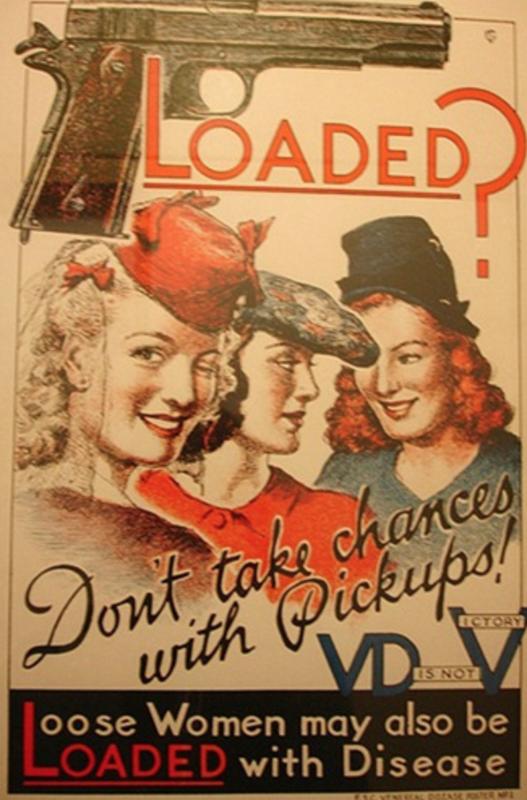 I recall reading somewhere that the British army sent to Spain and Portugal to oppose Napoleon’s Grand Army suffered infection rates of around 35%, but maybe that’s a feature of Spanish- and Portuguese totties, not to mention the ineffectual / non-existing prophylactics of the time.

And even the Edwardian-era U.S. Expeditionary Force sent to France in WWI became a walking pox factory, despite the Puritanic nature of American society at the time.  As the song put it, “How Ya Gonna Keep ’em Down on the Farm (After They’ve Seen Paree)?”  (Translation:  now that they’ve experienced the French flavor of booze and debauchery, they’re not going to listen to us when we tell them to be sober and chaste back home.”)

My favorite line, though, is that of the late Spike Milligan who, in recounting his artillery unit’s preparations for the invasion of North Africa in 1942, pointed out that each soldier was issued a single condom prior to landing.  Milligan’s comment:  “One? One?  They must have been expecting a short war.”

‘Twas ever thus.  The distinctly modern take on the increased poxiness of our modern Armed Forces is that it seems to be about the same for both male and female soldiers — which equality no doubt pleases Teh Feministicals greatly, but which I for one find ineffably sad.