Over time, we’ve come to realize that A Pathway In Monet’s Garden  is too big for the dining room.  (It was originally intended for the living room, but plans changed and a better thing was found.)

So yesterday morning we decided to mothball the Monet, and put something else up in its place.  So off we went to iCanvas, my favorite place to buy art online.  Rather than getting just another Monet (there are four in the house currently), we decided to look instead at Impressionist paintings set in portrait format rather than landscape, with no regard to the artist.  Hours passed by, paintings considered and then discarded (wrong color, wrong mood, wrong style, etc.) until we stumbled onto this: 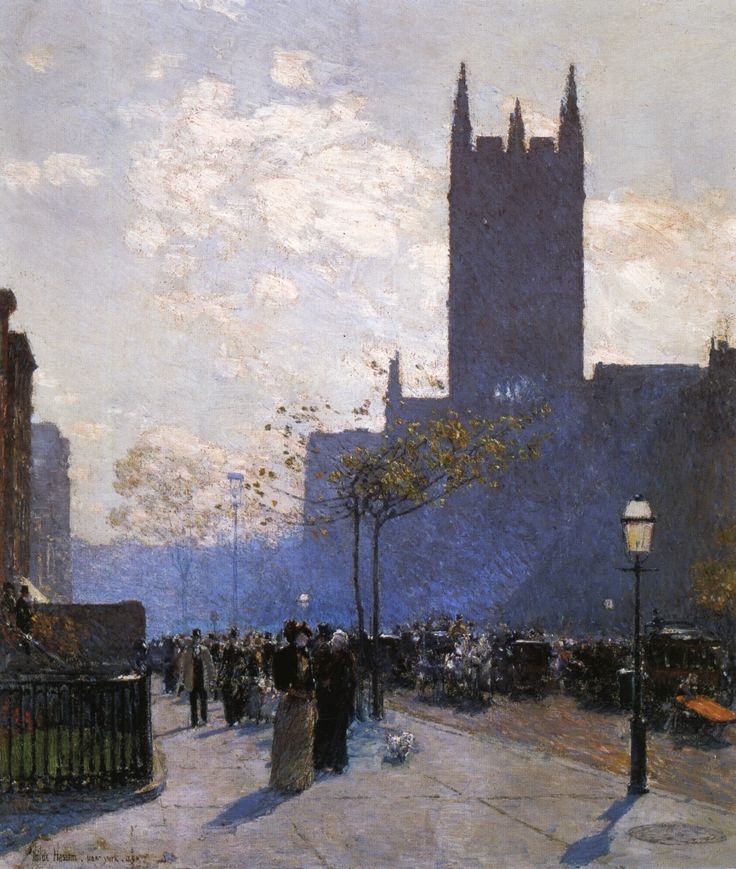 Wait a moment.  Who is this “Childe Hassam?”  I’d never heard of him/her (him, actually), so I went to his page at iCanvas and looked at his works, which numbered over a hundred.  I like almost all of them — which meant I had to look to see whose work I was enjoying so much… hello, Wikipedia.

Wait… an American Impressionist?  And I had never heard of him before?  And (wait for it) his paintings were all done during the late 19th- and early 20th century, which as any fule kno is my favorite period of history;  and in all, he produced over three thousand  works… BINGO!

What I like about Hassam is not just his technique, which is excellent, but also his choices of subject matter.  Unlike many Impressionist painters (hello Monet and Cezanne), Hassam painted a dizzying variety of subjects:  landscapes, cityscapes, models, you name it;  he used both watercolors and oils (!) and over all that, he also covered a multitude of colors and moods.  Here’s A Room Of Flowers : 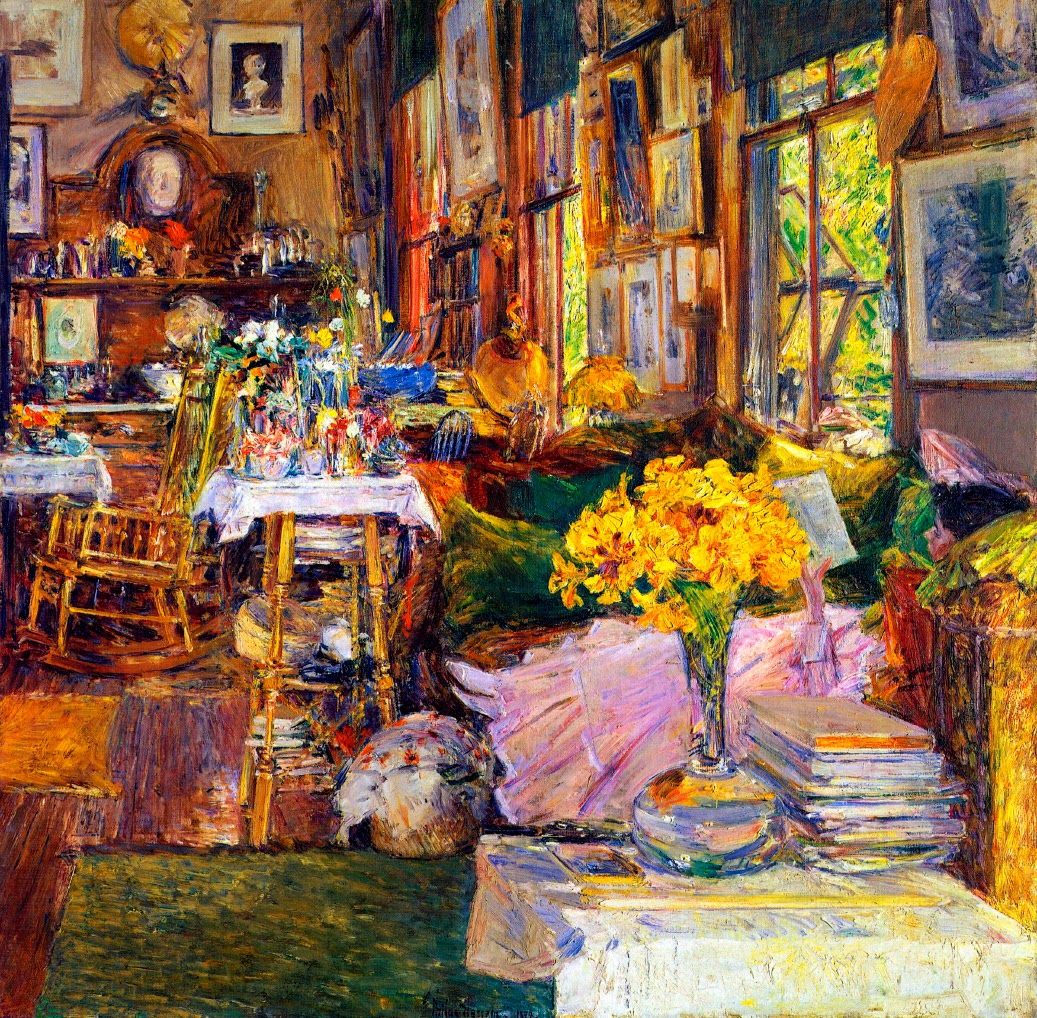 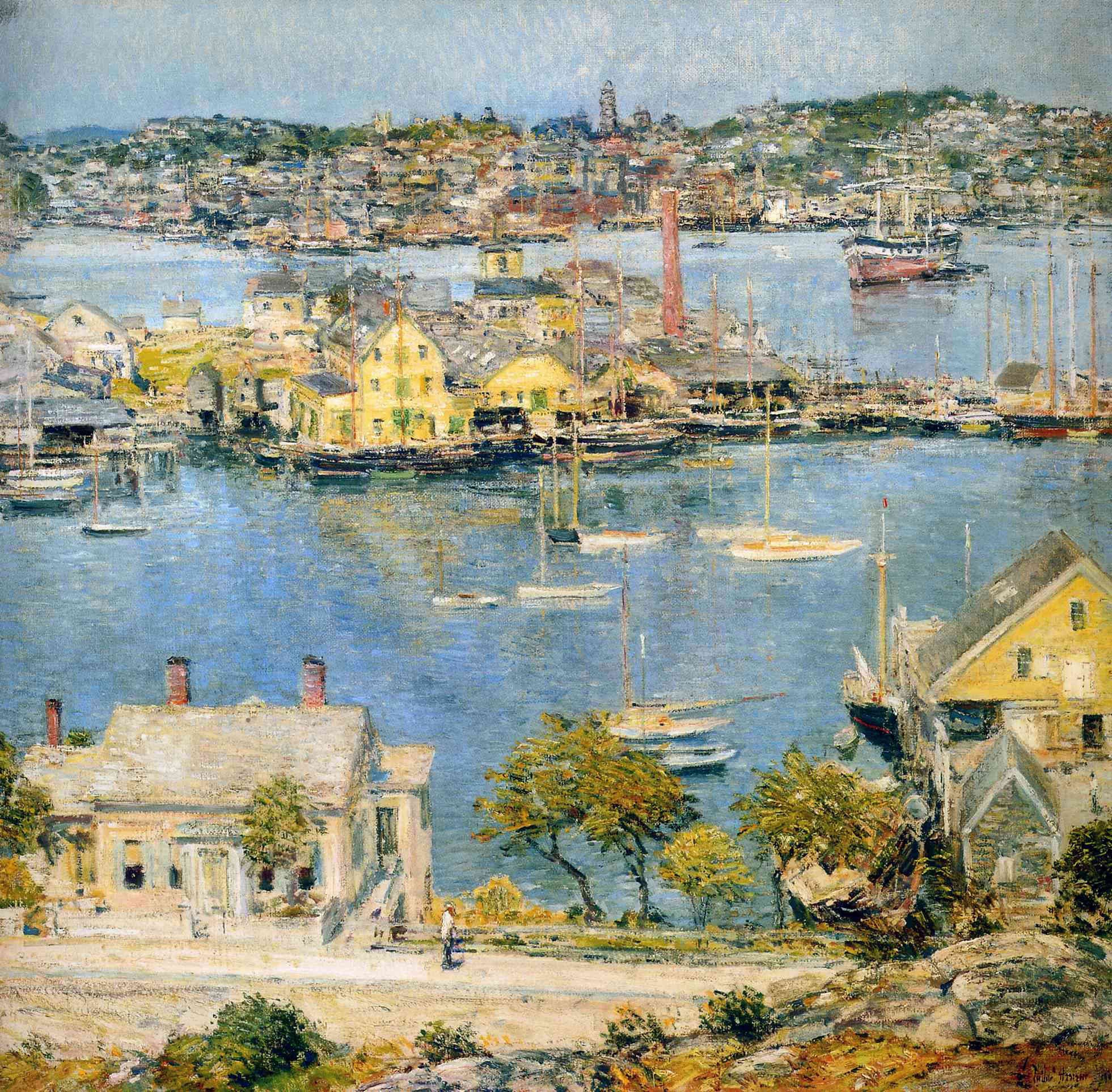 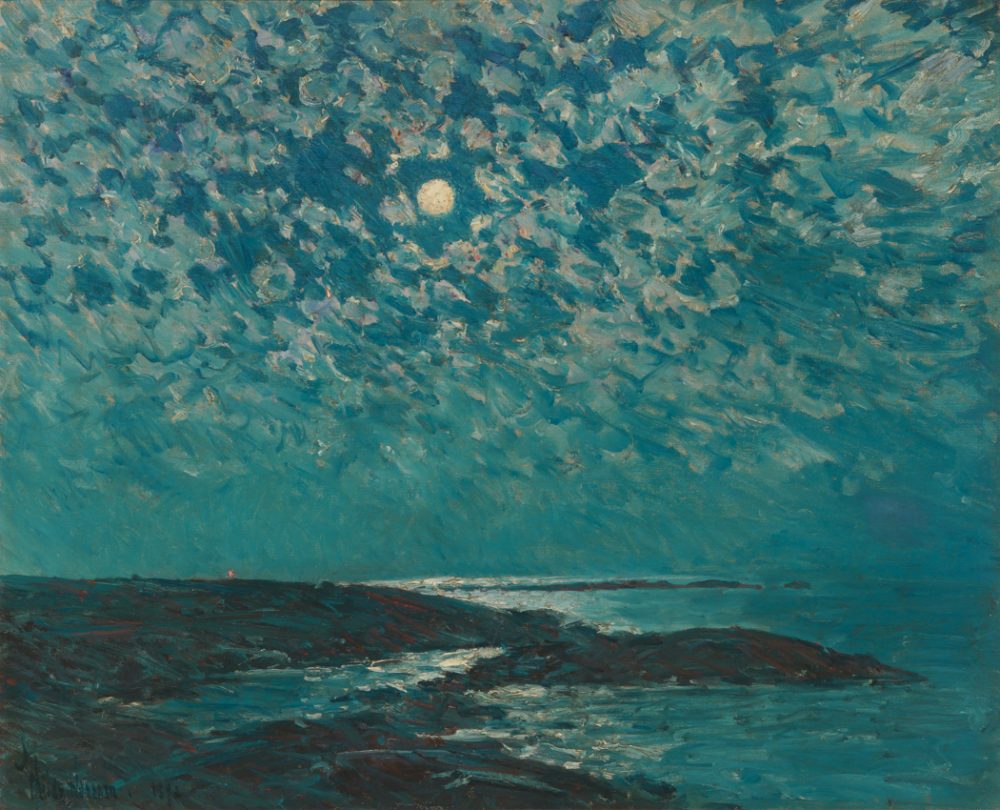 …and in one of many abrupt changes of both topic, color and mood, Taxi Rank on Rue Bonaparte  (which I love but The New Wife doesn’t, alas): 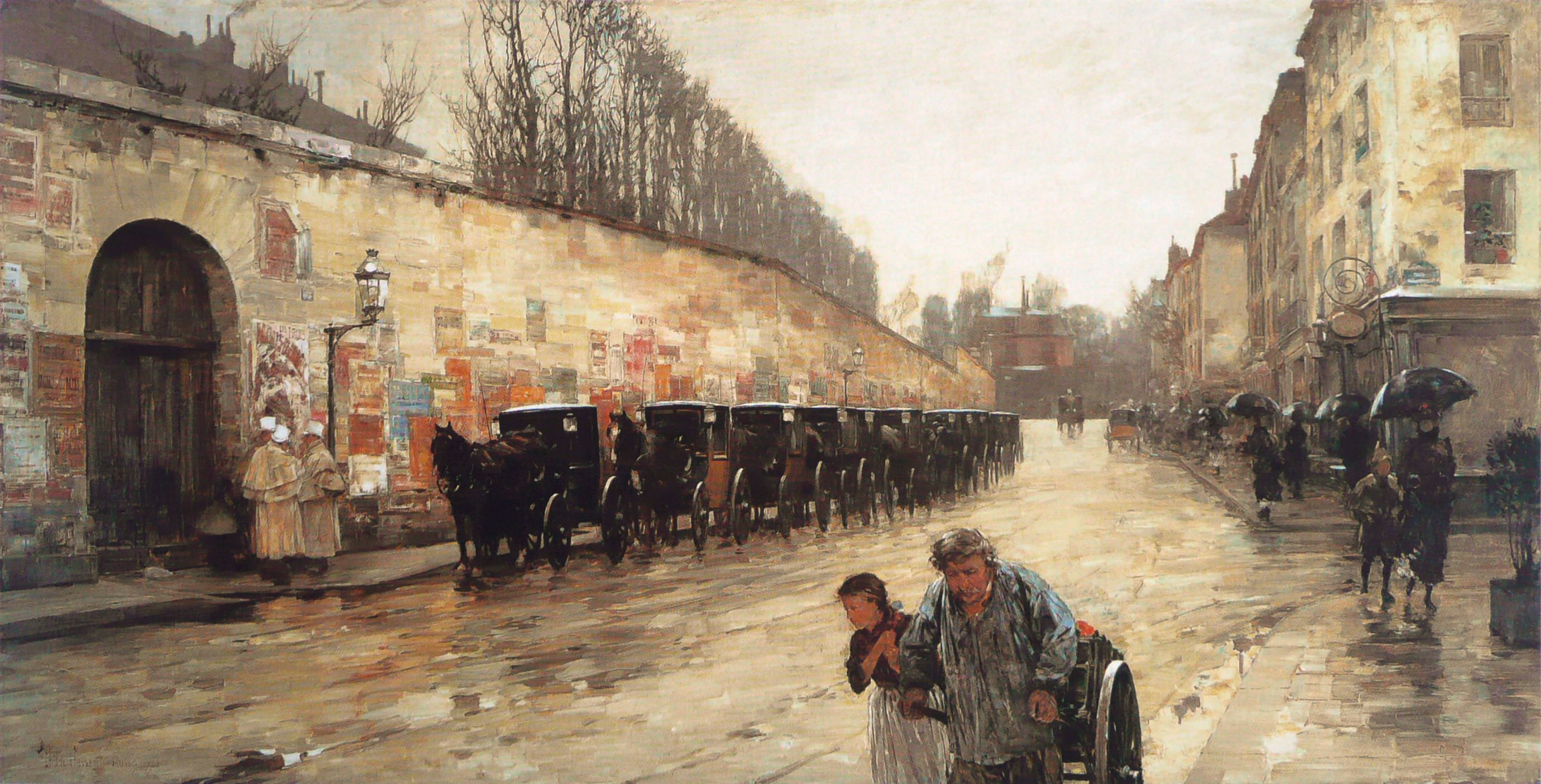 …and continues the theme with Rainy Day, Boston : 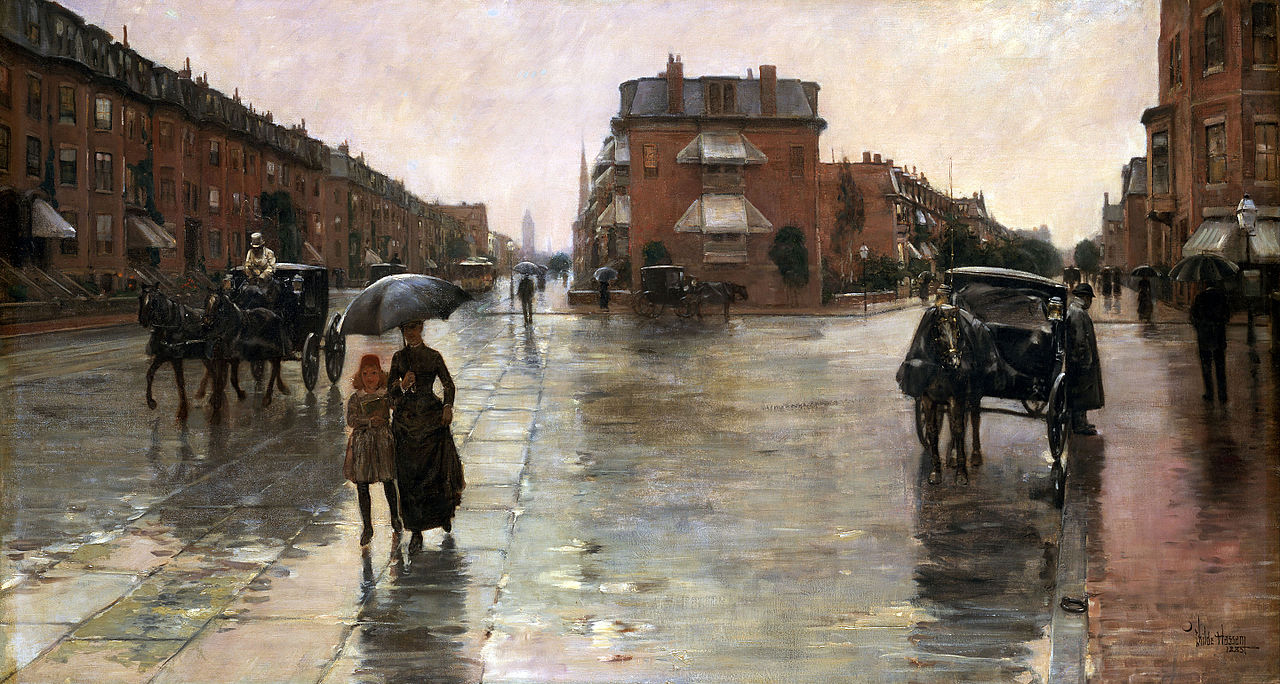 Yes indeed:  our American painter didn’t restrict himself to the U.S.A. at all (although he painted the New England and Pacific Northwest seascapes, to name but two).  Rather, his work also covers France, Italy, and all points in between.  Wherever he found himself, he painted it.  To our great advantage.

Because if you like Impressionism but can only see so many paintings of haystacks (ahem), I bet you’ll find a Hassam painting that will be right up your street.  Maybe like this one, The Water Garden : 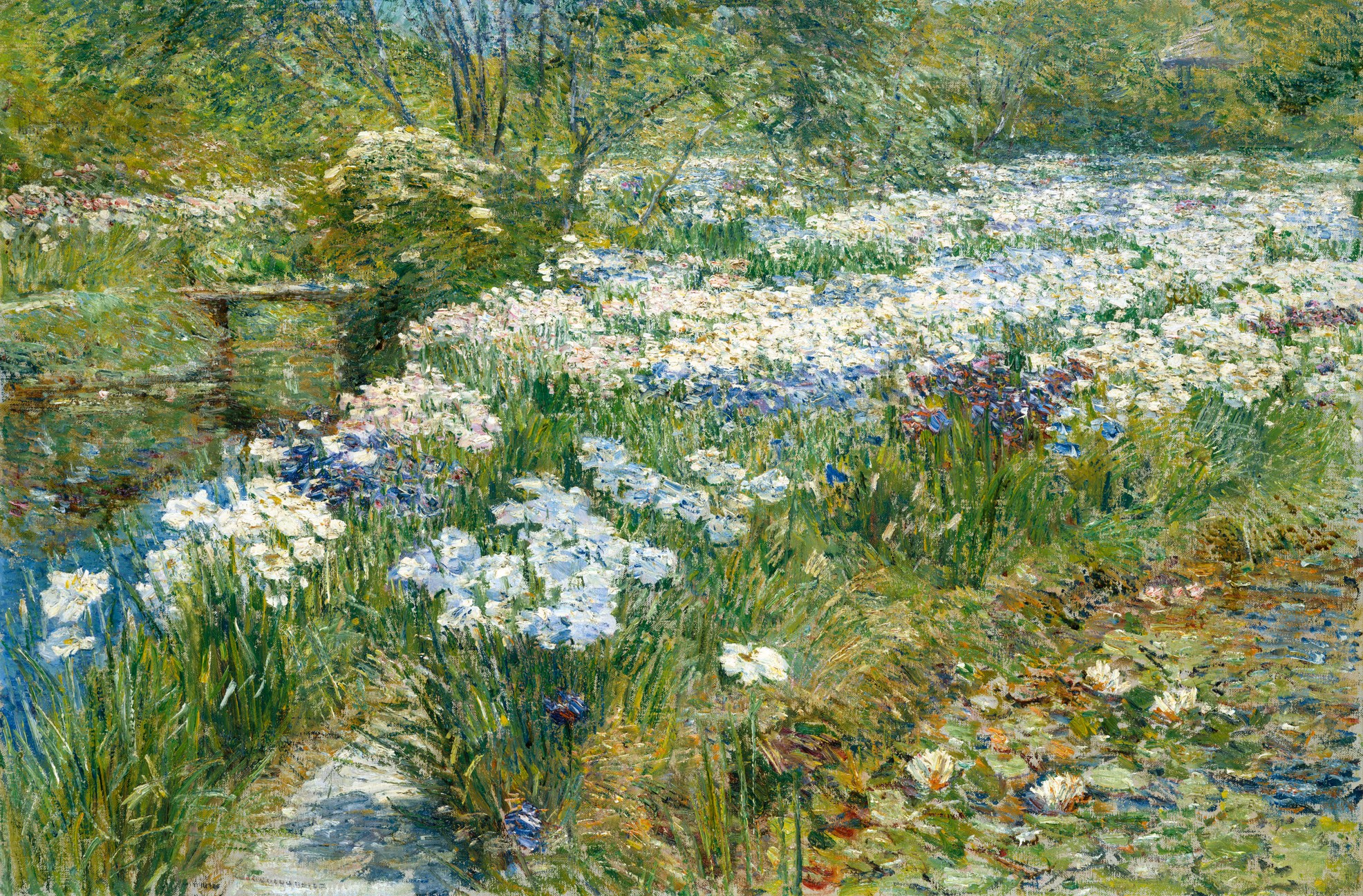 …or even Church At Old Lyme, Massachusetts (of which, unusually, he painted several seasonal variations): 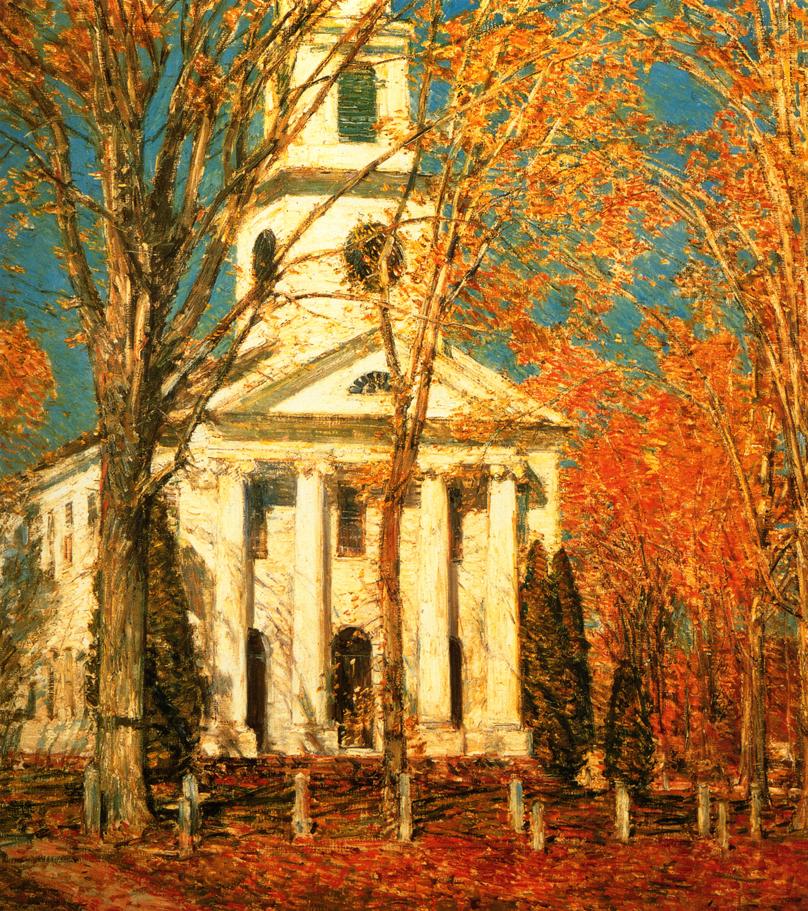 …never mind his patriotic “Flag” series, like for example Fourth of July, 1916 : 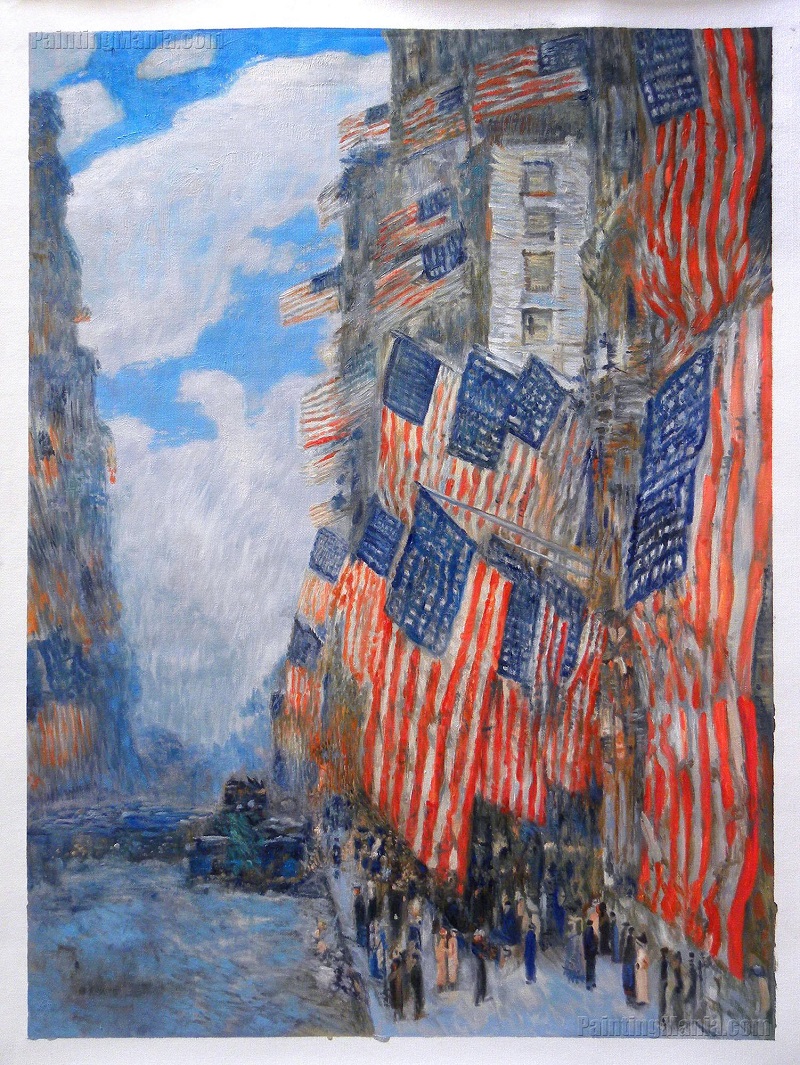 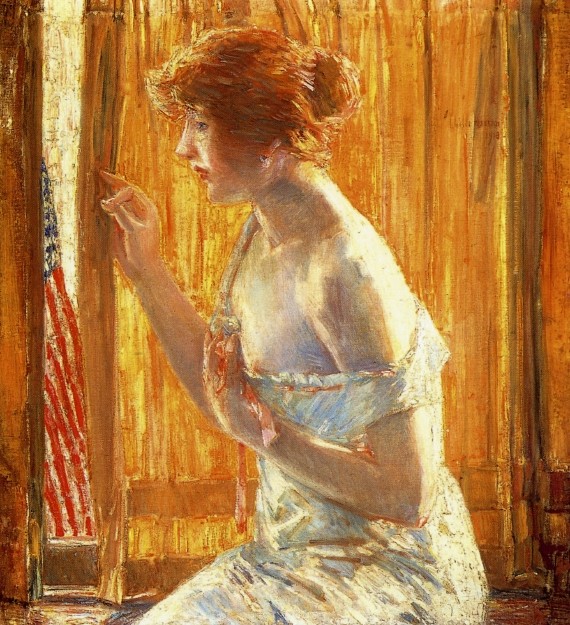 …which is also sometimes called The Flag Outside Her Window. 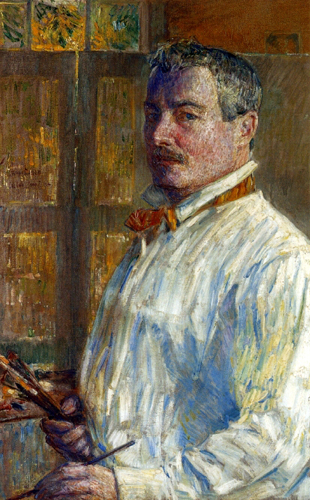 Oh, and for people (like me) who loathe Modernism, allow me to quote his attitude thereon:

He denounced modern trends in art to the end of his life, and he termed “art boobys” all the painters, critics, collectors, and dealers who got on the bandwagon and promoted Cubism, Surrealism and other avant-garde movements.

“Art Booby”… I am so  going to steal that for myself.