One of the (oh so many) bad things that came out of the Obama Years was that the word “trillion” (as in, “this will lead to a national debt of x trillion”) became normalized, in the way that after WWII, the word billion  became a substitute for million  in government-speak.  (I remember the rueful joke made in the early years of the Obama presidency, when the deficit and debt skyrocketed:  “What comes after a trillion?”  “Whatever it is, just don’t tell Obama.”)

Thus, when we learn that the  suggested policies of the radical Left will cost a hundred trillion dollars, we are somehow less alarmed because a “hundred” of something — anything — doesn’t sound like much.

And because Leftists (whether socialists, communists, Democrats, whatever) have a fairly cavalier attitude towards money (AOC:  “We’ll just create more!” — like that’s a simple exercise), this escalation of the quantity of money and the accompanying devaluation of the terminology just becomes another means whereby they can disguise the true effect (and intent) of whatever nonsense they dream up next.

It is hardly surprising, therefore, that both groups are core constituencies of the Socialist Party, here and elsewhere.

It is we poor bastards in the middle who are going to get shafted, viz.: 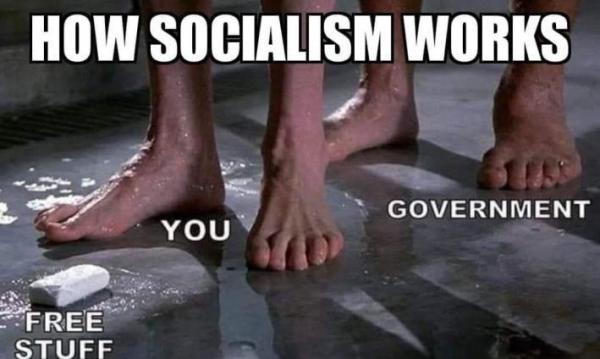 I don’t want you to think that I’m making a damn joke about this, because I’m not.  At some point, and soon, there’s going to be a financial and economic reckoning — and we of the middle class are going to lose everything:  houses, jobs, savings, retirement benefits, the lot.