I wonder if women ever stopped to think why stuff like this used to happen (before such signwriters started getting carted off to feminist-think reeducation camps, that is): 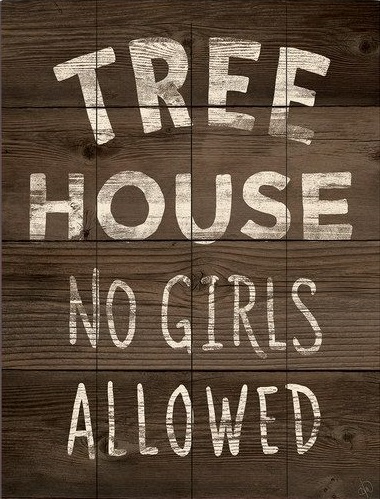 I’ll tell you why.  It’s because we boys had a great time together.  We got up to mischief, fought each other (physically and verbally), played dangerous games and (at the early puberty stage) talked about sex.

Let a damn girl into that idyllic scenario, and all that cool stuff ended, because the girls didn’t want to do any of it — and worse, if we went ahead and did it all anyway, they’d run and tattle to the grownups.

So rough boys’ games turned into gentler, girl-oriented games (which no boy wanted to play), fights weren’t allowed and mischief or dangerous games were prevented by the dreaded words, “I’ll TELL!”

Girls were (and are) a royal pain in the ass.  Hence the signs.

Now take childhood exclusion and apply it to adult life — oh, say, to the Army.  What could possibly go wrong?

What red blooded American male would want to serve in a US military of drag queens, cadets in red high heels, Mommy Rangers, lactating chicks in the field and waddling battalion commanders?
There’s a known fact that the feminist crowd would like to keep buried, like those Green Cards for those Ranger tabbed ladies that Benning hides so well – any industry women take over, men leave… in droves.
The future of the US military is a broken force, a devastated force, if anything is left at all on some distant battlefield.

But hey… who cares, as long as Teh Womyns feel better about themselves?

I used to be fairly agnostic about women who served in the military, provided that they were kept away from combat.  Well, they were allowed to join the armed forces, and because being non-combatants (cooks, drivers, clerks etc.) was demeaning, and patriarchal, and all that proto-feminist twaddle, of course they had to be allowed to do things like try to graduate from Ranger School — and because they always failed, the natural outcome was to lower the standards so that women could eventually pass and feel better about themselves.  Never mind that guys would look at this, say, “That’s not a challenge,” and leave.

Now I have a simple solution:  toss them all out.  Everywhere.  From the combat units, air force squadrons, clerical jobs and most especially, the Navy.  Make the armed forces a man’s world again.  Morale will skyrocket, G.I. pregnancies (and the concomitant costs) will become a thing of the past, fitness and duty standards can be raised to the skies, and our armed forces will become the envy of the world, just like they were during WWII.  My prediction:  men will flock to enlist in the armed forces for the same reason that “No Girls Allowed!” clubs always had a long waiting list of boys from the neighborhood.

And gawd forbid that I breathe these forbidden words:  the United States will then field a ferocious bunch of kick-ass fire-breathers who will cause would-be enemies to shelve their plans of aggression and run back to their Momma.

Si vis pacem, para bellum.  And admittedly, while men often screw up the pacem business, nobody can fuck up a good bellum like a woman.  ‘Twas ever thus.