I was recently triggered by an article (linked by Insty) which contained this little gem: 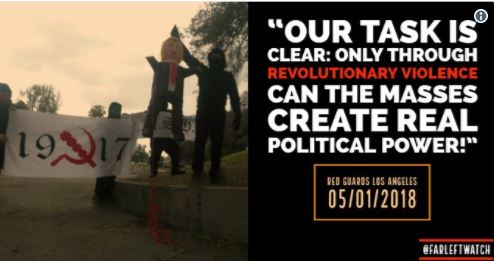 Here’s the actual bullshit, in its entirety:

“We stand in solidarity with the Red Guards and principally Maoist collectives who are working towards the creation of the Maoist Party. We stand in solidarity with Maoist parties across the world who are committed to building socialism and fighting revisionism through People’s War!
“What needs to be done is the concentric construction of the three weapons of revolution: the Maoist Party, the Maoist People’s Army, and the Maoist United Front. What needs to be done is to militarize the masses and all the pre-Party Maoist formations!
“We must prepare today, yesterday and tomorrow for the prolong confrontation, the protracted war, against the capitalist state. We must carry out military actions against the enemies of the people!”

Ummm when I said I was “triggered”, that doesn’t mean I was offended or whatever the snowflakes normally mean. What happened is that I burst into great shouts of laughter which frightened the neighbor’s cat off the fence.

Listen, you little Maoist pricks: do you know that the “masses”, as you call them (about a hundred million people), are already pretty militarized? More to the point is that when you start carrying out “military actions against the enemies of the people”, tens of millions of your “enemies” will probably shout in a single voice: “The day has come, hallelujah! It’s Zombie Killin’ Time!” whereupon you sorry little bunch of insects are going to see exactly what “violence” means.

Do you actually have any idea what kind of whirlwind you pathetic Commies are going to reap? Do you have any idea how many goobers (like me) have been just waiting to settle that old argument once and for all? (The old argument being: “which would be more effective in killing Commies: the AR-15 or AK-47?”)

The problem is that you Communist tools are still stuck in the past, when the peasants were unarmed and only a few of the “vanguard” were necessary to terrorize the population (with the help of the army). Now, however, after over 100 million deaths caused by Communism, we know exactly who the enemies of the People really are: they’re the Communists, and the army is on the side not of you Commies, but on the side of your supposed “enemies” — the capitalists. If you don’t believe that, you have a rude awakening coming on the Glorious Day. (It’s gonna be glorious, all right — just not in the way you think.)

So good luck with that, assholes. Me, I’m off to the range. My sniper rifle isn’t going to zero itself, nor will my AK be able to dump a full mag into the sweet spot of a (human-shaped) paper target without the shooter (that would be me) being completely “regulated” in its use. (You may want to look up the actual meaning of the word “regulated” in its original placement in the Second Amendment, by the way.)

Don’t get me started on my 1911, which has been looking at me piteously for two whole weeks, begging for an outing.

Hmmm… maybe I was “triggered” after all; certainly my trigger finger started to itch uncontrollably as I read their little manifesto.