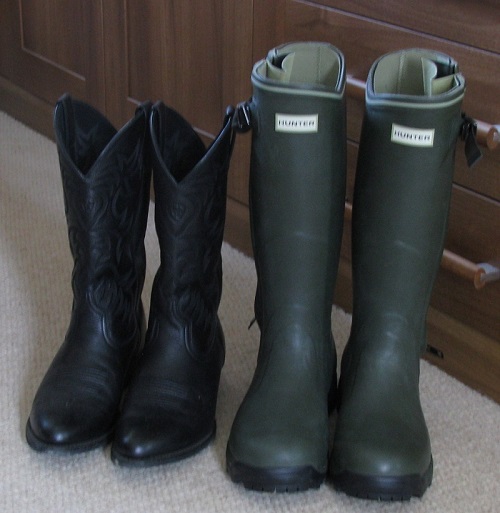 Now let me explain why the ugly green ones on the right are not an affectation in These Yerrrr Parrrrts (as they call it here).

For most of my trip thus far there has not been a drop of rain fallen on my head. At least, not while I’ve been awake. So all my excursions have been dry, so to speak, and I’ve even been able to wear my Minnetonka moccasins (Kim’s go-to footwear) on a couple of shopping trips.

Then last night it rained — buckets, apparently — but I barely noticed it because I was sunk in semi-drunken slumber after Mr. FM and I had semi-indulged, so to speak. Today dawned bright and clear, but hidden underneath the oh-so green grass was… mud.

Good grief. It wasn’t just yer everyday sandy Texas mud; oh no, this was vile, clingy, chalky mud, the kind that needs not washing off but chiseling off if allowed to dry on the shoes. Anyway, after but a few steps in this stuff, my boots had completely disappeared into snowshoe-looking things of brownish gunk — it took the shoe boy almost an hour to clean it off (and if you look closely, you can still see a trace or two on the soles of my cowboy boots; I dare not tell Mrs. FM of this shortcoming or else the hapless youth will be flogged again).

Clearly, one needs a different kind of boot out here, so Mr. FM took me “wellie-shopping” at an emporium known as “Countrywide” which caters to the farm- and country-folk. And this was how I knew I was in Hardy Country.

You know how in Shepler’s Western Wear stores there’s an entire section dedicated to cowboy boots of all shapes and styles? That’s Countrywide’s policy towards Wellington boots (as rubber rain boots are known in Britishland). Yikes. And just like cowboy boots, wellies range in price from $100 a pair to $500 — and Mr. FM pointed out that “bespoke” wellies can demand still more than that.

I decided to go for fit over price: my sturdy calves (“more like full-grown bulls”, as my old dad once said) have given me trouble with tall boots all my life — but wonderfully, the wellies which fit me best were a “budget” brand which cost me only about $120, and are the ones featured in the pic above.

As for the bilious color of the things: Mr. FM assures me that hunter’s green is by far the most popular shade out in the field, as evidenced by this picture of his hunting party*, taken last year. Note the overwhelming choice of footwear: 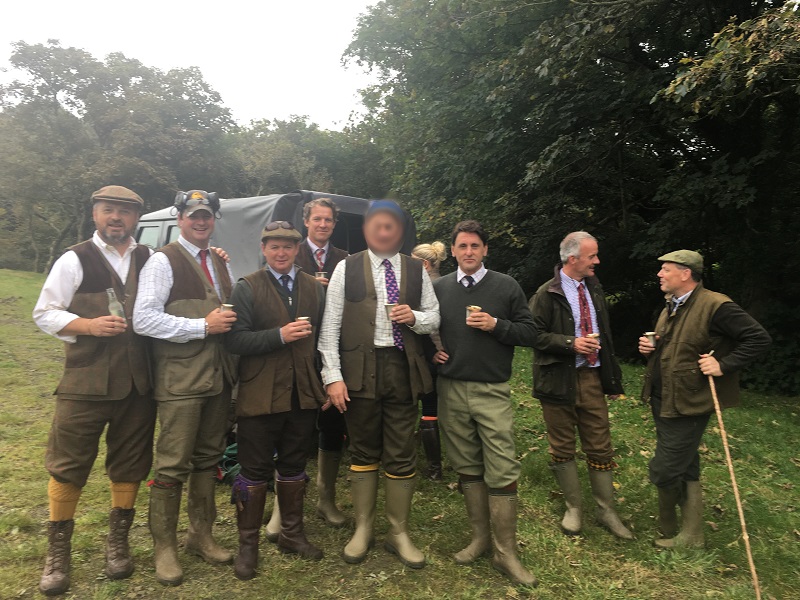 So that’s okay, then.

*The bloke on the left (shirtsleeves rolled up, tieless and not wearing wellies) is apparently Lord Freddie Someone-Or-Other, whose family was given permission to be thus casually attired by the King, back in 1800 or something.