A dinner party is not a place where I want to engage in deep philosophical discussions, or intense socio-political debate. At a dinner party, I want to be entertained, and the wittier, more erudite guest will always get the nod ahead of someone like, say, Thomas Sowell, who is beyond-words brilliant and a wonderful person to know withal. (My respect for Dr. Sowell is immense. I’ve read pretty much everything he’s ever written, and whenever I see one of his articles online, it’s “drop the baby and get over there” time.) But while Sowell is a brilliant man, he’s not a polymath like I am — most experts are pretty focused on their areas of expertise — and nah, I want a guy like myself, who’s interested in everything, the kind sometimes called a “Renaissance Man”. 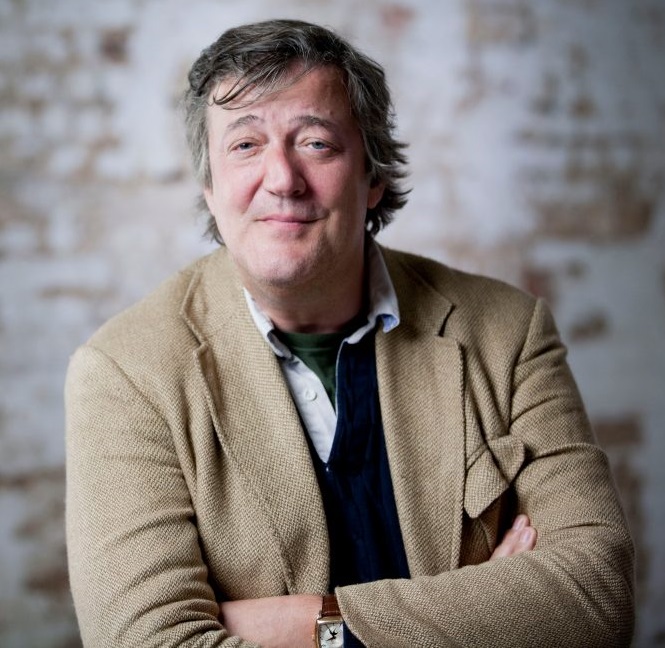 Let me get all the irrelevant crap out of the way. I know he’s a fussy old queen (his self-description, by the way), married to a much younger man, and all that. He’s also a screaming liberal, like so many of his ilk, and is manic-depressive. Don’t care. I still want him at my dinner table.

Fry has done, and plans still to do more things than most people would dare to tackle in several lifetimes: actor, author, comedian, quiz show host, documentary filmmaker, playwright… the list goes on and on, and includes “prisoner”.  (He’s also the only man in existence who managed to stop the irrepressible Robin Williams in full comedic flight with a single quip — on Michael Parkinson’s chat show several years ago — a feat which not even the great Johnny Carson ever achieved.) He has an exquisite sense of humor, and like his personality in general, his humor can be gentle, academic, barbed, laugh-out-loud funny, acerbic, subtle and downright deadly, depending on which is most appropriate for the occasion. All you need to see is how he handles the unmanageable talent on the BBC Two quiz show QI, which he hosted for years and which is the only quiz show that’s ever been able to hold my attention for more than a few minutes, let alone binge-watching (to which I plead guilty as charged).

Fry’s erudition is daunting: multilingual and with what seems to be an eidetic memory, he is capable of talking knowledgeably and wittily about almost any topic under the sun, especially when it comes to art, music, history, language, literature and culture in general. (My favorite example of this was on QI, when he was telling a story which involved a guest at his home, and Fry admitted that he just happened to have an orchestral score for an opera lying on his study table — to which comedian Bill Bailey, no mean Renassance Man himself, expostulated, “Of course you did, Stephen!”)

I’ve often been called a Renaissance Man because of my wide-ranging interests and pursuits. Compared to the astonishingly-intellectual Stephen Fry, however, I’m a complete barbarian. I can but try to emulate his example — not the homosexual part, though — and one day, I hope to invite him to my dinner table.